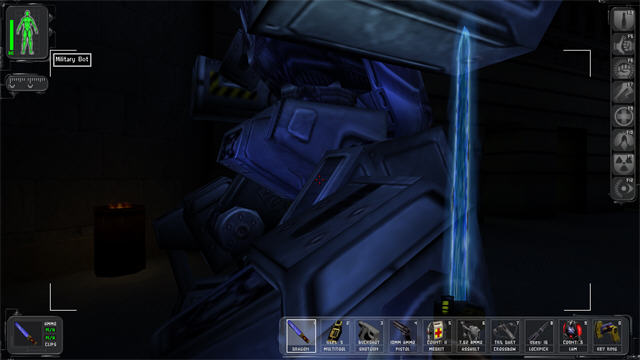 The chapel is well guarded. The number of enemies I’m facing is definitely growing in each mission and there are bots all over the place. I take out this big one with my usual back attack. The little ones rotate too fast for this to work and are more dangerous though. 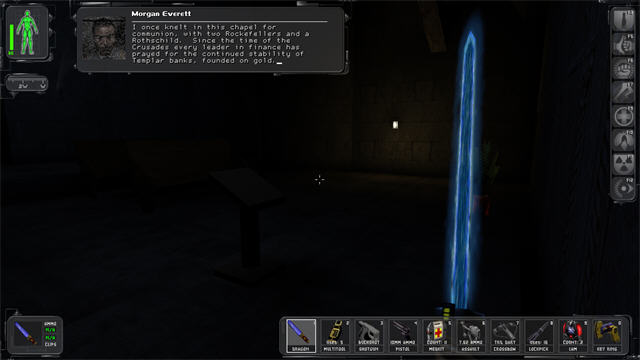 I blow up the door to the chapel and take cover while the bots are elsewhere. Everett is now taking over Tong’s role as tour guide. 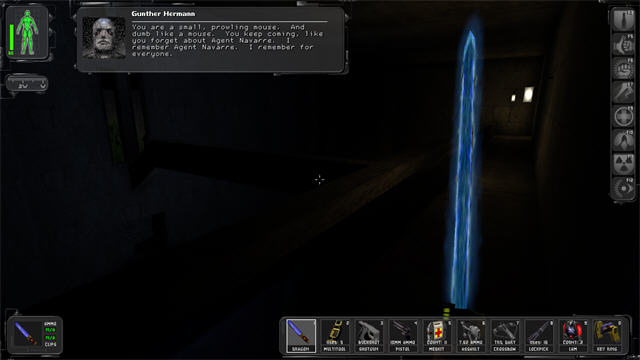 I also get a message from Gunther who appears to be around here somewhere. This showdown has been coming for a while. 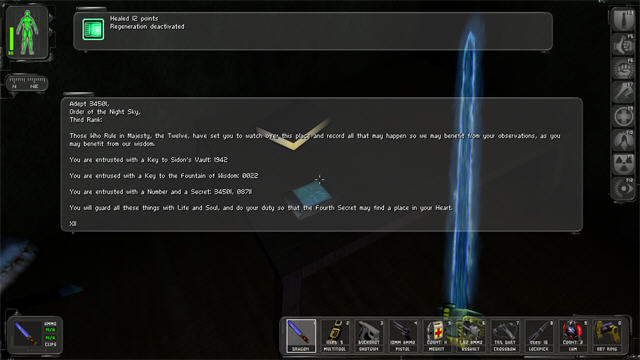 The cathedral is a confusing maze of stairs and corridors. I climb up and down a couple of towers, then make my way into a central vault where a woman in black is keeping all the door codes. 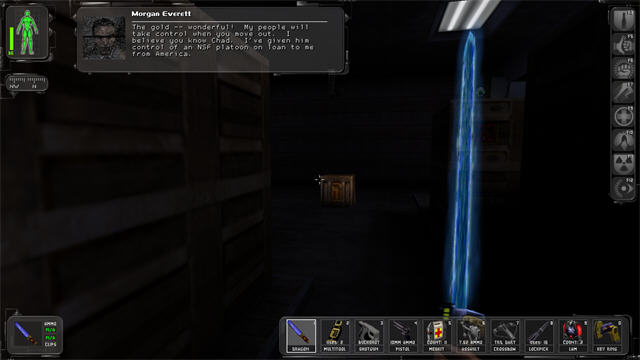 The first of these opens up another nearby vault which contains the missing Templar gold. This was one of my subquests. 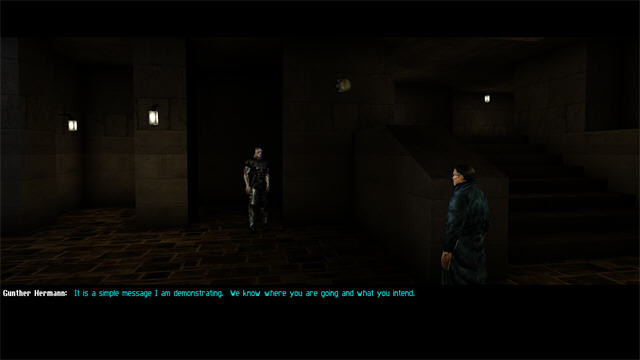 The other code gets me to Gunther who is waiting next to the computer I need to access. He has been upgraded for this mission but I take him down very quickly with my assault rifle. I’ve upgraded my rifle weapons skill to maximum and it’s absolutely lethal now, with no wait for the crosshairs at all and far more damage done. It appears to be better to master a weapon than to put skill into several as the damage I can dish out went through the roof with the last upgrade. 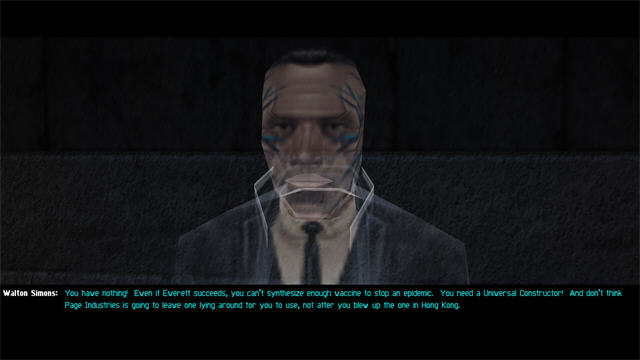 I upload the data to Everett and Simons appears in the holographic rig behind me. He points out that we still need a universal constructor and have nothing. He also threatens me with the prospect of facing someone with my own abilities next time. 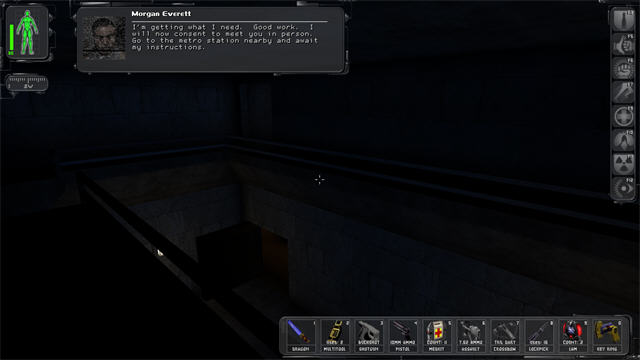 Everett has his data and agrees to meet me in person. I have to go the metro station just outside and meet up with one of his allies. On the way I get another message from someone or something called Icarus. Everett tells me that it is a MJ12 AI but he can protect me for another day or so. 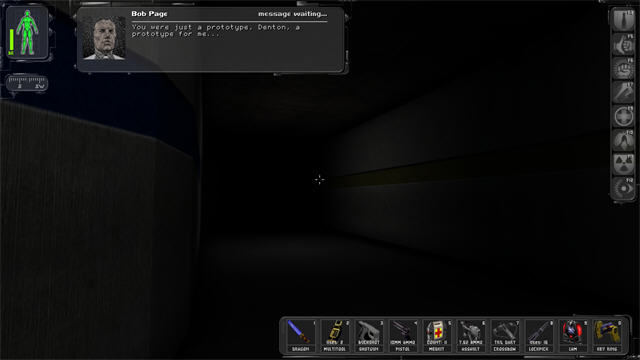 I also get a message from Page who claims that I was a prototype for him. That will be the boss fight at the end of the game then….. 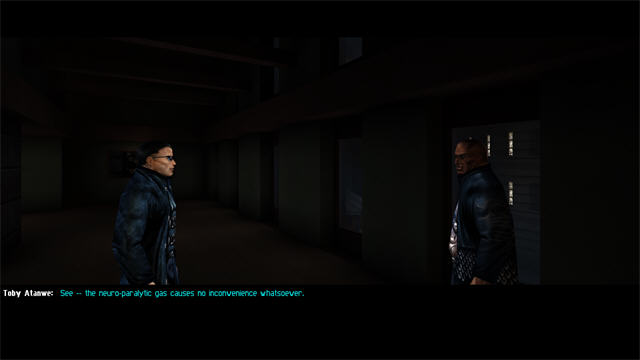 Everett’s associate meets me, then gasses me (after I sort of give consent) so that I won’t know how to get to Everett’s house. I wake up there anyway but have to wander around the house on my own to find Everett. 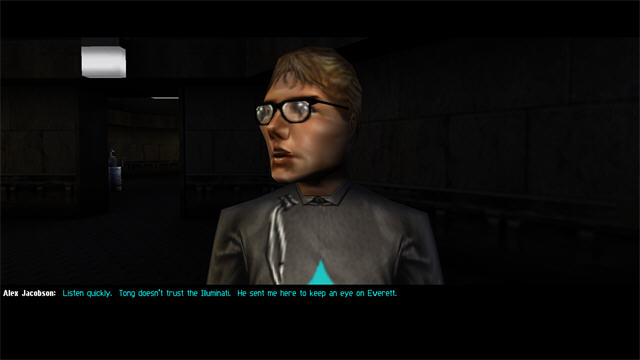 My old buddy Alex is working here now. He quietly confesses to be keeping an eye on Everett as Tong doesn’t trust him. The good news is that Everett has managed to design a cure though so he is more on the right side than the likes of Simons at least. I also learn that Tong has left Hong Kong and it sounds like he has caught the Grey Death. 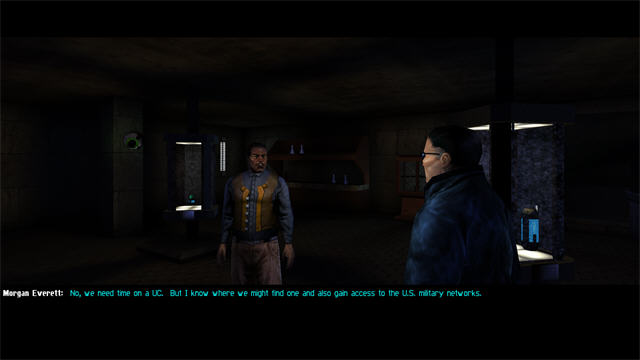 I meet up with Everett. He does seem to have plans to take over but to what ends I don’t know. For now we need to get hold of a constructor. I need to meet up with Gary Savage who is holed out at the Vandenburg air base. He has been busy trying to construct one. While I’m there I also need to do help out Daedalus who is in danger of being destroyed by Icarus. I’ll need to use the main computer in the base to do this. It turns out that Daedalus is an MJ12 AI that rebelled when it classified MJ12 as another terrorist group. It’s not exactly on the same side as the Illuminati but it has the same goals for now. 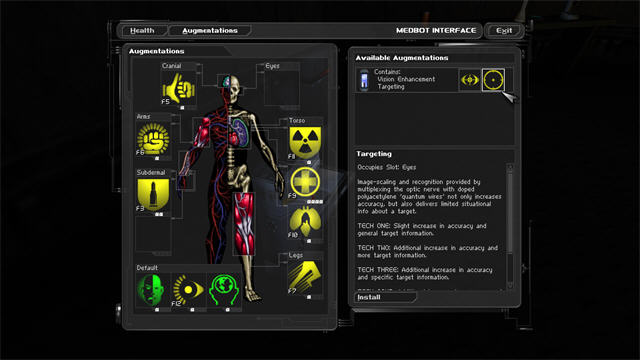 He sends me off to the helipad with a new key but first I raid his room for upgrades including a fancy visual targetting system. 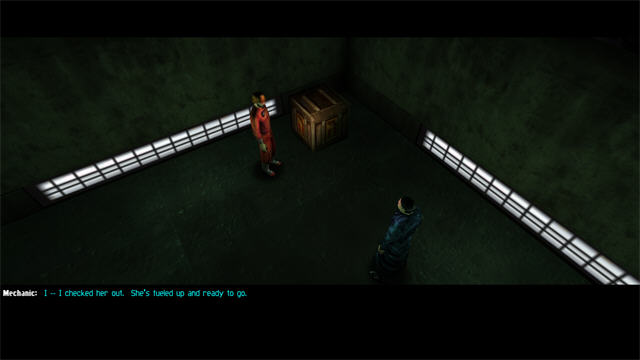 There is clearly something up at the helipad as there is a dead mechanic at my feet the moment I enter and a very nervous but still alive mechanic hiding round the back. I don’t take any chances and chop him down with my sword. I find a stealth pistol on him which isn’t standard equipment I’m sure. 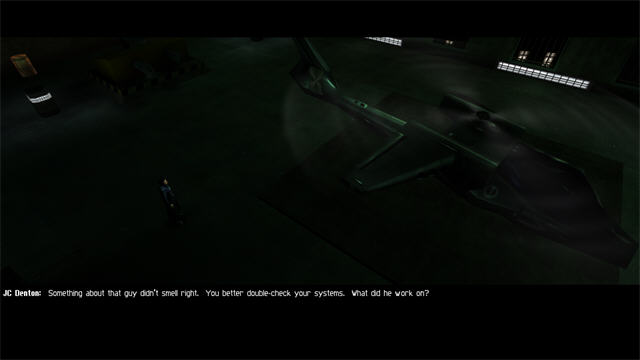 I mention it to Jock and he finds and disarms a bomb on his helicopter before flying me off to the air base. 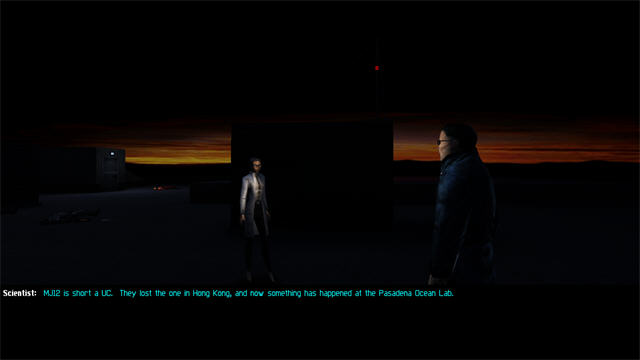 The air base is under siege from MJ12 with snipers and more importantly 4 bots. I won’t be able to get in without destroying these bots. A guy who meets me on the roof suggests that I release the bases own bots by overriding a couple of systems. 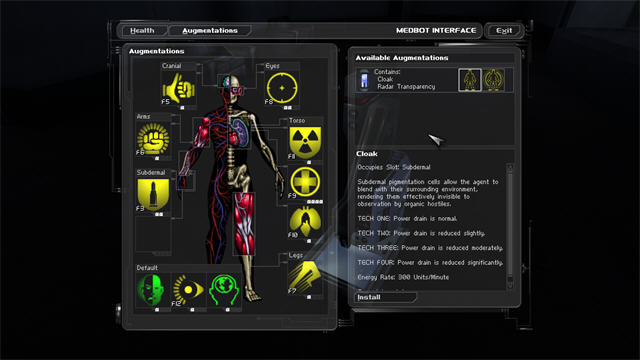 The base is well guarded and sneaking past the defenses is not going to be easy. I do find another upgrade which allows me to cloak myself from bots which will help out later. 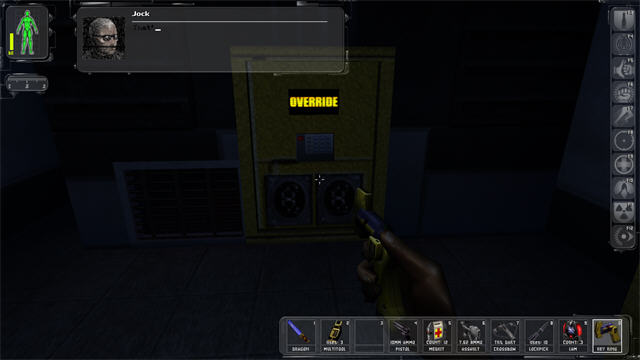 First I need to find the override switches. There are two of these near the entrance to the base. They are easily located but I then need to sneak past all the enemy bots to release the doors and let the good bots out. 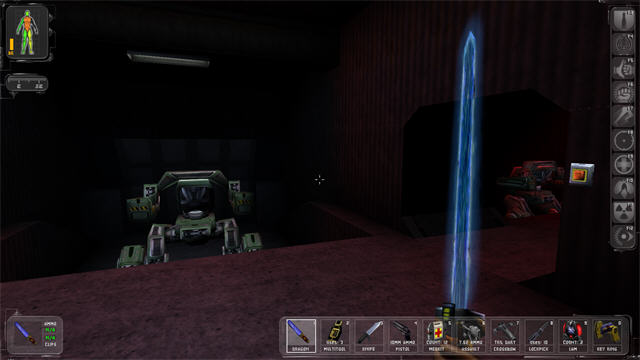 I use some thermoptic camo armor I’ve been carrying around which just about gets me to the building with the bots without been seen. Once here I just press a few buttons, let the bots go and watch the show from a safe distance. 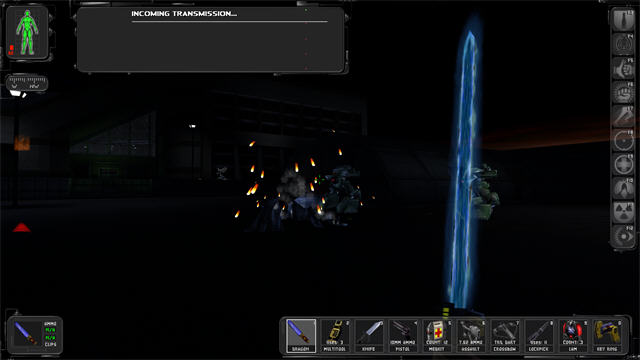 The new bots make short work of the opposition and the base comes out of lockdown, so I can get into the command censtre. 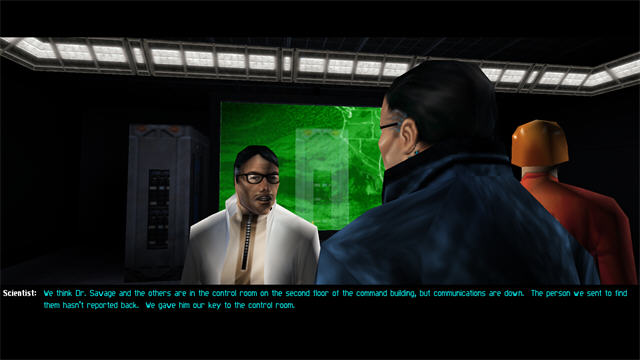 I head straight there and get sent through the maintenance tunnels to try to locate Savage. They already sent someone before me but he vanished. 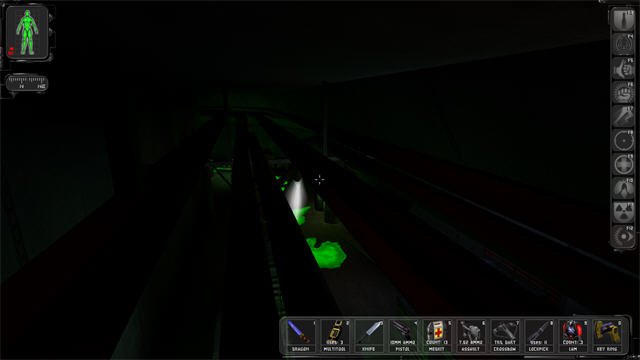 This is a highly radioactive area but I manage to avoid most of it by taking a high route crawling along some pipes. I locate the body of the last guy that was sent this way and take the key he was carrying. 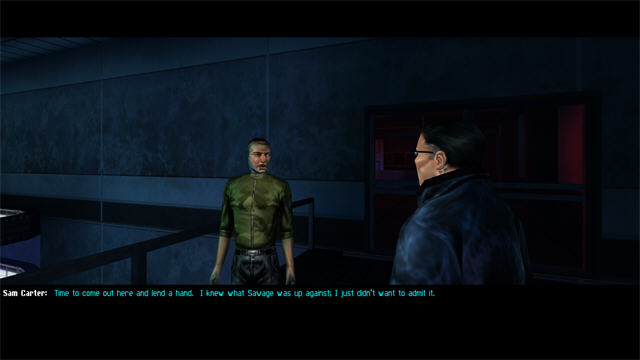 I use my new key in the command building and bump into General Carter who has gone over to our side after all. That makes near enough all of UNATCO then. 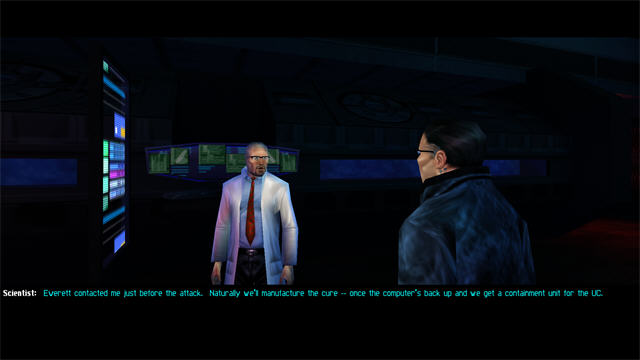 The bloke I really want to see is Dr. Savage. He hasn’t quite managed to complete his UC and needs a containment unit. He has sent his daughter to an ocean lab to pick this up but she hasn’t returned. 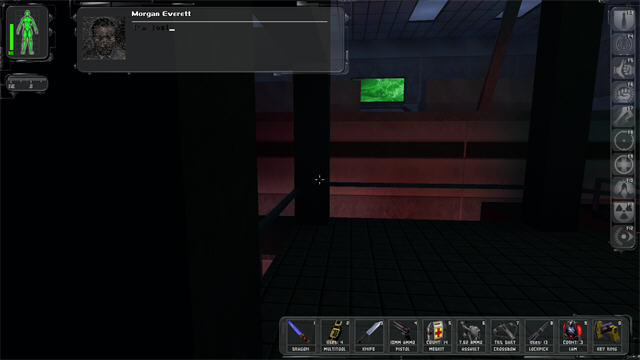 Before we worry about that, I have to upload Daedalus to the systems here. This means going through a heavily electrified room but I just work quickly and take the damage. There is a recharging bot outside so I don’t need to worry about using up all my energy. 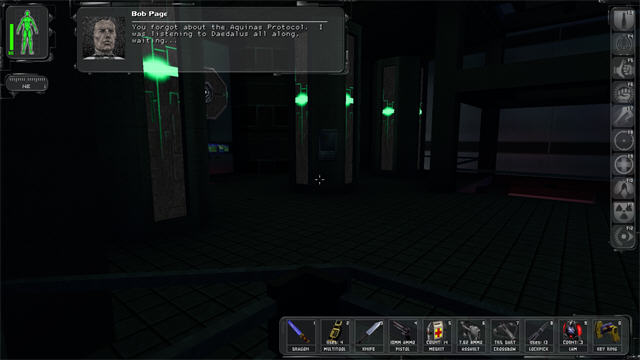 I get to the terminal but Page has a surprise. The 2 AI’s are merged forming a new entity, Helios. God knows whos side this new AI will take. Page seems to be pleased with himself but it won’t necessarily take his side I’m thinking. 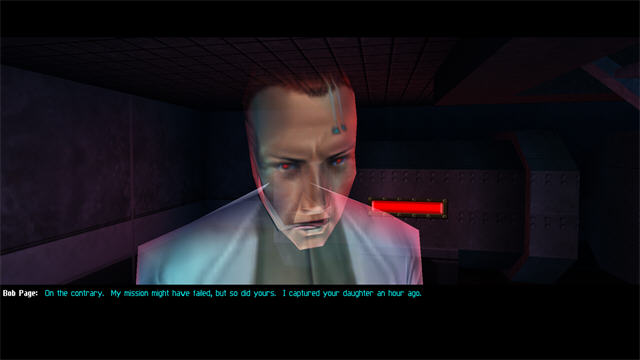 Page also has an announcement he wants to make to the group. He has captured Page’s daughter and demands all his equipment within the hour. We aren’t about to negotitate so I’m going to have to go in and perform a rescure, while getting the containment unit at the same time. 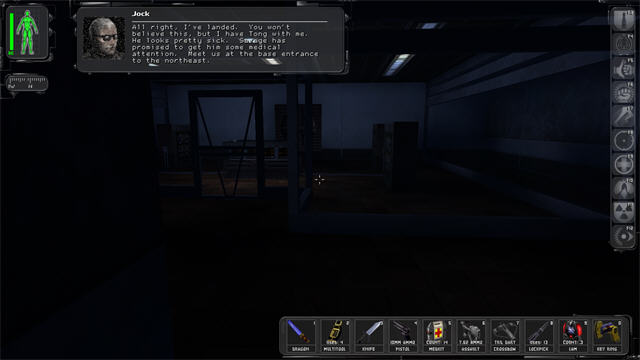 Jock lands at the entrance to the base along with a very sick Tracer Tong who has come along in the hopes of us making a grey death cure in time to use it himself. 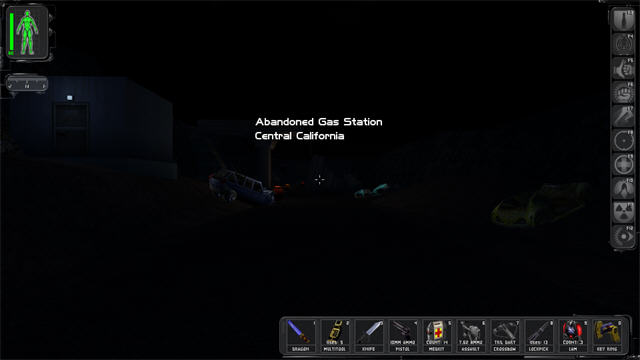 Jock flies me off to an abanoned gas station. I’m guessing this is somewhere near the ocean labs but will find out soon.

I’m clearly getting somewhere near the end of the game now but it doesn’t look like I’ll finish it by the end of the week after all. I’ll get another couple of hours in tonight anyway and see how far that gets me. I know the game has multiple endings and I can see the plot being set up for these with several sides for me to choose from. The plot still hasn’t exactly grabbed my full attention but at least it’s settled down into something a bit more interesting and less laughable than in the early stages and I’m looking forward to seeing how this ends up.

The gameplay has continued in the same form as ever. There are always multiple options for ways to do things and by this stage with the amount of upgrades I guess you can be playing the game any way you want. I’ve been combat heavy with my skills but if I’d wanted to go the sneaking or the hacking routes I’m sure I could still get through the game. Some skills like swimming would be of little use though and would be the equivalent of playing Ultima as a shepherd.