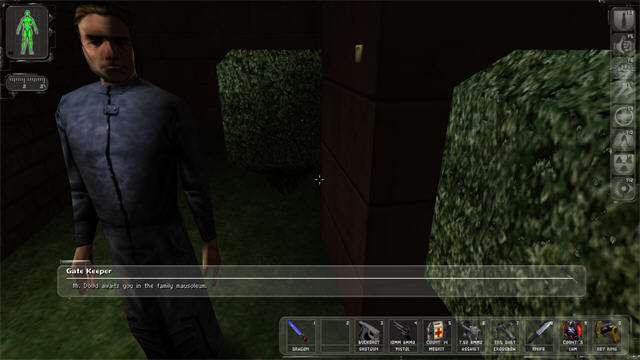 The gatekeeper lets me in to the cemetery and I’m to meet Dowd in his family mausoleum. 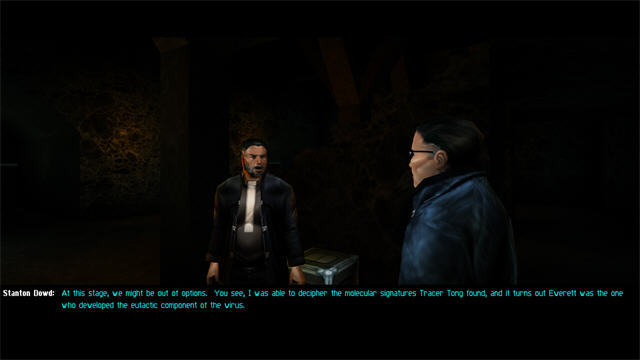 Dowd tells me that looking at the virus schematics I found, he has determined that the virus is based on work done by Everett which was subsequently modified by a guy called Bob Page. Page used to be in the Illuminati but broke off to form MJ12. Everett was the real genius and it should be possible for him to reverse Page’s work to find a cure. I need to speak to this Duclare in Paris next to find Everett. She is a member of the French resistance group silhouette who are hiding out in the Paris catacombs. 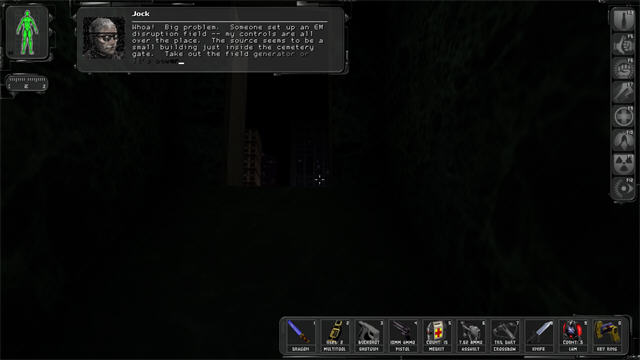 When I leave the crypt a load of troops have appeared and I also have to take out a field generator which is interfering with Jocks helicopter. I draw the troops into the crypt where I can get them at close range and use the sword on them. 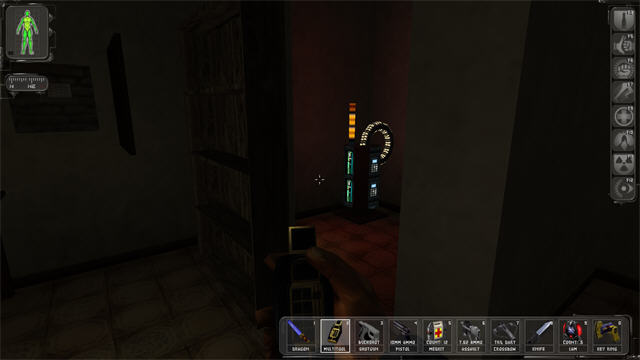 The gatekeeper also attacks me but is no problem. I find the energy generator hidden behind a bookcase door in his little guard building. I chuck in a LAM then Jock flies in to pick me up. 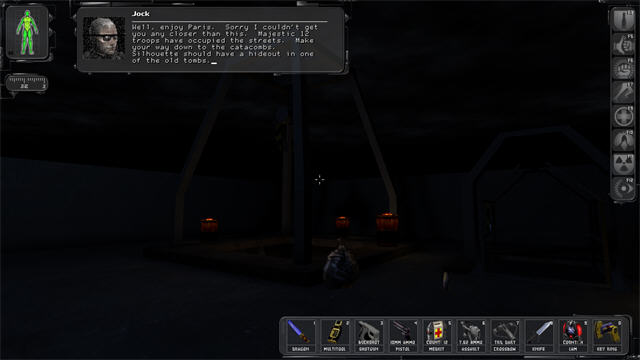 Jock drops me off on the roof of an abandoned building in Paris. I have to make my way down to the streets of Paris by jumping down an elevator shaft and attempting to break my fall with sticking out beams and the like on the way down. 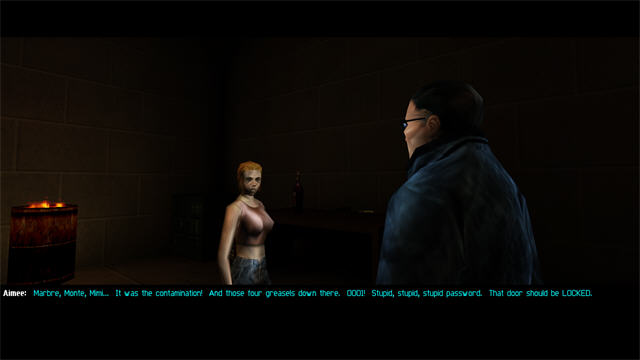 I run into a strange woman who collects cats by the looks of it. She wants me to kill off four greasels (whatever they are) and gives me an access code. 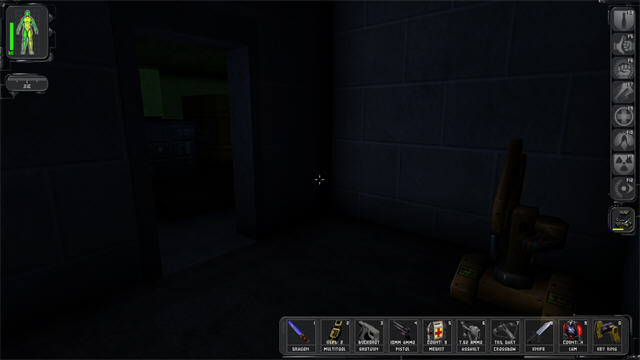 The code gets me into a seriously radioactive room. Even with the hazmat suit I picked up on the other side it nearly kills me off going through it. There is a bot on the other side which I use to recharge so I’m good as new for the next section. 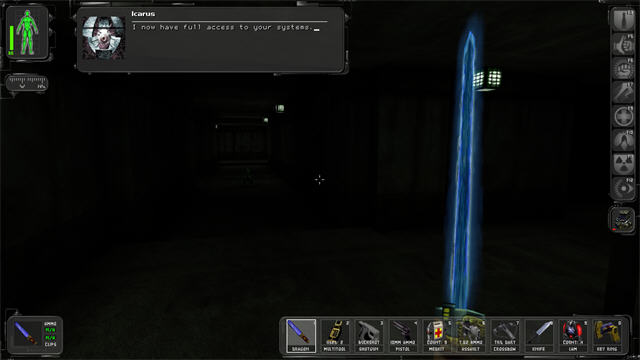 The greasels which are strange little green things attack on sight in the next area. I take them out with no problems at all. Of more interest is someone called Icarus who tells me he now has full access to my systems and then proceeds to offer me discouraging advice throughout the rest of the days play. He’s a bit of a Shodan type figure it seems and an opposite to Daedalus. I’m expecting them both to be AI’s but could be way off. I can’t help but notice that Daedalus is the root node for all the terminals I log onto though which is a bit of a clue. 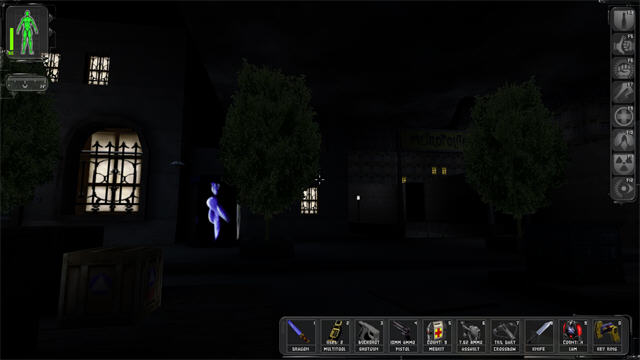 After crawling through the Greasel’s tunnels I emerge onto the streets of Paris. 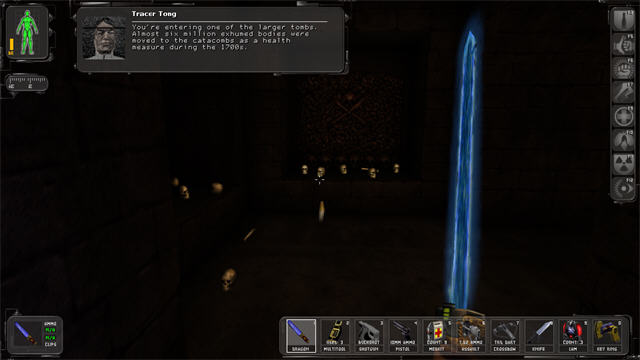 I find the catacombs very quickly. Tong turns into some sort of tour guide at this point and tells me the history of the catacombs as I wander about trying to find Silhouette. 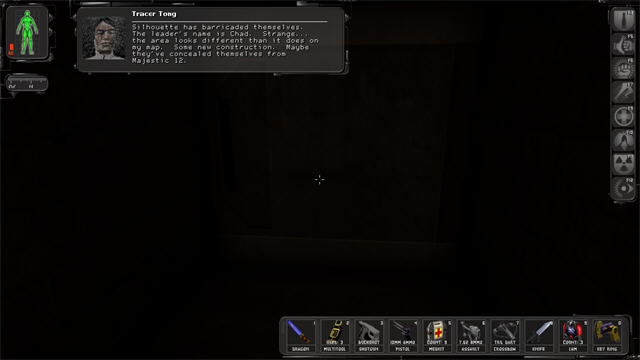 Tong informs me that they have barricaded themselves in to keep out MJ12 but when I get there the front door is wide open. 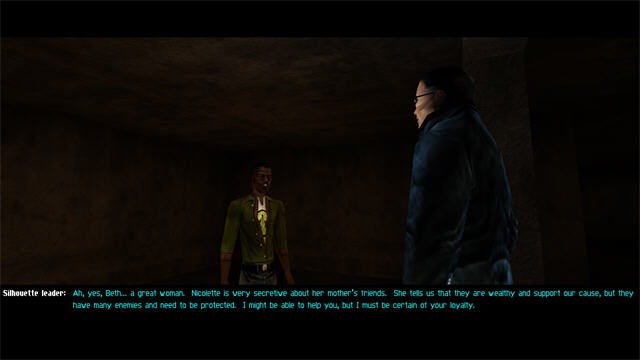 I speak to the leader who could help me but I have to help him out first. Some of the group members have been captured and he wants me to go and rescue them, wiping out a troop of MJ12 troops in the process. He is helpful enough to give me a map so I head off straight to the MJ12 HQ in another of the old WW2 bunkers. 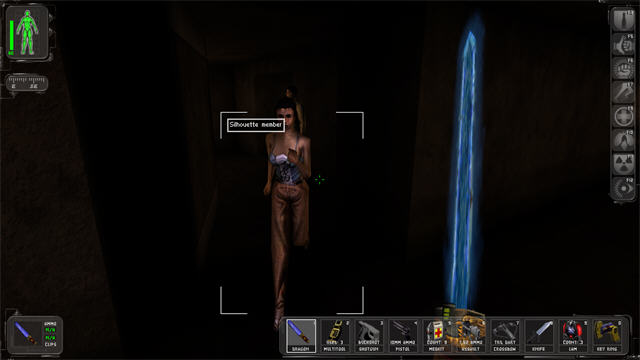 The place is well guarded but my sword does the job as ever and I free the hostages who then run back to base. 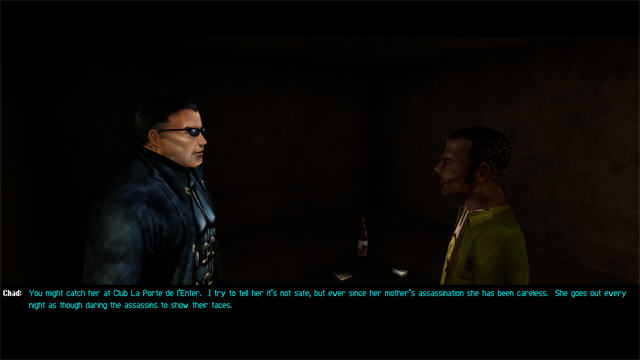 The group leader is true to his word and suggests I go to the local nightclub to find Duclare. I have to go through the sewers to get there which connect to the catacombs. 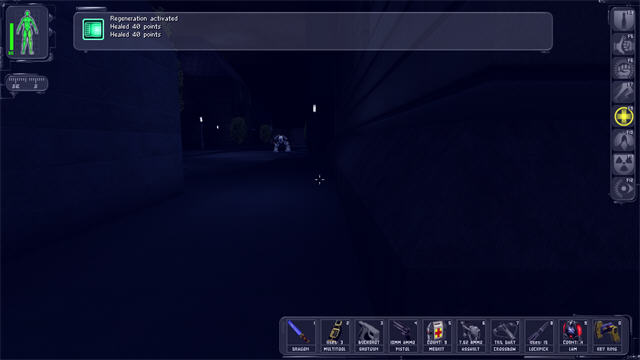 It’s a quick trip through the sewers then I pick the lock of a grate and get back to the streets which are far more dangerous. Paris is under martial law and MJ12 troops are everywhere as well as some enormous bots. I’m reduced to sneaking around to start with but I find a computer which I hack into to deactivate the bots. 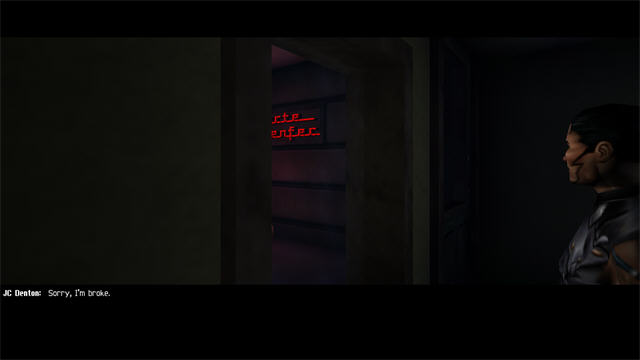 With the bots out of the way, I find the club quickly enough but I need 300 credits to enter and I’ve got nothing. This leaves me searching around Paris for cash. 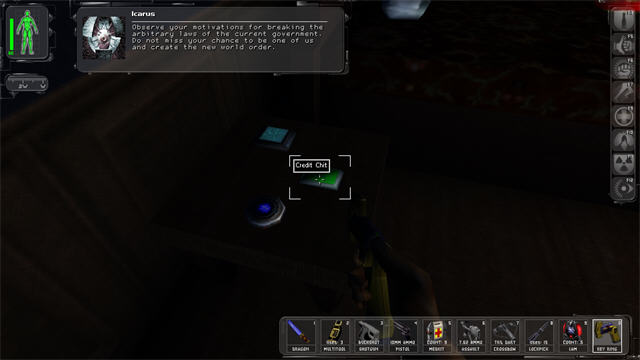 There are a load of shops, hostels and the like which I can break and enter, or I can hack the bank terminals. There is an impressive amount of unnecessary detail with all these buildings which I’d potentially have missed altogether if I’d had the money on me. I pillage a few of them until I have the 300. 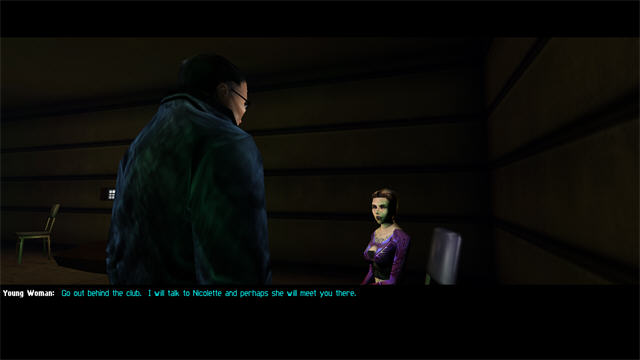 The club is huge but I ask everyone I see and eventually a woman who is blatantly Nicolette Duclare and not admitting it says she will talk to her “friend” and perhaps arrange a meeting outside. 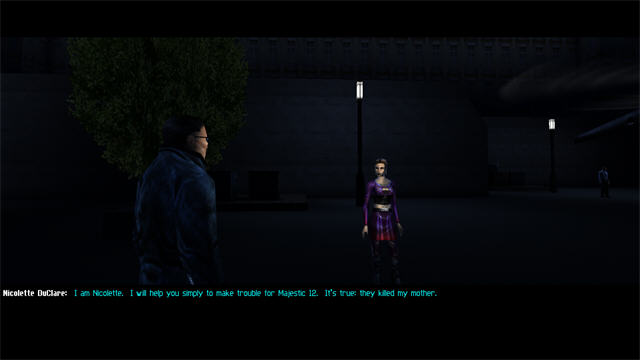 She admits who she is when we meet up and tells me that we need to go to her dead mother’s chateau and search for her secret lab if we are going to contact Everett. She also says that Everett is the one person Page fears. 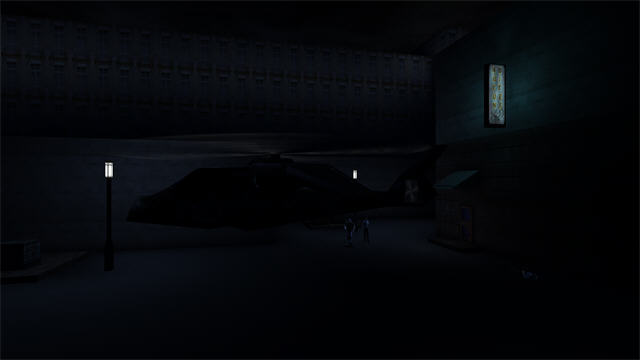 Jock flies us off and someone who looks very much like Gunther runs in below afterwards. Maybe I’ll be seeing more of him later.

Tong continues to act as tour guide while we search the old house for clues. This is a different sort of level with no combat to worry about. It’s just about exploring and finding keys. 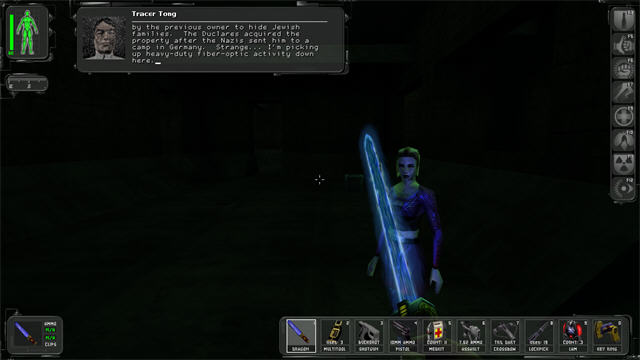 A bit of searching and I find a few messages from Nicolette’s mother giving passcodes and the like and a key to the cellar where there is a secret area used to hide Jew’s during the war. 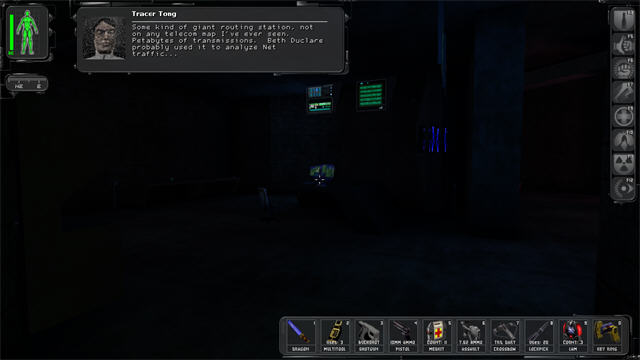 This is clearly the spot and the computer in here has a very useful “Contact Everett” button which I press. 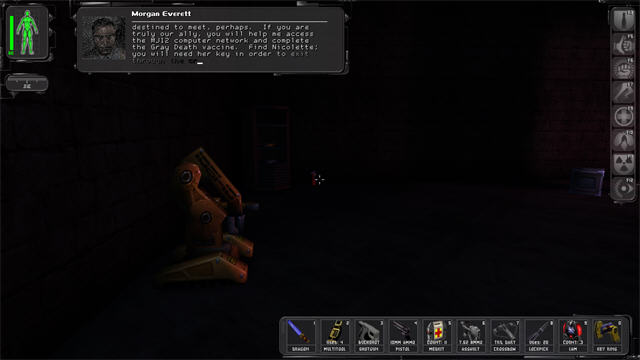 Everett immediately appears over my communications systems and wants me to help him out by hacking into MJ12’s systems so he can complete his cure. He sends me out through the crypt at the back of the house into a cathedral. 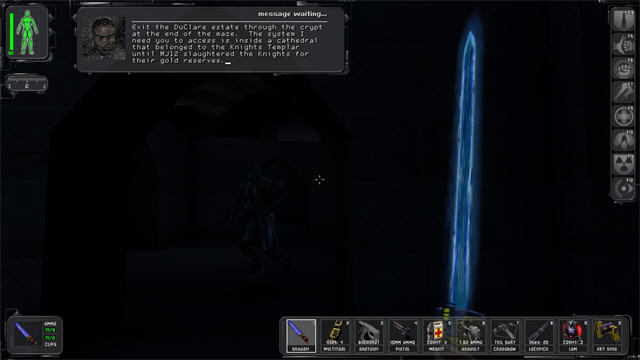 The cathedral belonged to the Knights Templar until they were slaughtered by MJ12 for their gold reserves. I might have known the Knights Templar would make an appearance as they seemed to be in a load of games around this time. Exploring their cathedral looking for the info Everett wants will be tomorrows first task.

I’ve made some real progress today and I can’t help but notice that I’m collecting skill points a lot faster than previously suggesting that I’m closing in on the end game. I expect I’ve got 2 or 3 days worth left yet though. The levels have been getting bigger and less restrictive the further I’ve gone in this game. It’s so much less restrictive than New York that it feels almost as though those levels were put together when Ion Storm was still figuring out the engine. It’s definitely a game that improves as you play it so it’s worth pushing on past the first few levels which I may not have done if I wasn’t blogging it.