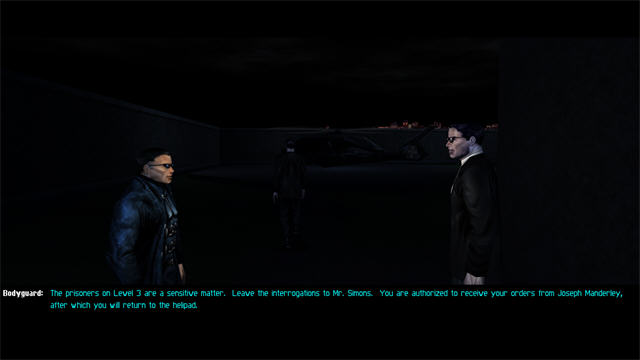 It’s back to base again for another debriefing. I’m told on the way in that my brothers half of the mission didn’t work out so well. I also meet some sinister government agent types who warn me to stay away from a guy called Walter Simons who is one of the guys I saw back in the intro. These guys are pure stereotypes and are clearly here to make me distrust my own government. 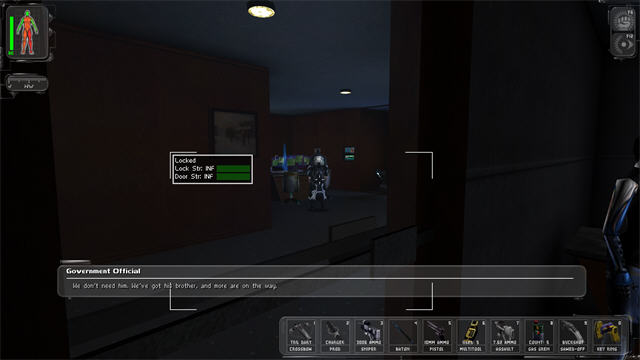 When I get to Manderly’s office I overhear him talking to Simons. Simons wants to dispose of Paul but Manderly disagrees. I get the impression Simons is the one holding the reins though. I get debriefed after he has finished and Manderly confirms that they are letting my brother go. I’m going to be sent out again to tidy up and attempt to recover the Ambrosia. 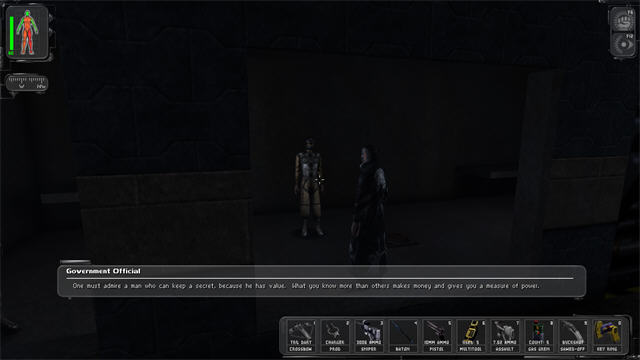 I explore the rest of the base again before I go. Everyone has something new to say and I also find Simons interrogating prisoners. His tactics involve threatening the prisoners family. He doesn’t take kindly to me noticing him here and I’m told to go. 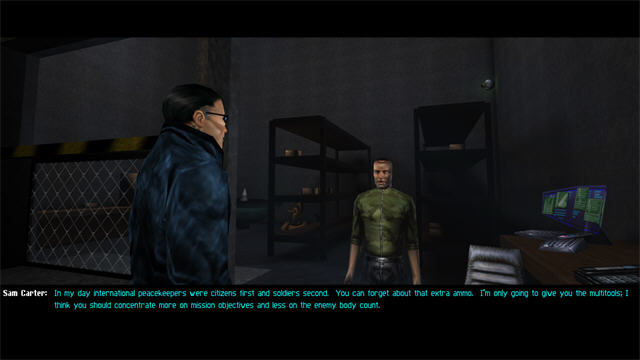 I go to pick up more ammo also but the General isn’t too pleased with the bodycount on my last mission and refuses to give me anything except an accuracy mod + a multitool. 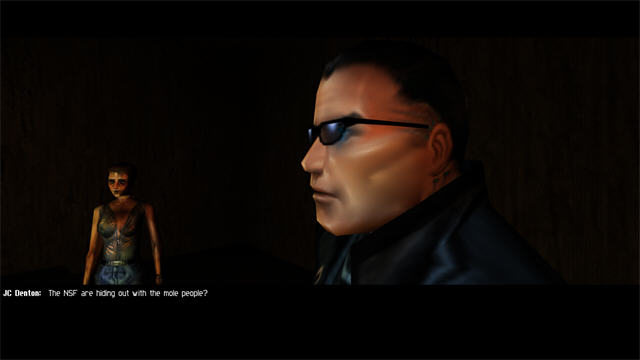 I’m dropped back in Battery Park once again. I ask around and find out that a group called the Mole People live underground in the area and the NSF are using their tunnels as a hideout. Getting into the tunnels isn’t as easy as the bum wants the NSF password before he will tell me the access code. My contact from the last mission is down in the subway and he gives me this password for a fee and this in turn gets me a phone number which when dialed on the subway phone turns it into a lift down to the tunnels. 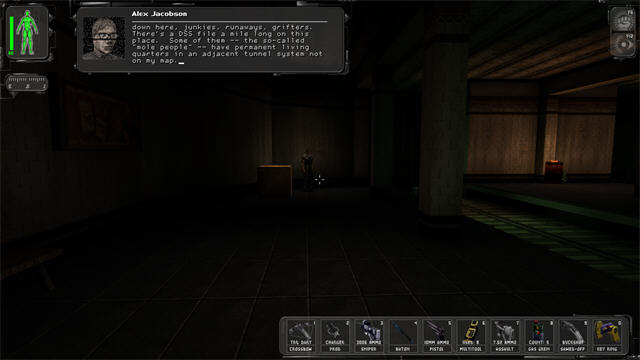 The lift only gets me into the old subway and I’ve still got to find the mole people. This place is full of dealers. I find a zyme dealer (whatever that is) but he doesn’t take kindly to me asking questions and I end up shooting him. 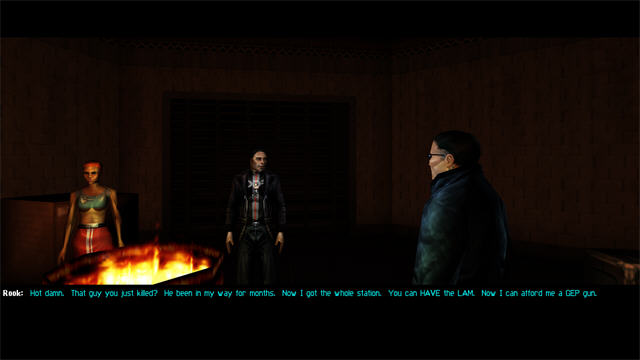 On the bright side, this fulfils a subquest before I’ve even got it and I get a free LAM (a type of sticky grenade) from an arms dealer upstairs when I run into him for taking out his competition. 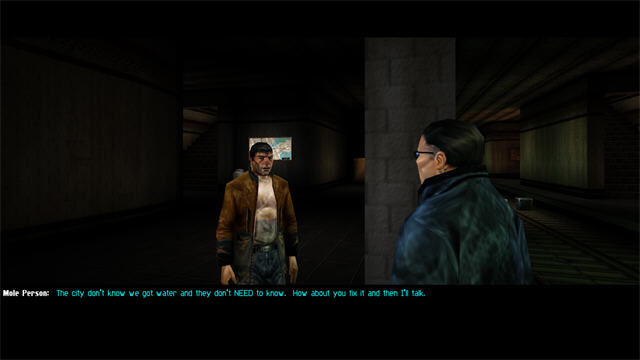 This hasn’t gotten me any closer to finding the mole people so I keep searching around and find a guy who will help me if I can fix the water supply down here. Conveniently this requires use of the LAM I just got to blow up some rubble and get to the valves. 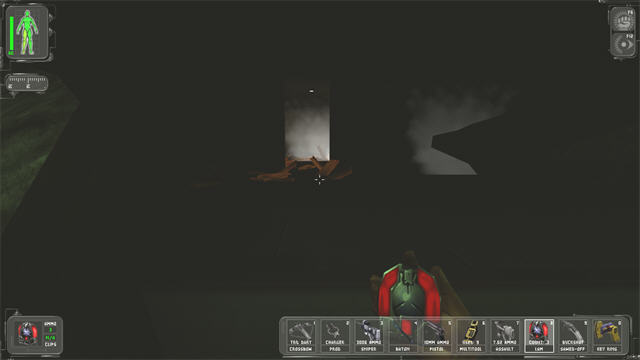 This mission takes about a minute as it’s just nearby. I’m rewarded with another keycode that I need to use on a pad in the womens restroom. 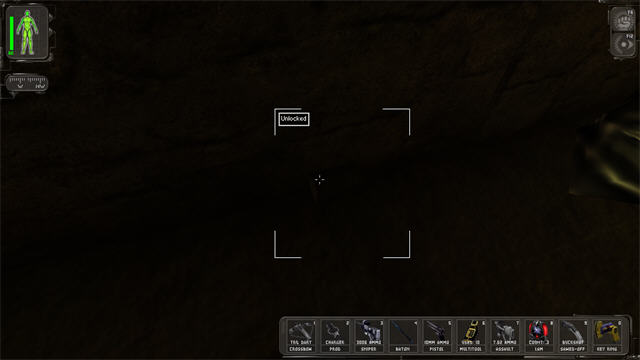 This gets me into the tunnels I was looking for. There are a load of NSF around. I take the lot of them out. There really is no reason at all why you would want to sneak around. With the ridiculously slow targeting my strategy is just to run straight at anyone I see and shoot them at point blank range and it works very well.

I’m at a bit of a loss for a while until I notice a brick sticking out from the wall. The terrorist leader is behind here and he instantly surrenders and gives me the key to the mens restroom which is apparently where I need to go next. 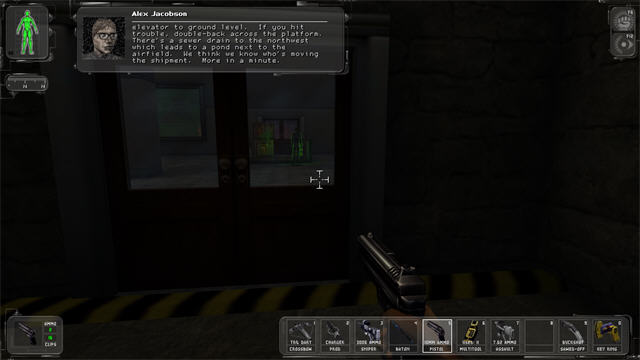 I make my way through some sewage tunnels, grab an elevator and this brings me up near an airport and straight to my first barrel of Ambrosia. There are loads of guards here again but as usual they are more interested in running for the alarms than shooting back and I just shoot them in the back in the meanwhile. If they set off the alarm it’s no big deal as I just take out anyone who shows up. 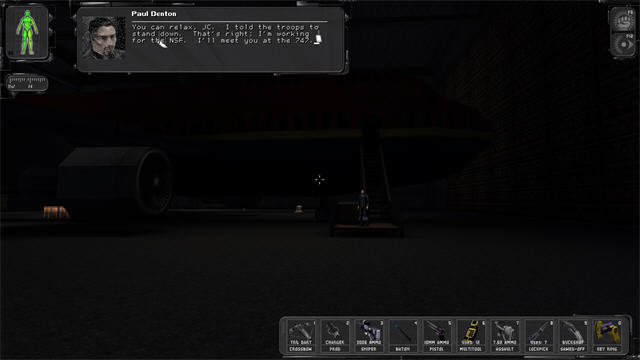 The airport is more of a challenge as there are a load of bots around who appear to be impervious to gunfire. I have to sneak/run past them but they have a very limited range of vision. I find another barrel of Ambrosia in the docks before heading into the hangar itself and finding of all people my brother Paul. 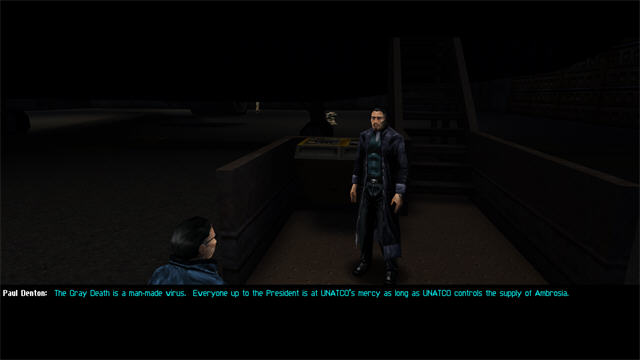 He has gone over to the NSF. He tells me that the grey death is a manmade virus being used to control the population and government right up to the president. He wants to take the Ambrosia to Hong Kong so that a guy called Tracer Tong can synthesise the cure and get it to the general population. He also tells me to talk to Lebedev who is in the plane – my mission is actually to kill him. 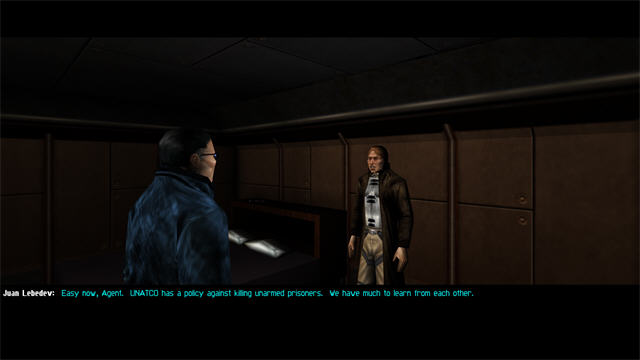 Lebedev doesn’t actually have much to say to me other than the fact that he is unarmed and I shouldn’t kill him according to UNATCO policy. Anna shows up at this point and orders me to kill him. This is an obvious moral dilemma, Anna will kill him if I don’t though so I just shoot him anyway as it will be less grief for me. 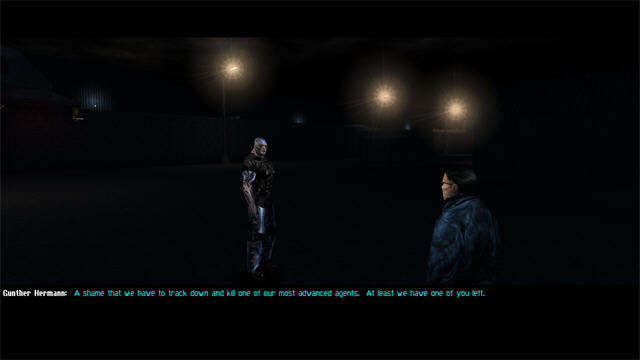 That finishes the mission in effect although I do find a code to get a new upgrade module in the base of the plane. I head back to the extraction chopper and find that we are going to be going after my brother. I expect I’m going to be given the job after my performance here but I leave it here for tonight.

This was a much more substantial mission than anything else I’ve played through and there were a load of sub-levels in it. The sub-levels were no bigger but the number of them did make it a bit more interesting. The much vaunted multiple solutions aspect to everything isn’t impressing me. It’s always so forced and obvious. One of the things I like about Underworld is the fact that there are often many ways to do the same thing but it never feels like this has been designed into the game. It’s just that the games engine allowed you to be creative. The alternative paths here are blatant, right down to branching corridors with an environmental hazard on one side and an electronic security grid on the other.

The plot itself is advancing slowly and predictably. I have to say that the acting for me and my brother is just a joke. Maybe we are supposed to be cold and unemotional but it’s all so deadpan it’s almost funny. The moral choices are equally silly as I can’t care enough about these cardboard characters to worry about them.

I’m still enjoying Deus Ex but it’s such a let down after all the hype. It holds up well against it’s contemporaries like Half Life and Unreal but this is no System Shock or Thief. It just feels very simplistic and in all honesty a bit childish. This is clearly going to be another of those games (much like Half Life) where I just can’t see what all the fuss was about.

Not a very positive note to end on then for my Christmas eve post but I’ll keep going. I’ve been known to change my mind 3/4 of a way through a game before now. Not sure how much I’ll be playing over Xmas although I expect I’ll get the odd hour in here and there. Happy Christmas to any readers and I’ll be back by Tuesday at the latest.