Before I started playing today I dug out the manuals for this game to see if there is much backstory I’ve been missing. Steam appears to be a dead loss for this but I find the 2 manuals on replacementdocs without any problems. They offer a bit of general background but nothing too major. The manual is all about instructions on playing the game, which I’ve already figured out for myself. The newspaper does have some interesting bits and pieces and I always like it when games give fake newspapers or magazines in the box as it all adds to the atmosphere. I remember Alone in the Dark for instance having the deceased painters final mail wrapped in a tag with his name/address and deceased stamped on it. AITD’s paper manages to set all the backstory for the game in an interesting way. This doesn’t succeed quite so well as it doesn’t really tell me much I don’t know by now but it would have helped at the start. 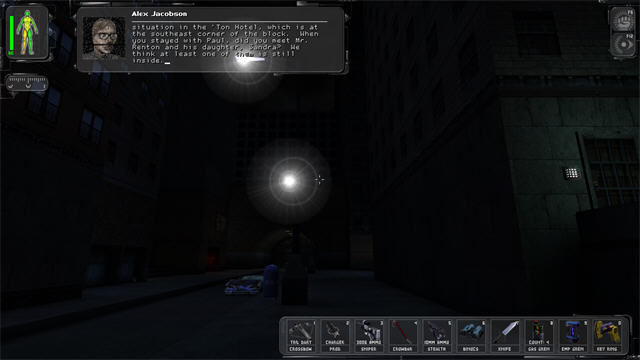 The moment I walk into Hell’s kitchen I get a message that there is a hostage situation at the Ton hotel where I stayed with my brother apparently. I’m asked if I remember Mr Renton and funnily enough I don’t but apparently I should do. 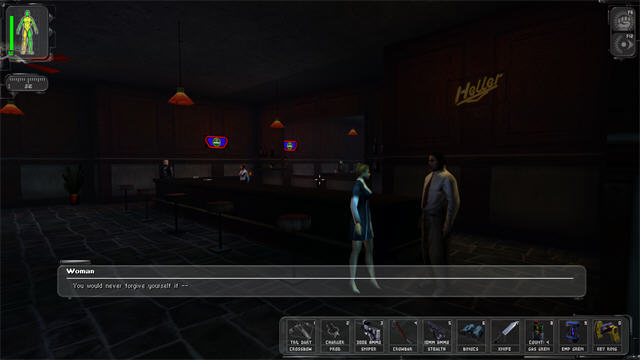 I don’t really know where I’m going but I end up in the bar. It’s a large bar but it’s not exactly full of people. I can go up and talk to every single person in here which makes up for this to some extent. I get a lead on a warehouse to the South for my NSF generator. I also get a side quest to go and find a woman who has gone off to an alley somewhere and not returned. The side quests are mounting up now for this area. I’m being sent off to do other peoples little tasks so this really is starting to feel like an RPG. 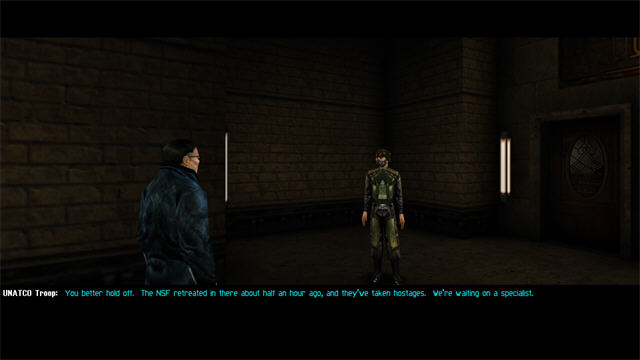 I attempt to find the alley and instead find the hotel so I decide to get this sub mission out of the way first. 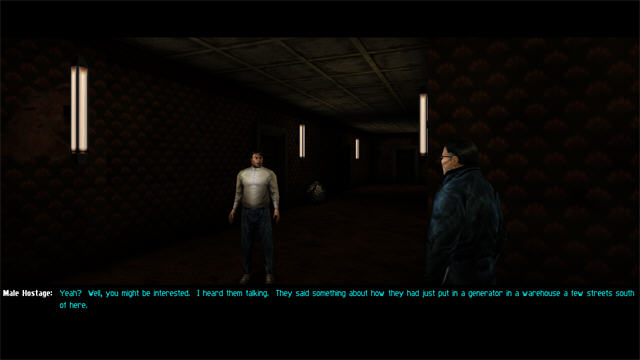 There are two hostages being held on the first floor with a terrorist guarding each. It takes me a few attempts to rescue both as the terrorists tend to kill them off the moment I attack the other one. Sneaking doesn’t seem to help and I do better just running straight in. I’ve very much given in on the non-violent approach by this point. It’s not much use sneaking around in this game and it worked better in Thief. The rewards for sneaking are non-existent also as far as I can tell. I’m sure its all avoidable but if there’s no particular reason not to, I’ll use the quickest option I can see which is more often than not the violent one.

I’ve not talked about the combat system yet. It’s an unusual hybrid of RPG and FPS. You have the usual array of weapons including machine guns, pistols, crowbars, knives, grenades, etc.. but you also have a skill for each one which affects how much damage you do and how accurate you are. The accuracy is strange in itself, in that you have crosshairs that show the area your bullet will go in which shrink gradually as you stand still. When I say gradually, I really mean it. To get any degree of accuracy I have to stand still for about 5 seconds. Fortunately the enemy always appear to run straight for me (after struggling to get around corners) so the best strategy is usually to get their attention, back off and wait, then get them when they come round the corner.

Aside from my own stats, the weapons themselves have more stats which I can sometimes alter by modding them with scopes, laser sights, etc.. They don’t appear to break down and need repairing (thankfully).

I use my knife on these two NSF guards as I’ve been training up my melee a bit. As far as training goes, I receive skill points for certain actions in the game (usually going to key locations). I also get the occasional bonus points for exploring but these have been trivial so far. I can use these points at any time to train in the same skills that I had at the start of the game. I’m assuming that if I get my pistol skill up to maximum I won’t have to wait forever for my crosshairs to shrink down but I’ll need a lot more points before I find out. I’ll use the strategy of maxing out a couple of my combat areas (probably small arms and melee) on the basis that I’ll be better off being a master in a couple of areas than a jack of all trades.

One of the freed hostages gives me a password for the NSF warehouse although I don’t remember ever using it. I talk to the hotels owner and he tells me his daughter hasn’t come home and he wants me to find her for him. 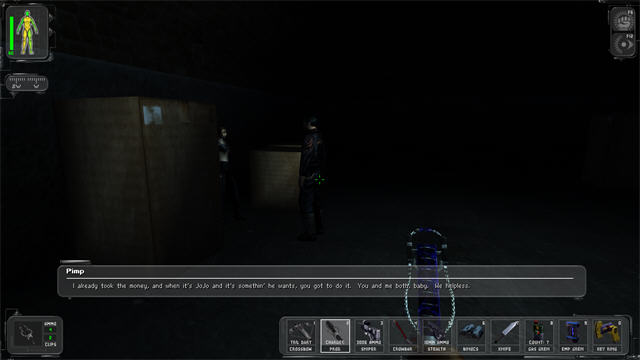 His daughter is the same girl who I heard about in the bar. I find her + a pimp in an alley. The pimp has her cornered and is trying to force her to work for him but I sneak up and zap him with my stun baton. 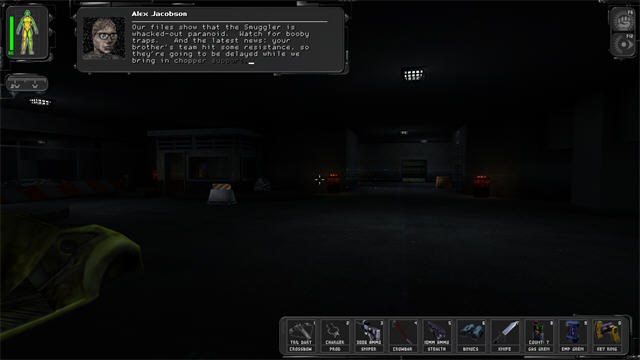 She gives me the password to get to talk to a weapons dealer who lives in a nearby basement. I head here next. There is an EMP field to get past which I do by hacking his systems with a multitool. This leads me to yet another mini-quest where I have to go and rescue his buddy from a base in the sewers of all places. 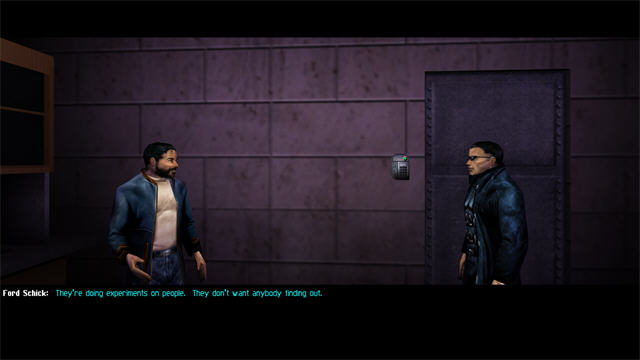 I soon find the sewer labs although I have to shoot my way through a load of guards and swim through toxic waste to get there. The smugglers buddy tells me they have been experimenting on people and forcing him to do anti-body work. When I return to tell the smuggler, he claims the CIA runs the lab but I’m sceptical. This is more suggestion of a corrupt government and I’m clearly on the wrong side here given the way the government is being portrayed and the fact that everyone on my side is a bloodthirsty goon. I expect I’ll be swapping over to the NSF or an equivalent at some point.

I run out of subquests and get to go for the main mission. I picked up a key to the warehouse from one of my quests a while back so I head straight in and after a bit of running around the rooftops and down alleys this leads me to the building I’m looking for. There are a lot of NSF in here and dealing with them all presents a bit of a challenge.

Once again I use the fact that they always come running for me against them, trapping 7 or 8 of them in a small spot, tossing in a gas grenade then picking them off at my leisure. I’m not too impressed by the AI for these guys, it’s not much different to playing Doom and it’s not the games strong point. 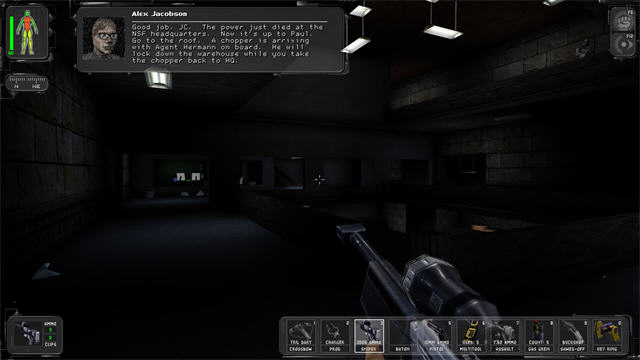 I take out the generator by shooting a conveniently placed exploding barrel. I’m sent to a chopper which is waiting for me on the roof so I make my way up past a load more NSF. 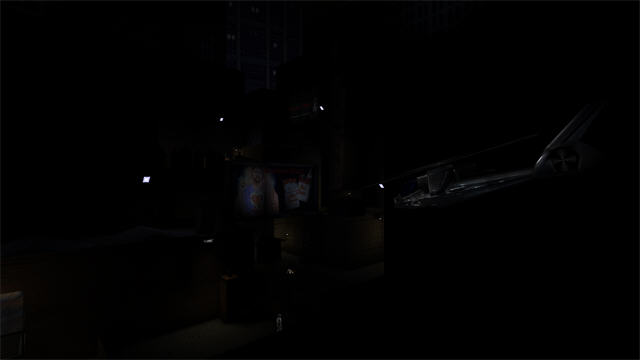 Gunther is waiting up here with the chopper. He hints that my brother hasn’t been doing too good a job with the other part of the mission but I’m not sure if he is just complaining about his lack of violence again or if something has gone wrong. I fly off back to base. The poster in the background with the word “Savioriffic” on it doesn’t half look like Richard Garriott incidentally but it’s not too clear in this screenshot.

I expect I’ve got a much better feel for what Deus Ex is about today. I’ve enjoyed playing this but the levels just feel too small for the system of subquests to work well. There is no room for wasted space and while this keeps things fast paced, the quests all end up being on top of each other and there is no feeling of realism or any real role playing. It would be easy to say that the technology didn’t allow for more but Underworld managed on a much more basic machine years earlier. I think its yet another example of higher spec machines restraining gameplay. The Unreal engine was probably a good choice rather than starting from scratch but the constraints it has imposed are very obvious.

The game is a strange mixture of Ultima style questing, System Shock style FPS/RPG with a bit of Thief’s sneaking + a sci-fi comic book story. On paper, this should be fantastic but it hasn’t quite managed to pull any of those elements off. It’s not far away and I can see why it got the hype it did but I think it’s possibly aged a bit less well than a game like System Shock. I get the impression my opinion might be somewhat based on the way I like to play the game since I’m playing this as a FPS. If I was taking a less violent route there would be less comparison to a modern FPS and it would maybe hold up better.

I’m sure I’ve still got a long way to go anyway and the best may still be to come. Hopefully the engine is capable of some bigger levels as this is a clear limitation so far.