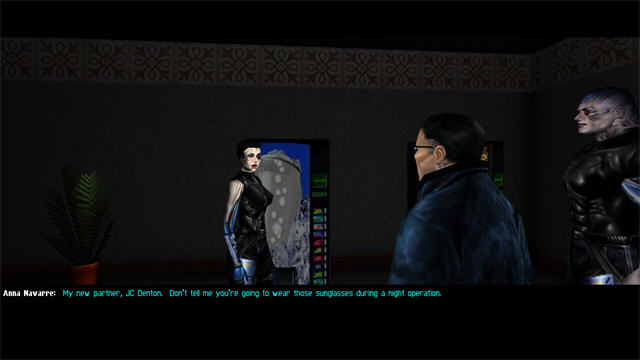 My first task is to meet up with my boss (Manderly) but I take the opportunity to explore the UNATCO base first. This part of the game is just about adding to the games plot and meeting a few of the other people who work at UNATCO. I have my own office here and can log onto my machine to check my email. The emails hint of people resnting the new nano-tech agents like myself as they have sacrificed their own limbs and appearance with the old technological enhancements.

I meet my partner for my next assignment (Anna Navarre). She is the usual ridiculously endowed, leather clad type with a Eastern European accent that I’ve seen in far too many games. She isn’t too unhappy to have me as a partner given my performance on the last mission and the fact that I wasn’t afraid to kill. 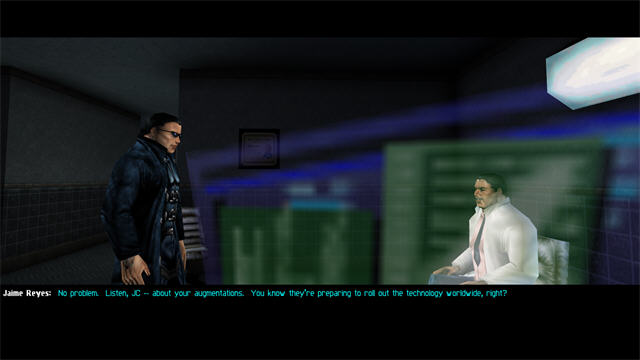 I meet up up Manderly in a nearby office. He is also happy with my performance and sends me for a health checkup and to get armed for the next mission. The medic gives me instructions on using augmentation cansisters (I found one at the end of the mission) with medical bot’s to upgrade my systems. 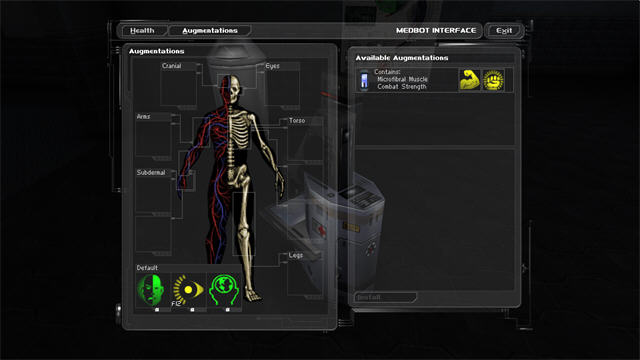 I basically have two options with the upgrade. I can either give myself a strength boost or a combat melee damage boost. The combat damage has to be the most useful as I’m not intending to take the pacifist’s route through this game. I only get these boosts by activating the system which will drain energy. 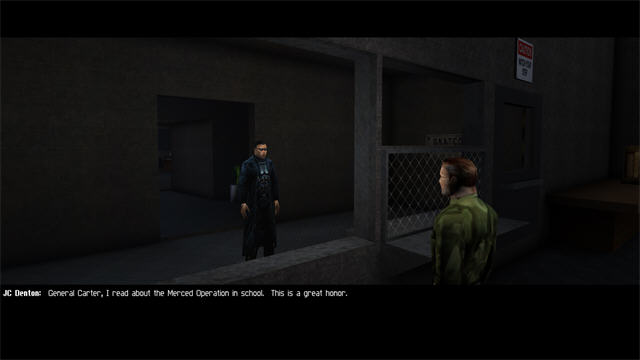 I pick up a stealth pistol from ex-General Carter who is apprently something of a hero of mine. It appears that I definitely haven’t been grown in a tank as he mentions my parents being killed in a car crash. 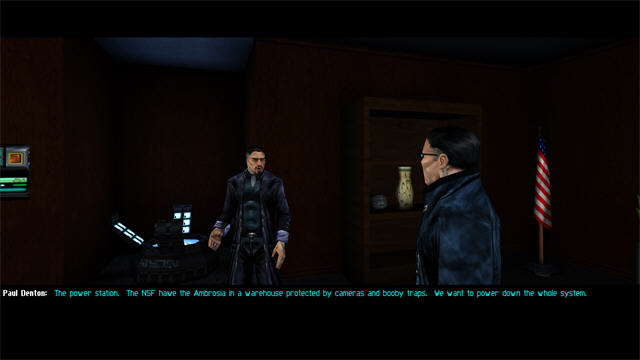 I run out of places to explore so I head back up to Manderly’s office to get my assignment. We are chasing after the stolen Ambrosia and now know where some of it is. Pauls team is going to be sent after it but I have to kill the power generator and shut down the defences before he can go in. 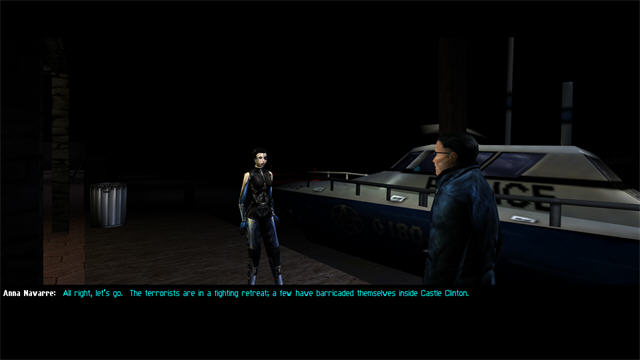 I take a police boat to Castle Clinton where I’m told by Anna that there is a single barrel of the Ambrosia which I have to head in and recover. 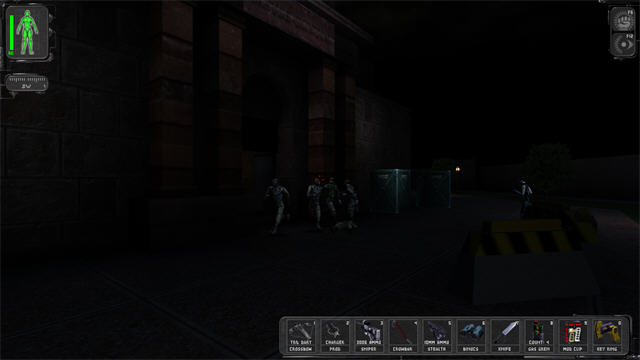 I decide I’ve had enough of the sneaking style and make a frontal assault on the terrorists holding up in the castle. I’ve got backup from my partner + a couple of cops so I just nudge myself far enough into the entrance to attract some attention, back out while the NSF guys run out of cover and let everyone else handle the fight.

A quick bloodbath later and the place its cleared. I get to pick up all the ammo off all the corspes and this approach seems to have paid off for me. There is a locked hatch in the castle which I struggle to find a way to open. There is a child in here who wants some food but I can’t find any to give him. Next to him is a locked container which I open with a couple of lockpicks and this gives me the keycode to enter the hatch (666). 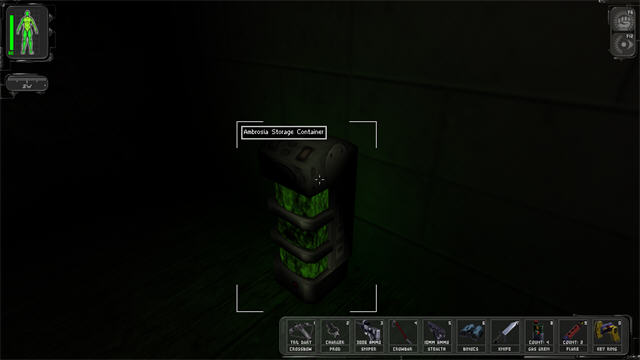 The Ambrosia is just down here. There are also a load of NSF. I sneak past them through the vents do a bit of exploring, discovering an alterative entrance by the vending machine on the docks which would no doubt have been a less bloodthirsty route to go down. 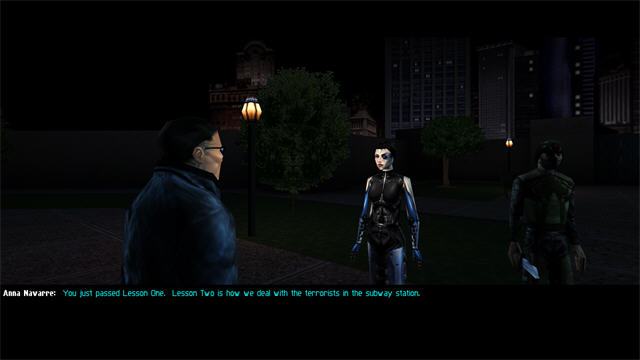 I head back out to meet up with Anna. Despite being my partner she has just sat at the entrance for the whole time. She is pleased with my performance and the fact that I’m not afraid to kill. This violence/pacifist stuff is feeling a bit forced. I can’t see a particular reason why we would be overly restrained in this situation given that the NSF aren’t worrying about keeping us alive. Whether I’m on the right side is debatable but both sides are using the same levels of violence as far I can see. Our agents are ludicrously bloodthirsty on the other hand.

The next mission is to rescue some civilian hostages from the train station. The station is mined so I have to use an emp grenade to disrupt the ignition switches on the bombs. 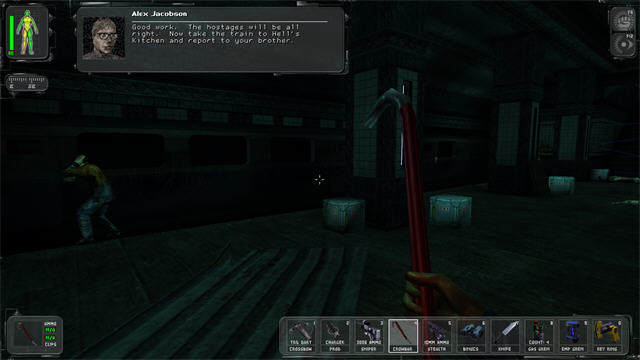 The train station is well guarded with a barracade and three gunmen. It’s not much of a barracade as it must be all of 30cm high. I gun my way through, emp the bombs and rescue the hostages without losing any of them to the NSF. 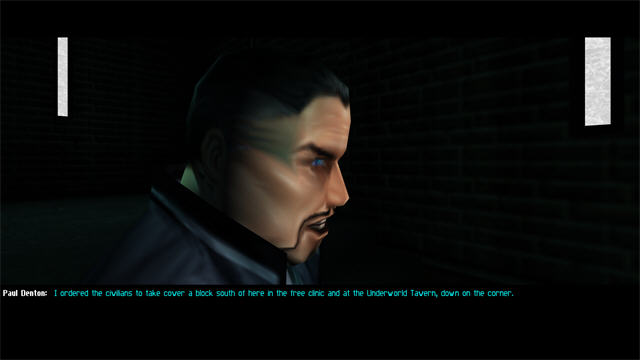 I take the train out of the station and meet up with Paul for the next stage of the mission which is taking down the power station. He gives me his apartment key if I want to go there and get some equipment. It sounds like we don’t know where this power station is and I have to find it. He suggests a couple of places to ask and suggests I start with the local tavern.

I’ve got into this game a bit more today. The plot is starting to flesh out and walking around the base talking to everyone really helped. This is still a comic book world in every sense but at least it is a detailed one. A lot of effort seems to have gone into making this into a world rather than a set of FPS levels. It’s all in the little details, like the multiple paths or all the guards have something unique to say to me and even wishing me luck and the like when I headed back out to do the mission. It sounds as though the next section of the game will be another non-violent and exploring one. This is potentially going to be much more of an RPG than SS2.