Before I start out, there are a few things I forgot to mention yesterday. First off getting the game to run in widescreen. I was pretty surprised in a game this recent and with subsequent patches that it didn’t have this built in but it is possible to get it running manually by editing two text files and then hex-editing a further file. The process is described on the widescreen gaming forum and seems to work very well from what I’ve seen. The movies are stretched out of size as the black bars are encoded into the video. It would be possible to re-encode them but more hassle than it’s worth. It seems to work near flawlessly in the game itself although I have noticed a few cutscenes where I seem to be zoomed in on torsos and peoples heads are cut off.

Secondly, the loading times. Every time I load a save game or move between levels the game drops to the desktop for a few seconds before slowly loading the level (taking maybe another 10-15 seconds). The PC I’m using is way above standard specs even for 2010 with a 3 drive striped RAID array so I really don’t expect load times like this for a 2003 game. If I get into a situation where I need to frequently reload this could be a real problem. God knows what it was like on your average 2003 PC.

Thirdly, after going through the grief of moving my blog and all the images when I changed ISP, I’ve just migrated back to my old ISP this morning. I won’t go into names or details as its not relevant here but lets just say that I wasn’t exactly impressed with the service I received from my new ISP despite them supposedly being the highest rated in the UK. I’ll definitely leave the blog here now it’s moved so the address won’t change again but I probably ought to cancel my webspace with Freeola and move the images & all my webspace back to IDNet’s server. The quickest way to update the links will be to export the blog, do a search and replace on it, delete all the posts here then re-import it. Don’t be surprised if all the posts and images vanish again for up to a day this week while that is going on. 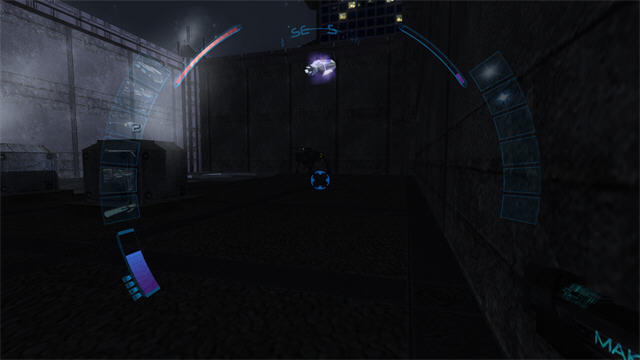 Onto last nights play then. I only managed about another hour but made some progress. I start out trying to get into this penthouse apartment. I find my way onto the roof of the building and since it is guarded by a large robot this looks like a promising spot. I’ve got an EMP grenade which takes it down and I jump through a vent in the roof into the apartment below. 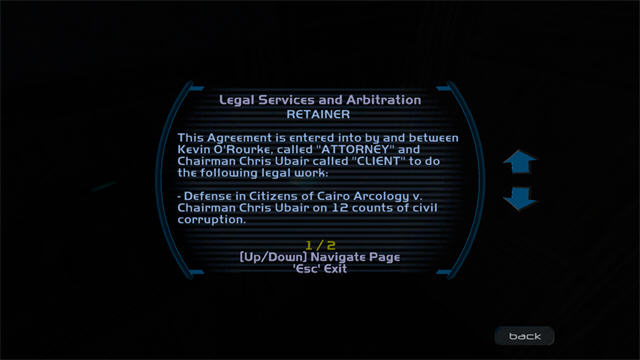 The apartment I find myself in turns out to belong to a lawyer. I knock out the bodyguards and have a search around in here. I don’t find too much but he does have a vault which I hack into and steal the weapons inside + get a look at this interesting note. This completes a side mission which I haven’t actually been set yet but will find out about later. 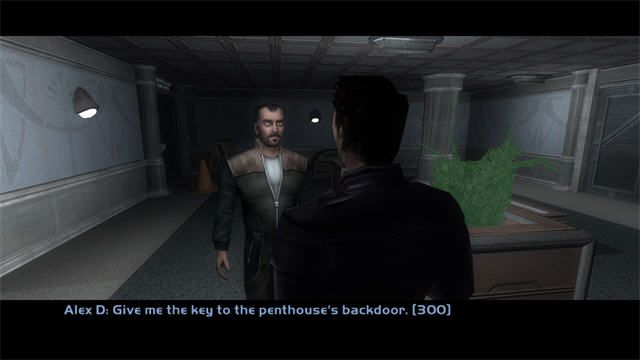 I still need to get into the penthouse then. Back in the corridors outside I talk to a janitor who offers to sell me the key to the penthouse door for 300 credits. I’ve got the money so I take him up on this. 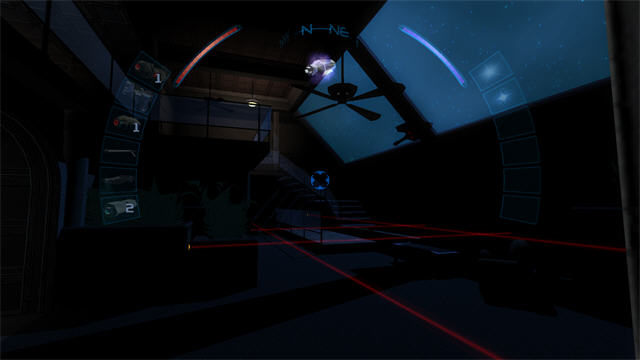 The penthouse initially looks well secured with laser beams everywhere. I don’t have the skill to hack the security console but it turns out I can just jump over all these beams. I’m surprisingly bouncy and get some serious height when jumping, presumably due to biomods. I also have to sneak past a camera. Something I do like here is that I can hear the camera’s motors and when it reaches the end of a sweep and changes direction. It’s a small detail but vital when you are hiding out of sight round the corner and it’s little details like this that make sneaking worth the effort. 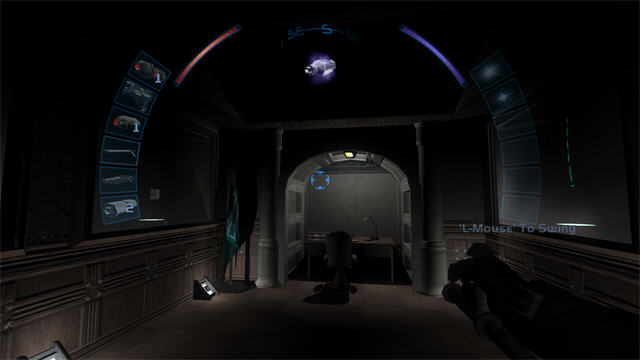 Through here is the vault I was looking for. I discover a shipping receipt mentioning a new weapon called the Mag Rail which is being developed for the Templars. This is what the Order were looking for and completes this mission.

Also in here are a load of glass cabinets. One contains an energy sword which was one of my favourite weapons in Deus Ex but doesn’t appear to work as well here. There is also a weapon mod which I use to give an EMP effect to my pistol. This means it will use ammo up quicker but it should be more useful in dealing with bots. 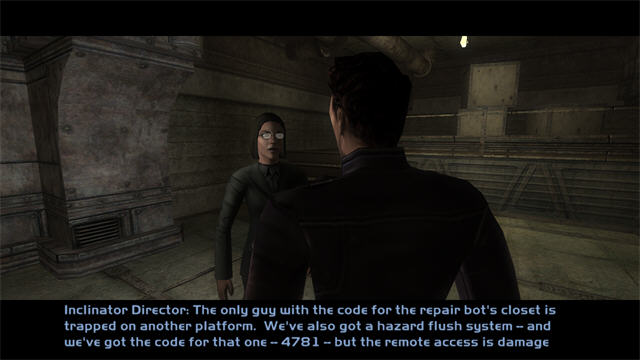 The Order want me to head to Lower Seattle to meet up with them next. To get there I have to pass through the Inclinator facility which is where I go next but there has been a radiation leak that needs fixing. I offer my services as a contractor. There are a host of ways to go about this mission but I choose to go for the nearest air vent. I have to take out a spider bot first but then its just a short walk to a switch to flush the system. I report this to the Inclinator boss and get paid for my trouble. 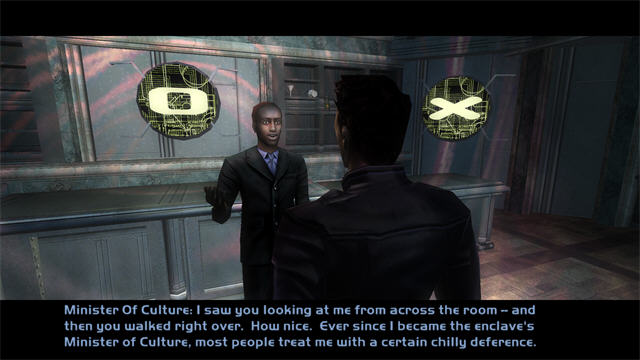 There was a nightclub outside that I couldn’t get into before since I didn’t have the money. I decide to have a look around there before I go any further. The club is a bit sparsely populated but it’s more convincing than the bar in Deus Ex with some half decent background music.

I bump into the culture minister who appears to be into men in a big way. He offers to give me the key to his apartment so I can meet him there after I run an errand asking out another bloke on his behalf but since I’ve already broken in I turn him down. I do like the fact that there is another very different alternative to the one I used earlier even if I discovered it too late for it to help me out. 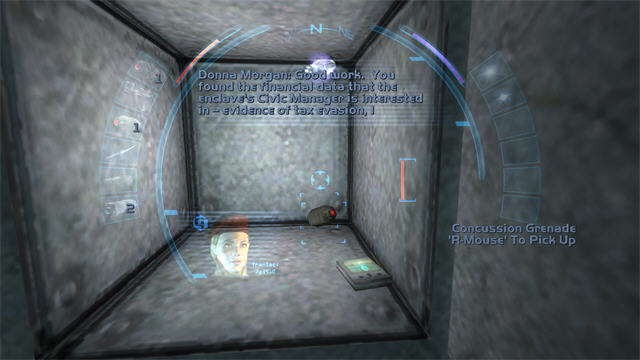 I have a good explore around and by climbing a wall near the dance floor I break into another vent system and into a restricted area. Strictly speaking I probably shouldn’t be here as I have to knock out a couple of guards but I inadvertently complete another mission I haven’t received yet when I find evidence of tax evasion by the clubs owner. The Order want me to tell the WTO and receive a reward for grassing up on him. 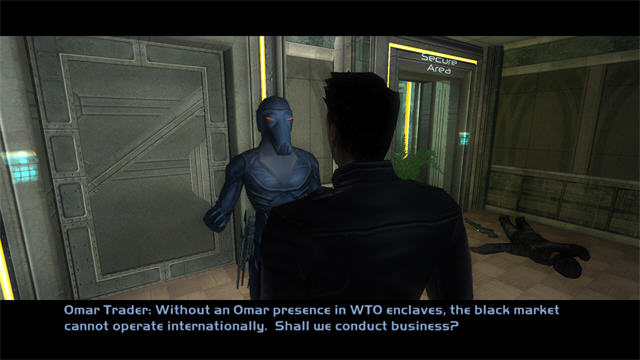 There is more of the club to explore first and after taking out another guard I meet someone or something that is apparently called an Omar. He is operating the local black market and among other things he has a black market biomod he will sell me. I’ll get better prices off him if I take the trouble to carry out a favour for him first. He wants me to go to the clubs basement and get a tissue sample from a mutant body that is being held there. 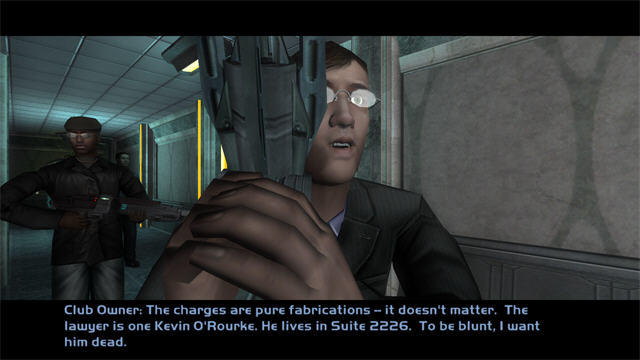 I found a key to the clubs basement when I uncovered the tax evasion. I just need to find the door. On the way, I run into the clubs owner who wants me to kill a lawyer for him who lives in Emerald Heights. I’ve already been in there and taken out everyone I saw although I used non lethal force at the time and that can’t have been enough to complete this mission. 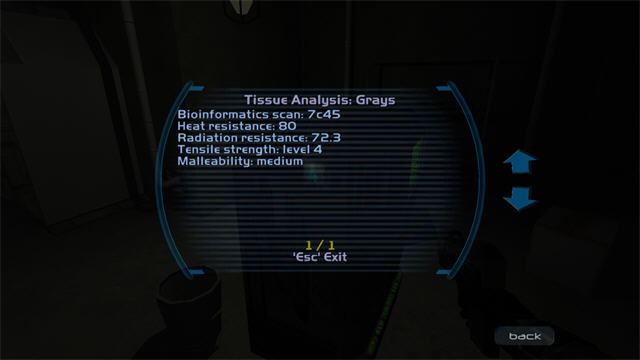 I find the body in a tank in the basement without much incident. It is a grey left over from Versalife. In return for the info, I get a free black market biomod plus reduced prices which I use to buy another of these biomods. 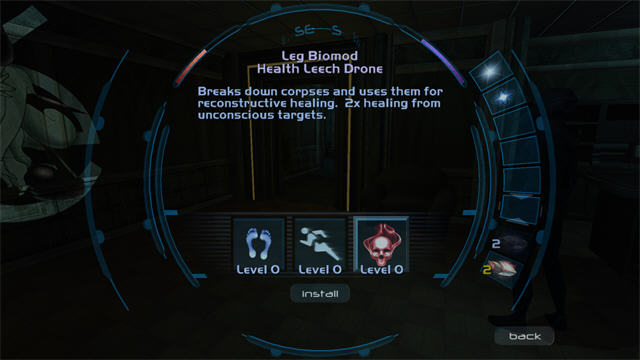 I discover now what the red biomods are about. They are unofficial options only purchasable/upgradeable with unofficial mod cannisters. There is a leg mod that has the option to heal from dead bodies. This sounds interesting so I decide to give it a go. In hindsight, it’s a bit too similar to my regeneration skill so it was a bad choice. 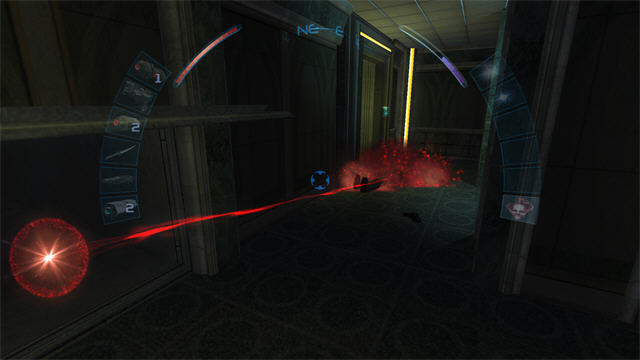 I find a nearby body and give it a go and a big red blob emerges and sucks up the body whilst regenerating my health. This thing chews up energy pretty quickly. If I upgrade it enough, it also works on live bodies and would become an offensive weapon. 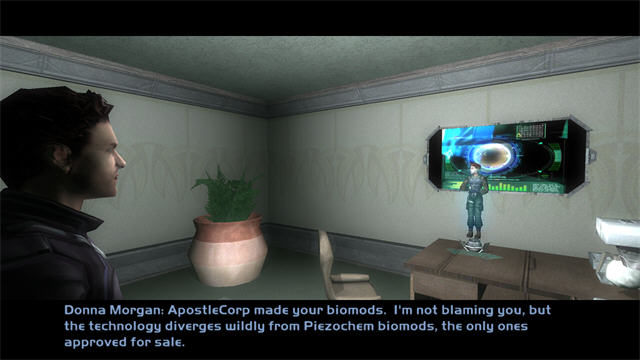 I have to use the Metro station to get to the WTO base. I’m not sure I take the route I should do but I end up breaking into the ticket office and disabling the barrier that stops me taking the train. I think the ticket clerk was being held captive by some thugs but I may just have taken out the legitimate security for all I know. It gets me a free train ride anyway.

I talk to the WTO leader Donna Morgan over the communications system in her office. She wants to know about the attack on Tarsus but I don’t have a whole lot to tell her. The WTO motives appear seriously corrupt and she is surprisingly honest about it as she tells me about wanting to control the biomod corporations and restrict who can get what mods. 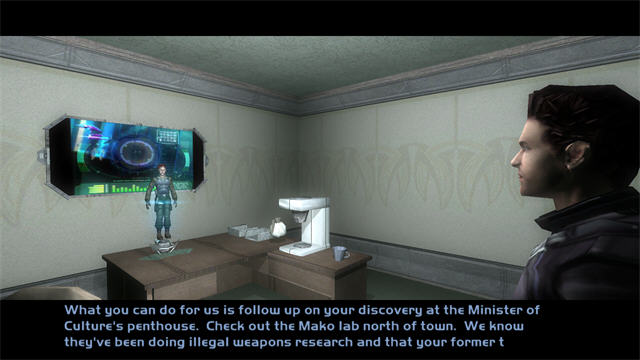 She gives me another mission to check out a lab that has been illegally doing weapons research. I’m going to need to charter a pilot to fly me out there and I can meet up and pick pilots (at varying prices) down in the local bar. 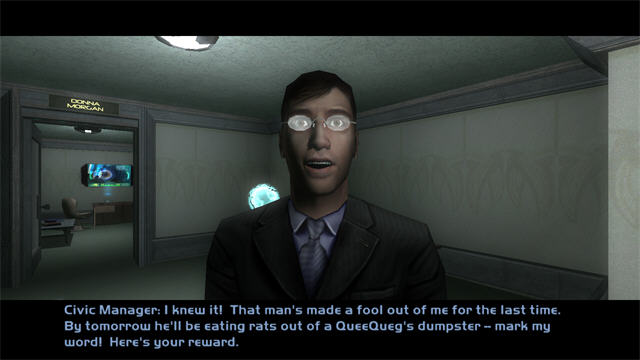 While I’m here, I inform the civic manager about the club owner and get a bit of cash for my trouble. 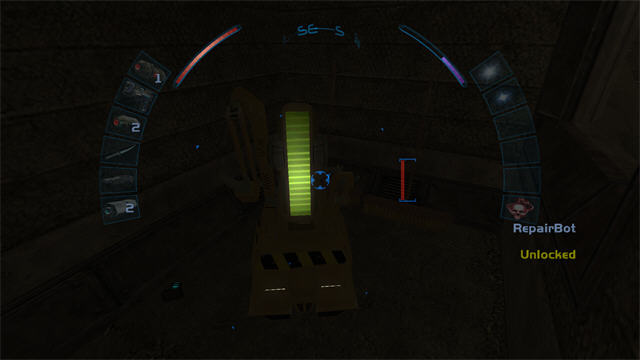 I head back to the Inclinator now, to attempt to meet up with the Order once again before I start chartering planes. I discover a very useful recharge bot behind a locked door here. I’ll probably be back here quite a bit for recharges now given the chance. 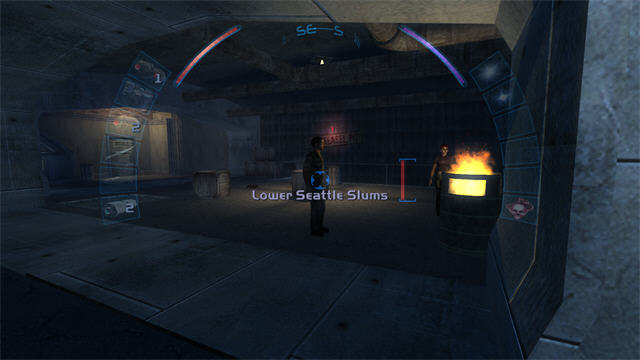 The inclinator appears to be a huge freight train which transports me to Lower Seattle. I don’t get to see it move but flicking the switch transports me instantly. Lower Seattle isn’t in the best of condition by the looks of things but I leave exploring it for my next session.

I was expecting the plot to branch but it appears that I can play all sides for the moment in this game. I’m been given missions all over the place and each location is so thick with plot and goals that I’m completing missions I haven’t even been given yet. The multiple options for each mission are a bit more advanced than anything I saw in Deus Ex. They do feel hard to believe at times with vents everywhere but overall I’m impressed with the level design and really enjoying IW.