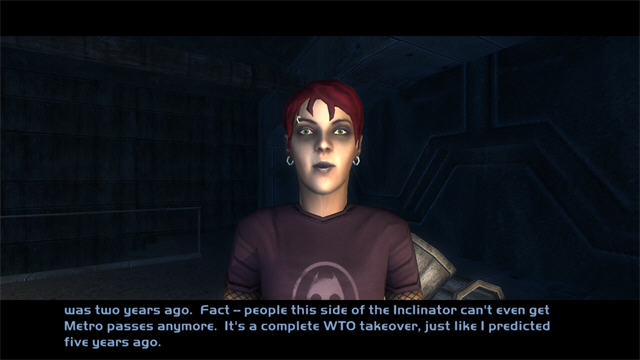 One of the bums hanging around outside the Inclinator is a mine of information. She says that the WTO have taken over the facility and no one can get passes out of Lower Seattle any more. She also points out the Greasel Pit nearby where I could hire a pilot if I want but I’m heading to check out the Order first. 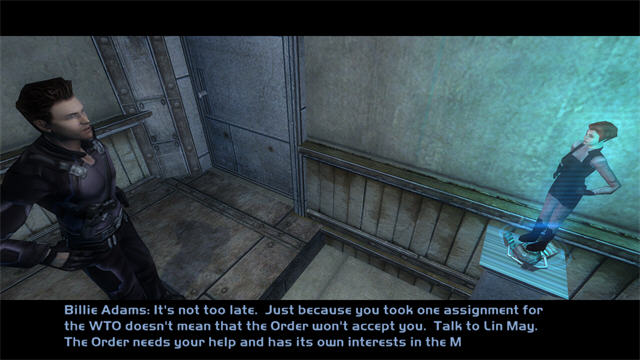 The Orders church is just down the street. I also pass the coffee shop I was asked to set on fire a while back but I’ll ignore this mission. Billie pops up on a communicator when I get to the church and says that the Order will still accept me despite me carrying out a mission for the WTO. 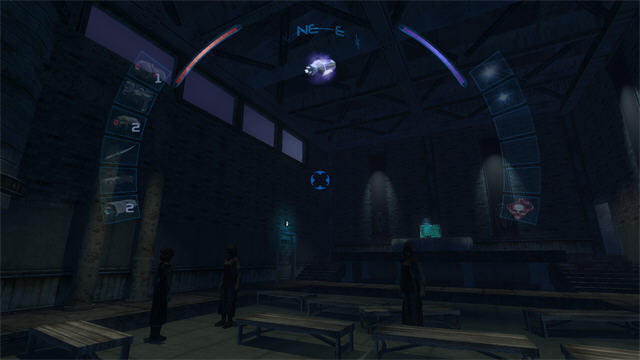 The order hang out in what looks like a monastery. Having decided to pick this side early on, I could change my mind as I don’t think much of organised religion which is what this comes across as. The cause may be a good one but I don’t like dogma in any form. It’s not too late to change my mind yet anyway but I head on in to see what the leader here has to say. 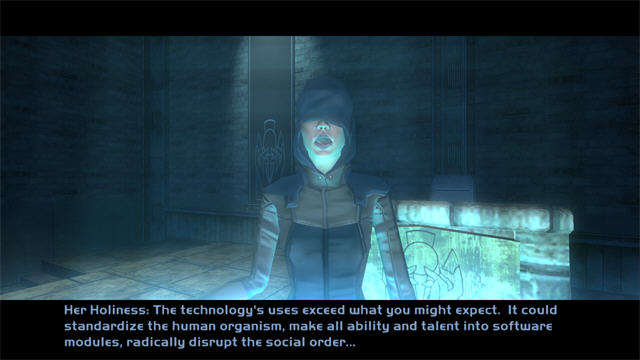 She talks about how the new biomods which can be used on anyone, could be used to standardise the race and effectively turn us into machines. She wants me to help to defeat my creators and sends me into the side room to talk to her High Augur for more details. 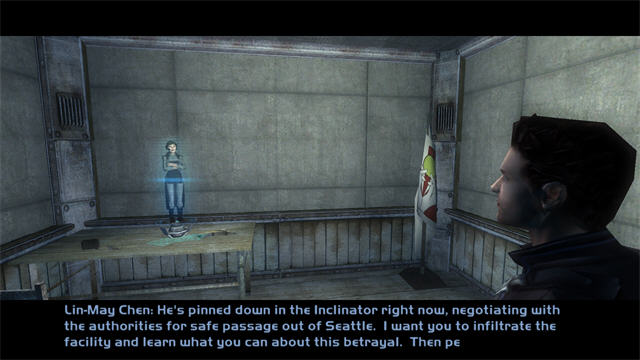 The High Augur Lin-May wants me to find her Captain who has turned traitor and is pinned down in the Inclinator negotiating with the authorities for release. This is presumably the same captain who disobeyed orders and took Tarsus apart at the start of the game. This all lends their story about the casualties not being intentional some credibility and I’d assumed till now it was a lie. 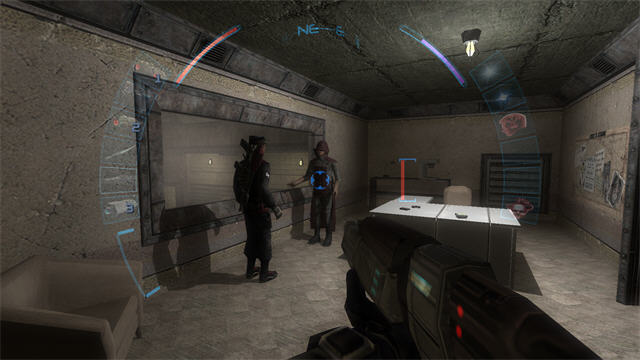 I head for the Inclinator and fight my way to where the Captain is having a discussion about his defection. It turns out he and others are being bought out by the Templars who are recruiting an army of mercenaries for their own purposes. 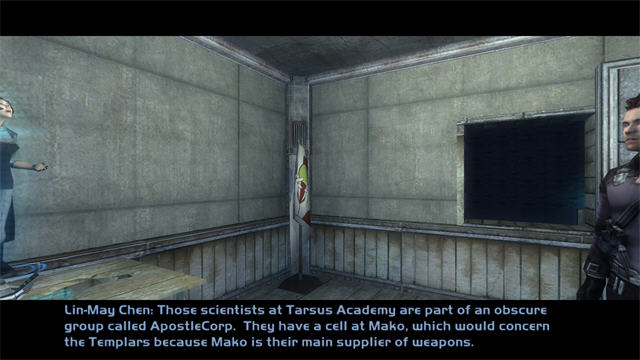 Lin May gives me a bit more info and everything seems to be drawing towards this Mako weapons factory which the WTO already wanted me to go out and have a look at. She wants me to assassinate the lead scientist there who is developing bio-mods like my own and also to destroy the plans for the new Mag-Rail weapon. 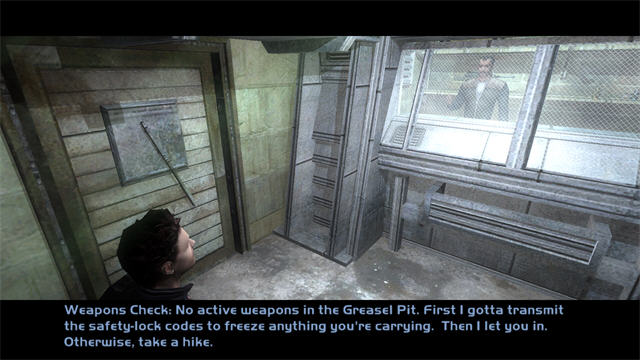 Next stop the Mako factory then. I head for the Greasel Pit to find a pilot. This place really is a pit and not it says something about Lower Seattle that anyone would come here. Aside from drinking, you can bet on Greasel fights if you want but I give this a miss for now. 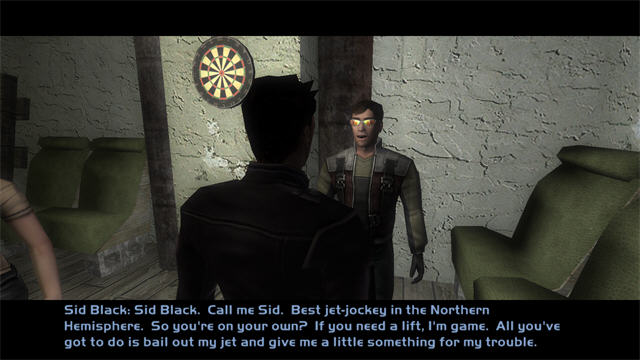 I quickly find a pilot but I’d need to retrieve his jet which has been impounded. He would also charge me 500 a flight still. 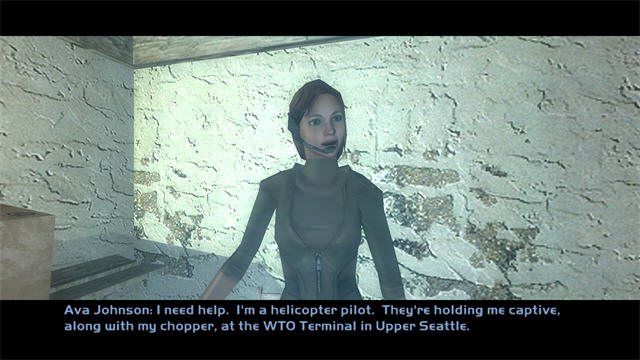 In a nearby room, another pilot is being held by the WTO in the air terminal. She would fly me for free if I can rescue her. The choice seems pretty clear cut so I take the long walk to the terminal. 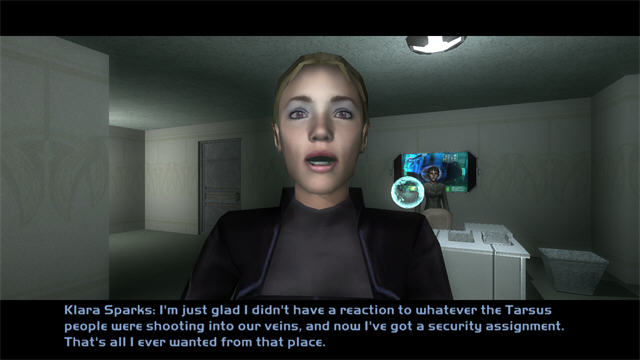 The long load times are starting to bug me a bit by now. Walking over to the terminal should take no time but with 20 seconds loading every time I change location it isn’t all that quick. When I get there I run into Klara who has got a job with the WTO and seems glad to be shut of Tarsus. 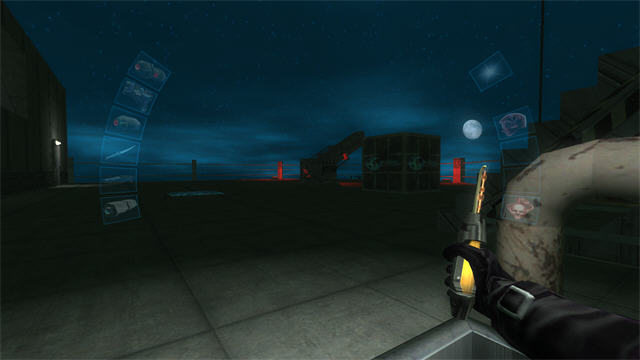 Rescuing the pilot means disabling two missile batteries and then activating the pilot beacon. The place is crawling with bots and guards and I don’t have much ammo which makes this all a bit tricky but I sneak and chop my way through to the first missile battery and take it out with a grenade. I’m guessing the WTO won’t like me much after all this. 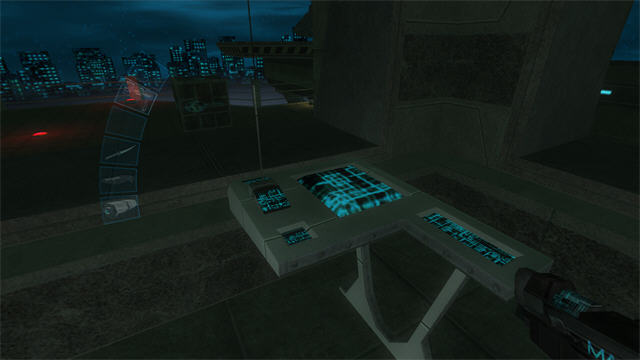 The other missile battery is a couple of seconds walk away. I destroy it in the same manner, then head up to the control tower, activate the beacon and then make a run for the chopper. 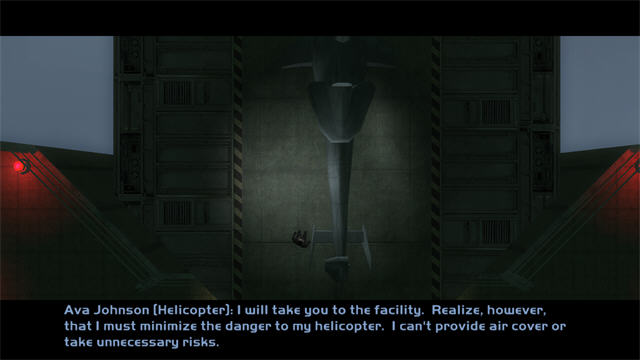 The pilot is true to her word and agrees to fly me around for now but she won’t take risks or provide air cover. It’s possible that I may have received a bit more help if I’d gone for the other pilot then but I’m sure this will be ok. 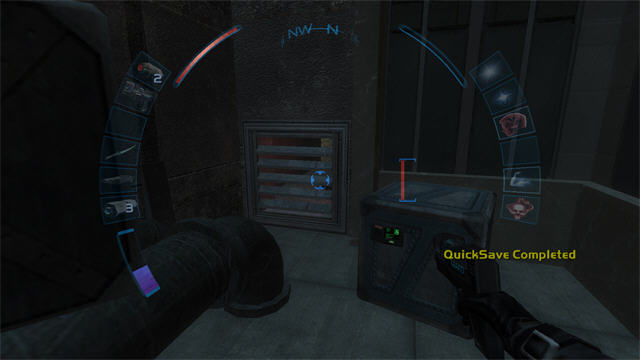 She drops me off near the Mako factory and I spy a likely looking duct to crawl down.

Thats all I had time for yesterday. I’ll attempt to get a longer session in today as I’ve barely spent any time on this game for the 3 days of blogging. Some major news for retro gamers today is that Activision have signed up with GOG starting with a first day release of Arkanum (which I’ve never played but will be doing soon) and Gabriel Knight (which I have played and rate as one of the best adventure game series ever). It’s not just the games that they will be bringing with them that makes this significant for me, but the fact that a company that large would sign up for a DRM free distribution system. Let’s hope it makes Activision a load of money and that EA are paying attention.