The Wing Commander CIC will be celebrating 15 years in a couple of hours time with the usual birthday chat, trivia, quizzes and no doubt multitudes of updates on the site. While I’m waiting for that to start, here is one of the final bits of Wing Commander memorabilia I’ve not already put on the site (at least as far as I can recall):- 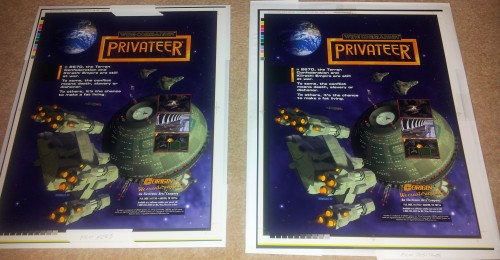 It’s a pair of proofs for a full-page Privateer advert + the negatives/positives they were created from. The one on the right was created with the positives and the image is slightly darker and clearer but that’s unlikely to show in one of my photos. Whatever the quality of my camera, I have to say these do look good in the flesh. Later adverts had more screenshots and text with a smaller boxart image which may have done a better job of selling the game but was nowhere near as pretty.

The early date of these (October 1992) puts them almost a year before the actual September 1993 release date with the screenshots used being the mockups I just about remember seeing in press releases of the time. The logo is noticeably different to the one that was used in the final product and for some reason the year (2670) is one year later than the 2669 used in the intro cinematic of the game. The Origin working culture is once again in evidence with the fact that the timestamp on these is slightly after 3:00 AM. I’ll be attempting to at least match that time at the CIC bash tonight but whether I’ll manage it is highly debatable.