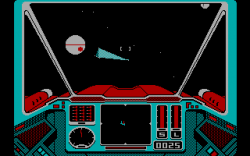 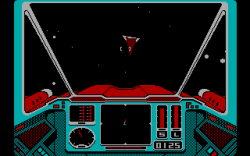 The escort mission involves escorting the blue and white Orionese envoy ship to a neutral base planetoid. This ship is relatively slow and unarmed and simply heads straight for the planet while I zip around trying to blow up the enemies. I found this to be the hardest of the four missions as it gets tricky to keep tabs on exactly where the envoy ship is. It soon vanishes off the edge of my radar while I’m trying to reduce the opposition. I’m left guessing although the planet we are heading for is visible from any distance so I can aim myself at that, fly flat out and hope to spot it. At no point am I aware of any enemies actually attacking the envoy but it still keeps getting destroyed while out of sight. 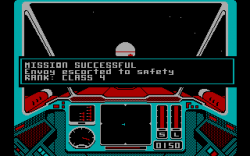 After 4 or 5 attempts, I manage to just get it back on screen in time to see it land on the planet which appears to be the key to beating this mission. My class rating is middling but I’m not going to concern myself with that for this playthrough. 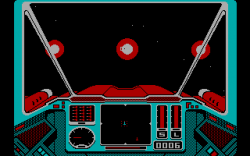 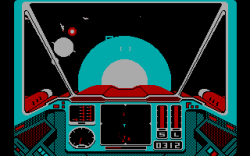 The next mission is to destroy canisters of the deadly Biotek-M microorganisms. On this difficulty level I have to clear two sectors which I was expecting to mean combing the sector looking for them but instead the canisters are arranged neatly in a 3×3 grid. 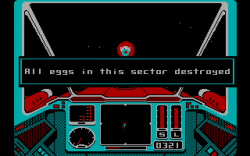 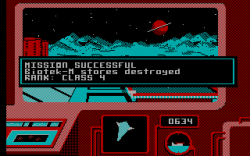 This is the easiest mission of the lot and I simply shoot these stationary targets down with either lasers or missiles in both sectors. There are some fighters buzzing around but they are extremely ineffective in this game and I ignore them for the most part. Some of the canisters appear impervious to lasers and I’m forced to use missiles but a new stock is a warp and landing away. To complete the mission, I have to fly back home and land once again. 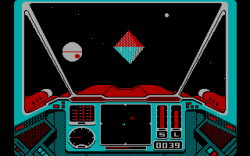 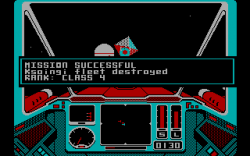 The fourth and final mission is to stop the Andromeda sword cruisers attacking Herculis base. These cruisers look remarkably similar to the outpost stations apart from the colouring and the fact they are flying at full speed for Herculis. They don’t shoot back from what I could tell so I simply close in, keep shooting, warp off to the location of the other cruiser and do the same. It’s nearly as easy as the previous mission except that there is something of a time limit while the cruisers fly toward Herculis + touching the cruiser brings instant death.

That appears to be about all this game has to offer. I could try for better efficiency ratings but there isn’t all that much incentive. This has to be the briefest space sim I’ve ever played as I must have got through these 3 missions in under 30 minutes. The graphics weren’t bad considering the limitations and the physics work well. Turning the ship is just like Wing Commander rather than the rotating movement used in Elite and it’s a lot more natural to fly because of it. DSOC takes no real advantage of this though with a distinct lack of enemy variety and far from exciting combat which is usually best avoided. The game also appears bugged at times with my lasers having vastly varying effects and my ship flying backwards during numerous landing attempts which then had to be aborted.

DSOC comes across as being arguably more of a tech demo than a fully developed game. I would imagine from playing it that the simulation was developed first and then a game built around it afterward. This was more or less the approach that was taken for Ultima Underworld as I understand it but there is a whole lot less for the player to get stuck into here. It’s a worthy first attempt and I’d have put more effort into bettering my score back in 1987 but it’s no competition for Elite. I always enjoy trying out old and obscure games though and it’s been interesting to see where Space Rogue sprung from.