I’ve had my first couple of sessions on Elite and I have to say that in this day and age it hasn’t been the most accessible of games to get into. I had about 45 minutes to give it a shot on Monday night so I thought I’d have a quick fly around to find my feet then start in earnest on Tuesday. The first hurdle is that I don’t have the manual. I do have Elite Plus but there are enough differences to the controls that this wasn’t always entirely helpful so rather than doing the sensible thing and looking for the right manual online I decided to use trial and error.

Something I’m rediscovering is that the controls on BBC games appear to be almost random with no common scheme adopted in these early days of computing. It’s a slightly similar experience to no one being able to make up their mind which joystick port to use on the C64 but at least the controller was standard once you got over the first hurdle. Here the keys could be worse for steering with s and x for up down, < and > for left and right but it then starts to get strange with space to speed up, / to slow down and a to fire with that last one being the cause of many space stations taking offense as I accidentally shoot them while trying to dock. 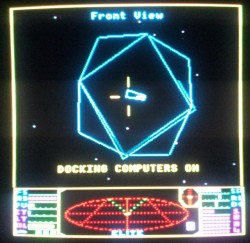 Talking about docking, it’s not easy. Elite does have save games but only on space stations most of which have to be docked with manually at the start of the game. All progress is lost if you mess it up and to start out with I couldn’t manage to dock successfully to save my life. The space stations all rotate around an axis and in order to dock you have to be able to line up perfectly with the docking bay, matching rotation speed by carefully timed presses of the keys in order to fly perfectly through the slot and land. I was constantly finding that I wasn’t quite lined up right and when I closed in the door would get gradually off center resulting in a splash dive into the station.

Making this trickier is the control scheme itself. I can rotate left and right and pitch up and down but cannot turn left and right. I.e. To turn left I have to rotate 90 degrees first and then pull up or down. It’s not at all intuitive for anyone raised on X-Wing and Wing Commander.

All in all I wasn’t sure that playing this was such a good idea after my first attempt. I’d not managed to get anywhere and had more or less decided to give it another quick go and then swap to Elite Plus instead but on the Tuesday something clicked and I suddenly started to get the hang of it. I found myself able to dock every time, building up a little money in the process and Elite had me hooked. That isn’t to say that life became easy but I was moving forward. I said at the end of the last post that I wasn’t going to play another RPG next but starting out in Elite is very much the experience of a starting character in an RPG with everything in the world being against you and having to take baby steps before you can really go and explore. 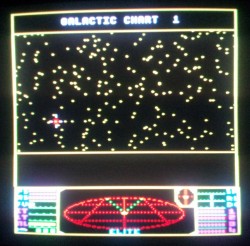 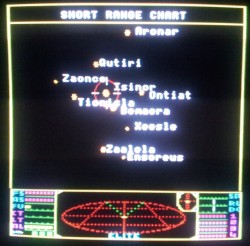 To get into the game mechanics at long last, Elite is a space combat/trading game with a monumentally large procedurally generated universe with 8 galaxies each with 256 systems to explore. Each system has a sun and a single planet with a space station orbiting that planet. All the trading, ship upgrades and the like are done in these space stations. There isn’t a goal to the game as such although I do understand there are 2 or 3 missions which can be found along the way. I intend to play long enough to see at least one of these – I think the last would require me to be Elite status (9800+ kills) which may be a step too far. 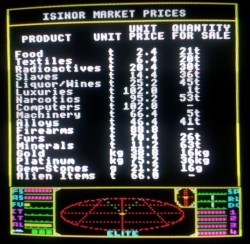 All the planets have different technical levels which affect commodity prices and the equipment available for my ship. I’m stuck with the same Cobra Mark III ship for the duration of the game but there is a good selection of weapons available with various lasers, missiles, extra cargo capacity and most usefully of all an automatic docking computer which saves a whole lot of time even when you do know how to dock. 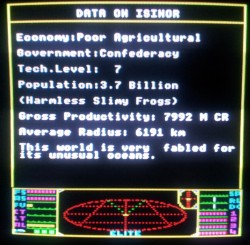 It’s possible to bring up a description of each planet at any time which offers some clues as to what prices are likely to be when you get there. I can’t pull up a full price list until in system but it is possible to do this while in flight so I can pop into a system, decide I don’t like the profit margin and head on to green pastures provided I have enough fuel. My ship is limited to start with to just 20 tonnes of cargo. There are some high value commodities such as gold and gems which don’t appear to take any room up since they come in smaller units. 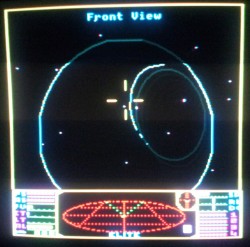 Speaking of fuel it doesn’t come for free in this game. It’s only used for hyperspacing between systems and doesn’t drain in normal flight but it’s important to fill up every time you stop. Later in the game I understand I can buy fuel scoops and fly out to the sun to refuel for free. This is a great little detail in a game of this age but it may be a while before I’m equipped to try it. 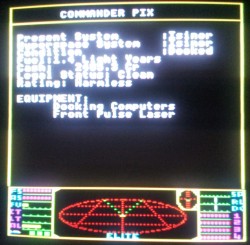 Gameplay so far has basically consisted of filling my hold as much as possible, hyperspacing between two systems, docking, selling everything and then repeating. I’m following some advice and travelling between low and high tech worlds taking computers one way and booze the other which is raking in the credits now I can afford to fill up every time. 100 credits at the start really is absolutely nothing and it’s hard to make a decent profit when you can hardly afford any cargo to trade in the first place – you need money to make money in Elite. I’ve got myself up to 3000 credits now even after buying a docking computer and a cargo bay expansion.

When hyperspacing into a system I’m always miles away from the planet and have a long approach which is where most of my time has gone so far. There is a jump button to skip ahead if there are no ships around but it’s still quite a slow process. It has been helped by the automatic docking computer once I could afford it. I’ve not got into a whole lot of combat so far and I think I’ll save that and the flight systems for part 3. I can cope with a ship at a time but when I have been set upon by a band of pirates I’ve not been equipped to deal with it and have really been relying on luck and reloading.

After initially putting me off, I think the difficulty is part of what has drawn me in ultimately. It provides the drive to build up my ship so that I can travel more freely, start to take on the pirates, maybe do a little bounty hunting and most importantly get rid of that “Harmless” rating on my pilot screen. I’ve got my eyes on a military level laser next but I’ve a lot more trading to do first.