At the end of part 2, I was trading my way up to a military laser. After much toing and froing between planets I got the needed cash and also the money for an ECM, an extremely useful gadget which blows up any missiles in the vicinity for a small energy cost. At this point I finally felt able to try some ship combat. 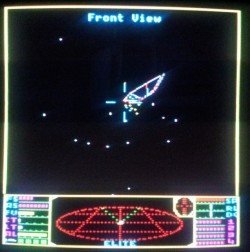 My ships systems are similar to Wing Commander in some ways. I have a rear and forward shield which slowly recharges if depleted. There is no armour and subsequent hits drain energy instead. Once all this energy has gone it’s game over. This energy also recharges over time although more slowly if charging the shields. This means in effect that I don’t take any permanent damage although unless in the vicinity of the planet I never get enough time to fully recharge if badly damaged.

I have views from both sides and rear of the ship available and can mount one of any weapon I can afford to each but there doesn’t appear to be a whole lot of use in the side views for this. Fighting with the rear turret is a realistic option and does give the front shield a chance to charge up again. The military laser I saved up for is extremely effective and will take down any ship in seconds provided I’m aiming well. It does have the downside of overheating fairly quickly in another game mechanic that made it into Wing Commander. The lasers here in Elite have something of a mind of their own and move around to a degree within the crosshairs so it’s not possible to be precise at distance.

There are some other weapons available with a one-use energy bomb which destroys anything in the area but they cost a fortune. There are also missiles which need to first be locked on simply by getting any target in the crosshair momentarily. I can’t say I’ve found these to be of any real use as if I have a target in my crosshair it’s far quicker to use the lasers. Combat is extremely brief and in truth quite basic. With the limited manoeuvrability and overpowered lasers it’s just a case of getting a ship in the crosshairs with no need to aim ahead or attempt to tail them. The enemies come in packs of up to 4 and the initial approach to a pack of this size is by far the most dangerous part with only a limited amount I can do to protect myself. Offence is the only defence and it is entirely possible to take down a full pack in the first pass with the main difficulty being the lack of visibility among the explosions and the slowdown. The combat model is crying out for the afterburners used in Wing Commander which added some spice to the mix. 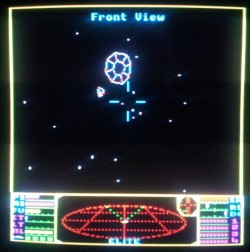 There is no target locking or any particular way to identify the good and bad guys other than their behaviour. Some ships are only ever manned by hostile forces such as the Thargoid flying saucers but others can be used by different classes. In the end I’ve given up trying and am taking a shoot it if it moves approach hence I’ve usually got a fugitive rating but it does help to rack up the kills when everyone is hostile.

The radar at the bottom middle of the screen takes a little getting used to. I think I originally played Elite Plus after Wing Commander all those years back and remember having real difficulty with it then. It essentially shows a flat plane of space with lines coming from it to the targets to represent how far above or below that plane they are. There is some colour coding for classes of ship but again this doesn’t identify friend or foe expect in the case of Thargoids. 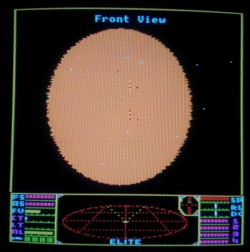 I did try flying out to a sun to grab some fuel and it does indeed work at the risk of overheating my ship and blowing up. Given the relatively cheap price of fuel and the number of enemies lurking around these further reaches it’s never going to be worth getting fuel this way just for financial reasons. In fact it’s hardly worth travelling between systems once the military laser has been bought. Money stops being the issue and it’s just about racking up kills and increasing my ranking. I’ve been achieving this by randomly jumping around the system which generates almost constant battles. There is quite the variety of ships to come up against but little noticeable difference in all honesty when fighting them. Some are more likely to launch missiles and the Thargoids are particularly laser happy but all are much the same and I tend to do my best not to let them get close enough to be identifiable. 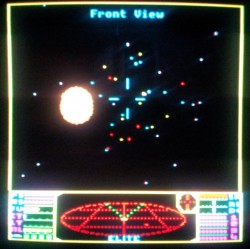 Graphically the game doesn’t exactly look amazing these days but it’s nice enough for 1984 and the graphics do the job. It would be quite easy to get swept into the universe of Elite back then given how few 3D games were available. The stars are always visible through the ships which is a minus in the realism department but at least the lines on the ship models are obscured appropriately. The Master version I’m playing has some added colour over the original also which brightens things up. The hardware does show it’s limitations in some serious slowdown especially when near a planet. I’ve taken to looking out the side view when approaching a space station to dock in order to get there more quickly.

Some of the cheats the game engine uses have also become apparent by this point. For instance it’s possible to do short jumps around the system when asteroids or cargo is floating around. However this cargo then maintains it’s position relative to me after the jump. When I’ve been hopping around racking up kills I’ve tended not to bother picking up cargo as I don’t need the money meaning I end up with debris orbiting me in ever increasing quantity and slowing the game down. Something else I’ve noticed is that the space station appears to be randomly generated when near enough the planet but it has a tendency to un-generate and then appear somewhere else often several times. 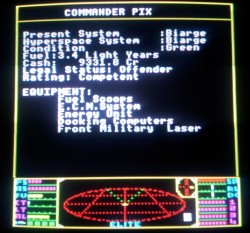 I was expecting Elite to open out to me once I had my ship better equipped but it seems to me that after this point there is very little left to achieve. All the basic elements that went into Privateer are there but Elite is in dire need of a campaign to play through. This was a limitation of the hardware at the time of course especially with this game being designed to load onto a 32K machine via cassette. Even within the limitations some better and ludicrously expensive equipment to be aiming for wouldn’t have hurt. The combat in the game doesn’t offer enough financial reward for it to be a viable means of affording anything expensive and that’s only once you don’t really need the money which is another flaw in the design in my opinion. Shooting for nothing but a one word ranking doesn’t seem like enough of a goal nearly 30 years later when that Elite status is thousands of kills away. I know from experience that nothing happens when you get there from Elite Plus years back. I really can’t complain about the amount of gameplay I’ve already had from of a game of this size but it is showing it’s age.

Right now I’ve just reached competent status. Allegedly I need to double my number of kills from here to get to the first of two secret missions that were put in the game to maintain interest for the player that thought they had seen and done everything. I’ve already reached that point if I’m honest but I’ll stick with it long enough to see that first mission if possible.