As promised the first mission in Elite popped up after I amassed 256 kills. I got a “Right On Commander” message flashing up straight after the kill and the moment I land I receive the following message:- 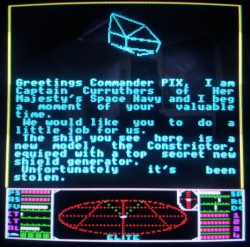 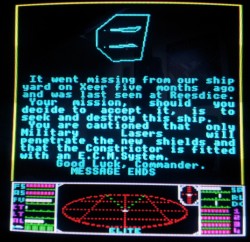 What follows is a wild goose chase throughout two galaxies as I attempt to locate this missing ship. The way this is handled is a little quirky as I get messages through text at the bottom of the planetary information screens after landing on each space station. These take the place of the usual planetary descriptions. Once I figure out where to look for these messages it’s a case of following the trail first to Reesdice, then Arexe and on into a new galaxy. 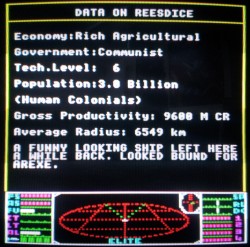 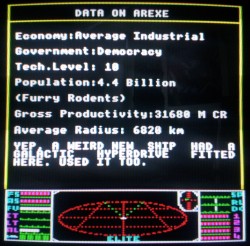 After stumping up the 5000 credits for a galactic hyperdrive, the trail goes cold as the ship is nowhere to be seen. I fly to all the planets within jumping range of the entry point one by one landing at each station and eventually get another clue:- 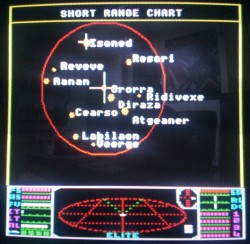 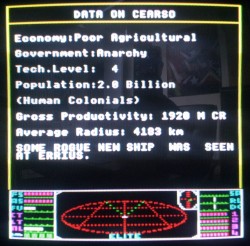 The trail takes me all over the galaxy after this until I finally get told the present location and can attempt a showdown:- 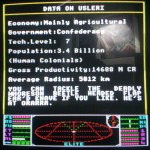 The battle when it comes is certainly longer than most but no more difficult. The only time enemy ships get a lot of hits in is when they are on their first approach. After than it’s just a case of tailing them as close as possible and that’s exactly what happens here. This particular ship does require a considerable amount of hits to destroy and had at least 4 missiles to fire at me while I was chipping away at it. The ECM deals with those missiles and it’s soon destroyed on the first attempt. I get this message on landing:- 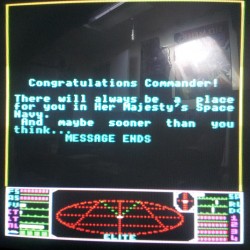 It’s not stated but my reward appears to be some kills since my rating went up in addition to a few thousand credits. Not a huge amount after all that effort but enough to set me up for exploring this galaxy. There is another mission at 500 (in hexadecimal) kills apparently which I would guess is about double what I’m on now. This first mission doesn’t look like much when described here but took many hours to play through with all the travelling around. I wasn’t expecting anything this epic actually and it was a great addition to the game which I’m sure I missed when playing Elite Plus first time around. It didn’t change the basic gameplay all that much but it gives the short term goals to be working toward that I was badly missing prior to this.

As for a final verdict, it’s easy to see why this game is so loved but to an extent I think you had be there at the time to really appreciate it. The speed of gameplay is sluggish not so much in the framerate as the amount of time it takes to dock at every station and travel around. I’d frequently wander off an do something else while waiting for the autopilot to land the ship only to come back and it still wasn’t docked. Elite also suffers from lack of variety and with no real goals a lot of time except grinding kills.

Despite all that there is something undeniably addictive and it is still fun if you can cope with the slow pace. It’s worth a look to see one of the origins of the space sim genre and in terms of gameplay elements there is precious little in Privateer that hadn’t already been done here. Unless you have a serious attachment to the BBC version, one of the remakes such as Elite Plus or Oolite have to be the way to go though as it would benefit greatly from some modernisation.

There may be a part 5 if I ever get the required kills for mission 2 but not for some months as I’ve had my fill of Elite for now and can’t face grinding out another 600-700 kills. I’ll probably fire it up for the occasional go when I’m in the mood and maybe make it there one day. I am still in the mood for space sims and it’s been ages since I blasted through WC4 so I’m going to be trying out the Playstation port of that next.