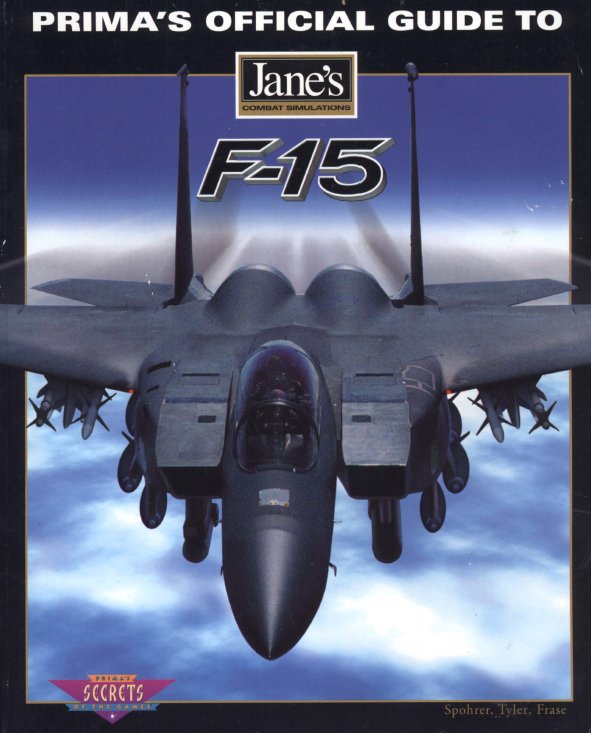 This was published in 1998 by Prima. When I was playing it for the blog, F-15 was a game that I rushed through just to get it out of the way. It’s not that it was a bad game by any means, quite the opposite, but it was in a genre that doesn’t interest me as a rule. Something I learned from all Origin’s sim games is that the further a sim game is set from the date it was published (in either direction), the more I enjoy it. That makes the Wing Commander series my favourite of the lot (by some margin) but I did enjoy Pacific Strike and Wings Of Glory as well.

The F-15 guide isn’t bad at all having said that. It was put together by the same team that had worked on many of the other guides I’ve already looked at before now and they clearly knew what they were doing.

The book starts with around 100 pages of walkthroughs and procedures for all the situations you might encounter and full details of how to approach all the tutorial missions. There is an awful lot of information here, all of which is exactly the sort of thing you need to set you up with the game. The tutorial mission walkthroughs struck me as especially helpful for anyone starting out. There is a lot to remember and it emphasises how F-15 isn’t the sort of game you just quickly play through without investing some time and effort into learning the real skills needed to fly.

There are no details for the campaign missions as they vary depending on what happens throughout the campaign, but there are walkthroughs for standard mission types which should tell you everything you need to know. There is also some of the story surrounding each campaign to set the scene, and the 3 possible outcomes at the end of the Iran campaign.

After this the guide starts to go into the Jane’s level of detail which doesn’t appeal to me especially with lengthy extracts from military training manuals. I’m sure there is a wealth of useful information in there if you want to take the game seriously but I skimmed over it. There is an even more technical section afterwards on the mechanics of F-15 flight with all sorts of graphs detailing how the plane performs under certain conditions, how much damage certain targets can take, how much damage the weapons do, etc…

There aren’t any developer interviews but there are about 50 pages about the development of the F-15, its history of service and the specifications of it and the weapons it carries. As someone with an interest in the development of technology of any kind, I quite enjoyed reading through some of this. It’s not strictly relevant to playing the game but goes down as a welcome extra.

This book was positively crammed full of information and probably one of the better guides I’ve looked at. It’s not the most entertaining of reading and is deadly serious 99% of the time, but we are dealing with a serious flight simulator here so it seems appropriate. It gives an extremely thorough grounding in what you will need to learn to play the game and I’d recommend anyone who fancies playing F-15 has a look at it.