Forge Of Virtue was the self-proclaimed first gaming add-in disk when it was released in 1992, although I’m not convinced that is strictly true. It added a new island to Ultima 7, along with a handful of quests which beefed up your Avatar and provided some nice new items. As such it can be seen as something of a forerunner to the DLC we see in near enough every RPG these days. The only snag with this of course is that it wasn’t the best addition if you had already finished the game. Combined with the fairly expensive price for the amount of gameplay it offered, all the reviews I remember from the time were lukewarm but sales were clearly enough to do the same again with Serpent Isle and The Silver Seed.

This post can only be building up to some Forge Of Virtue items so I’ll get started with a flat Forge Of Virtue box. This might look fairly normal but was a sample which was never opened out into a box or covered with the stickers for the barcode and specifications:- 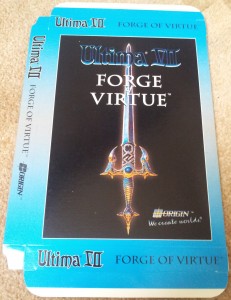 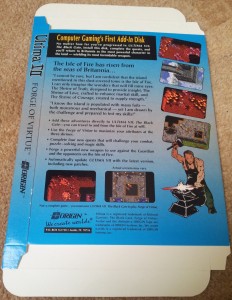 If that’s too far into the manufacturing process for you, I’ve also got a stack of Forge Of Virtue box proofs. These are all printed on cardboard but the box hasn’t been pressed with the appropriate folds and cuts. One of these might not look bad in a frame on the wall but I’ve not done anything other than hoard them so far. I really don’t need all of these so if any reader fancies owning one and has something good to swap drop me a line:- 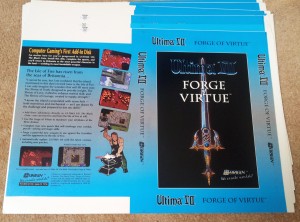