I’ve spent half the weekend installing Windows 8 on various PC’s for family and myself, which has been relatively painless although my HTPC is currently a blank slate after being upgraded from XP. My usual opinion with new versions of Windows is that I’m going to end up buying it sooner or later so it may as well be sooner while it’s cheap. The good news is that Freelancer and just about everything else I’ve tried works fine. Hypersnap 7 didn’t want to capture screenshots but it appears to be redundant anyway since this functionality is now built-in by pressing Start + Printscreen. That’s one improvement at least. I’m reserving judgement on Metro but I can live with it.

When I left Freelancer on Thursday, I’d completed the first 3 missions and was trying to fundraise to get the next. This required just one more mission before I was called back to Manhattan.

No sooner do I arrive than I’m accosted once again by the guy that owes me a small fortune. I don’t get my million credits but he does feel he owes me an incoherent warning about a conspiracy of some description. Before I can realise he got the better end of that deal, he runs off warning me not to follow. When I ask at the bar, it turns out Juni isn’t even here and I have to fly out of system to California Minor. 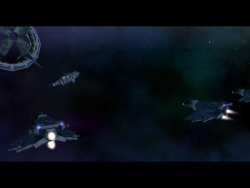 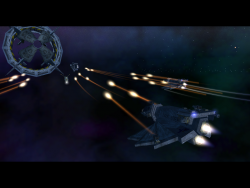 Another Freeport 7 survivor called Rowlett meets me en-route by the jump gate. I really want to know how do all these people know where I am all the time but before I can ask the military show up and deal with him extremely harshly.

I’m hoping Juni might have some answers to all this when I arrive. She has word of a traitor in the Liberty Security Forces and wants to lure them out using a convoy of alien artefacts which I’m to escort. 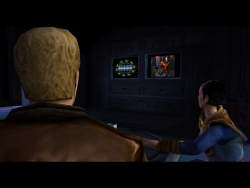 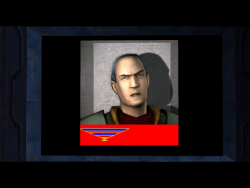 The conversation is interrupted by a news report about Rowlett who is reported as being the leader of the criminal group known as the Order. All this seems dubious to say the least.

Dubious or not, we have a convoy to escorted through an icy cloud to a remote station. We are intercepted in the middle which marks the first and only time I’ve died playing this game so far. Freelancer uses a save point system which avoids having to go all the way back to the start again and I reload on the outskirts of the ice cloud. With the times involved flying to places in this game it’s a welcome concession to modern gamers.

Second time around, I know what to expect and put far more effort into staying out of trouble. I really should have upgraded my ship at this point but it’s just about good enough for me to scrape through with a lot of help from Juni. 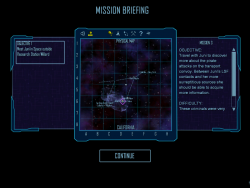 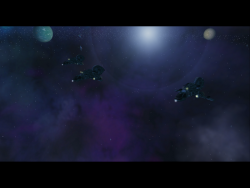 We land and repair but the mission isn’t over yet and I’m still stuck with this same ship for the rest of it. The next part is to travel around with Juni trying to find information about the pirate attack. Once in space, she informs me that her commanding officer has been arrested for treason and all her friends at the LSF have disappeared. Something very strange is going on within the LSF. To rub in the bad news, we are attacked on the way by a squad of Rheinland Valkyries, what their interest is in all this has yet to be revealed.

We meet up with one of Juni’s contacts (Walker) back on California Minor. He doesn’t know much but does agree to help, which is worth more than it sounds with him being Captain of a fleet of cruisers.

We meet up with the fleet in space, who we learn has been mysteriously ordered back to base due to irregularities in the maintenance records. When a distress call from Willard Station comes in they ignore these orders and we all proceed to the station for the biggest fire-fight of the game so far. I get a reasonable number of shots in but I’m far busier just staying alive in this encounter. I’m ordered to take out bombers at one point which I just about manage but it’s a good job I’ve got those cruisers to do my work for me later on in the mission. 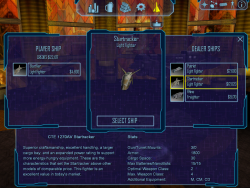 Juni leaves me to my own devices once again and I fly all the way back to Manhattan to buy a decent ship. My options are limited but I select the Startracker which allows me to mount some beefier guns. The new ship also turns out to have a much higher recharge rate, to the extent that even my new guns can barely drain the power from maximum. It’s still only a marginal improvement to my last ship but it’s a start.

I have to carry out several missions from here to before I get the next invite from Juni. These are still much the same but I’m enjoying them more for some reason. Maybe it’s the better ship, or perhaps I’m just getting used to the controls now. It could be the steady increase in difficulty either, the targets are no longer sitting ducks and I’m having to put a whole lot more effort into both staying alive and getting hits of my own in.

Now I’ve started to upgrade, that’s providing a strong incentive in its own right and the game is opening out and feeling a lot more like Privateer. I’d still rather be flying with a joystick but Freelancer can offer some intense combat and the unusual control scheme does give it a unique twist. If I was going to complain about anything in this session it would be having near identical conversations with the random people in every bar but these can be skipped.

A lot of exploded space criminals later, Juni wants to meet up again. Word of my travel schedule has clearly gone before me yet again, as the smoking man decides to introduce himself at long last.

He claims to be the only other Freeport 7 survivor who hasn’t vanished or been killed, and that the reason for all the trouble is his purple egg artefact which he stole. That’s all I learn as just like everyone else I’m meeting these days, he gets shot before he can tell all. I nearly go the same way but Juni arrives in the nick of time, and I pocket the artefact.

I learn from Juni that Walker and all his ships have now vanished, allegedly destroyed 5 years ago according to the records. We clearly need to find out what is going on which will be the next mission when I get around to it.