This will be a short post as I only had about half an hour to spare but I did make it to the end of the next mission. 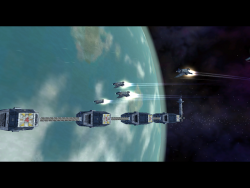 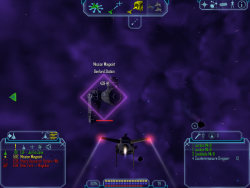 From the moment we launch, things don’t go well. The bodies we left behind yesterday have been found and hordes of LSF ships appear from nowhere closing off all the jump points. After a frantic minute trying to stay alive, Walker appears with his missing fleet, takes out the ship blocking the jump point and we run away to a hidden base in the badlands.

Juni’s associate is all alone on this station monitoring some sort of spatial anomaly. He agrees to help despite the two of us being named Liberty’s most wanted on the news. He starts by analysing our artefact but all he can do is confirm it’s active and point us to an expert in the subject on Cambridge. At this point the LSF who for some reason we didn’t think would come out this far despite us being their most wanted appear. We are to escape via a long disused jump gate.

We hang around for a while trying to save the base but don’t stand a chance and end up running for the jump gate. We are greeted by a horde of bounty hunters eager for the price on our heads at the other side. The soon apparent truth after getting blown up half a dozen time is that my ship isn’t up to this fight.

After enough attempts I make it through by luck, cowardice and a lot of evasive manoeuvring. It doesn’t hurt that the Lane Hackers decide to come along and help purely on the basis that an enemy of Liberty is their buddy. They take out all the opposition while I’m otherwise occupied trying to get as far away as possible. We even get an invite to their secret base at the end of the fight.

After that last mission, I take this as my cue to upgrade my ship and the base is well stocked so I treat myself to a new gun, thruster and shield generator. It appears to do the trick as the next stage of the mission is a breeze although there were only a handful of Rheinland fighters to contend with. We jump out of system and I split up with Juni. She goes to Cambridge to find out what our artefact is and just why everyone wants it, while I return home to Leeds to track down an associate and start fundraising again.