It’s a final couple of scans from Games Machine magazine today. The first is a review for Knights Of Legend on C64 from February 1990.

Anyone who read the early stages of this blog will know what I feel about Knights Of Legend. I did a review on Mobygames for which my one line summary was “Gaming Hell”. It’s a game that could have been designed to frustrate someone trying to blog their way through dozens of titles by stalling them for a year or two and it’s the only game that I had to resort to cheating (savestates not included).

The magazine review is more positive to say the least and it’s awarded the staggering score of 98%. It does warn that you will have to say goodbye to your social life but as far as I’m concerned you couldn’t hold down a job either and have the time needed to play this game. There was still plenty to like about it though if you are prepared to put the time in and have the patience required. Knights Of Legend would probably be my choice for a desert island game for all the reasons that I disliked it. 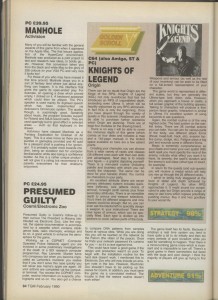 This is apparently my 500th post on here. 500 posts and I still haven’t played Lazarus or sorted out the site navigation/appearance for that matter. The latter is unlikely to happen any time soon but I don’t think I’ll make it to the end of the year without playing Lazarus.

I’ve added 3 new downloads in the Origin books section. I wasn’t happy with some of the cluebook scans on replacementdocs especially Martian Dreams which was horribly overcompressed during editing. I’ve redone that, Savage Empire and Underworld 2.