I’ve played through the first campaign on Netstorm now in 3 or 4 sessions. In the first campaign, the people of Nimbus have been enslaved by the dark lords of thunder, wind and rain and I have to gather allies to oppose them. To say there is a plot to the missions would be a bit of an exaggeration though. They have brief text introductions but it’s really just a series of levels. 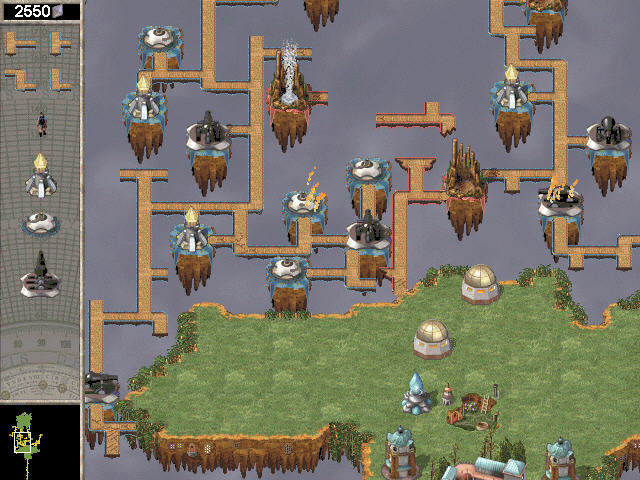 The first mission is straight-forward but things soon get more complex as I have to take on well fortified defences in the second mission. From what I’ve seen, I’m clearly not going to be allowed movable units other than those which collect storm crystals. I can’t build on an island with an enemy temple on it so this means building large forces of static turret defences off the side of the island I’m trying to attack. 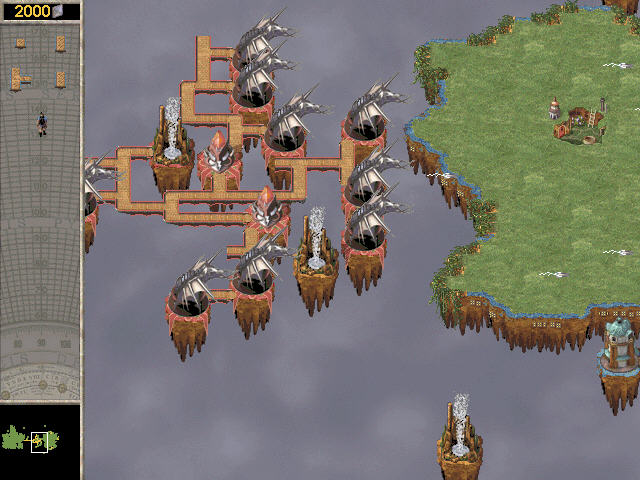 The types of unit I’m allowed to build are limited and vary in every mission forcing different approaches to be taken. I always start with a huge disadvantage, and if the computer A.I. was any good I would be annihilated extremely quickly. For instance in the third mission shown above, I’m under heavy bombardment from these dragon shaped towers which can attack over an extremely long distance but only in a straight line in one direction. Thankfully, I start the map with a barricade up, which is an impenetrable laser fence. This can only be breached by destroying one of the towers at either end of it. If the computer aggressively attacked those towers, I would be dead in a minute but it ignores them allowing me to slowly build around the side and gradually push his forces back. 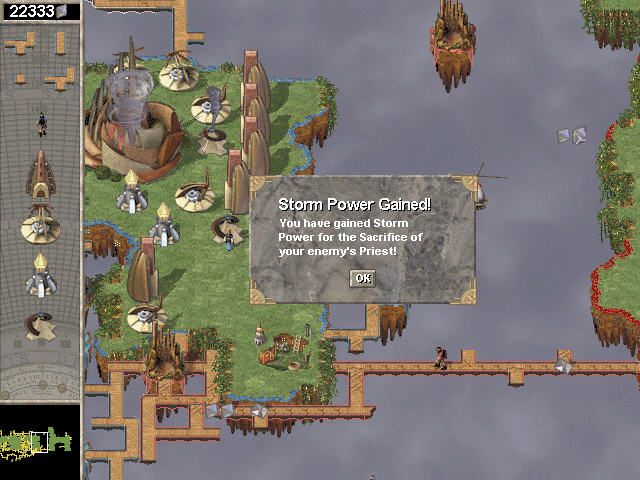 The final mission of the campaign puts me in the ridiculous position of being sandwiched between two huge opposing forces. The key to winning this one is to protect myself with a particular type of tower. These are invulnerable if attacked from one side so I can protect my buildings and slowly start to push the enemy back by building around the sides to attack his stronghold. This isn’t simple and I suffer plenty of setbacks before really getting on top. 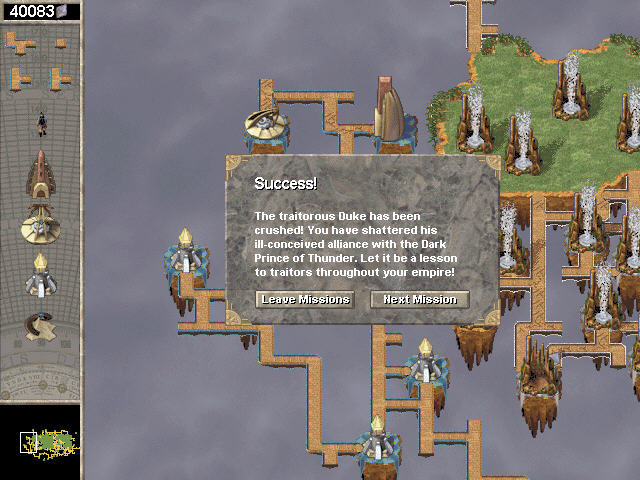 After about 30-40 minutes I manage to defeat both sides. This would have been longer but one of the enemy priests foolishly comes too near to my base and gets shot by my defences. This allows me to defeat the Eastern forces without ever mounting an attack on them. The only key to defeating an enemy is to capture and sacrifice the enemy priest. The sacrifice is fairly slow which led to a tense minute or two while the enemy frantically tried to break through my defences and rescue their priest.

I’ve certainly got a good idea for the gameplay in this now, although it would be very different against a human opponent. The biggest difference in this to any other RTS I’ve played is the lack of control over my units. I can’t tell them who to attack and the most powerful units are usually extremely inflexible with very narrow fields of fire. The units are always a tradeoff depending on what you are trying to achieve. Netstorm actually has a lot in common with tower defence games in some ways but is more frantic and I never have time to sit back and watch.

I’ve been extremely limited on what units I’m allowed to use in a single mission with maybe a choice of 4 or 5 each time. This reduces my available options but that isn’t to say these levels have been easy. I’m certainly not completing them on the first go and there is no saving allowed meaning that I have to restart from scratch each time I mess it up. This hasn’t been an issue so far though and I can’t say I’ve ever felt like I didn’t deserve to lose. You can tell fairly early on as a rule, if you are doing well and learn from your mistakes each time. It might take half an hour to actually finish off the opposition but the critical stages tend to be at the beginning.

With these lengthy levels, this isn’t going to be a game I’m going to finish quickly but I’m certainly enjoying it. It is one of those games which can eat up large amounts of time without me noticing it and you don’t want to start playing this if you have something you should be doing. The gameplay is far more strategic than Command and Conquer, although it is suffering the same failing of providing its challenge by putting you in impossible situations. This single player campaign is almost a puzzle game in that regard but I can imagine the multi-player games being extremely good fun and a serious challenge. I’m sure I would get pulverized if I were to play a veteran at this although I may give it a go when I get through with the single player campaigns.

It occurs to me that if I’d been playing this while I still had 60 games left to blog about, I’d be wanting to rush on to the next one and wouldn’t be enjoying it half as much. I don’t feel any need to hurry at this point and will probably take another couple of weeks to finish this off in my own time. This is no Knights Of Legend but it is a game that requires a reasonable amount of time for each session which means I can’t just jump into it when I have a spare 20 minutes.

I would have liked to see a stronger story to the missions but the gameplay is enough to keep my attention on its own. Netstorm isn’t something I would have bought or played if it wasn’t for this blog and is a good example of why I’m still doing this.