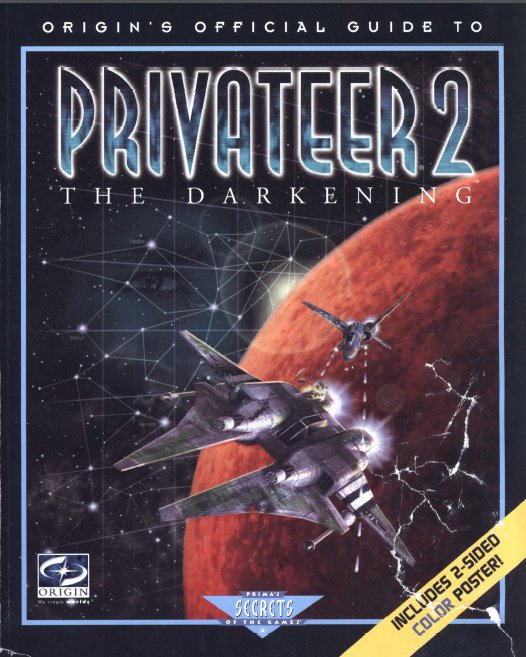 This was published by Prima in 1996. It starts off with a tour to the system with the backgrounds of all the various clans, planets, stations and the like. I’m assuming the text is taken straight from the game. Next it’s the more technical information such as how the random encounters work, gun and ship specs, etc.. This is all useful enough if you want to know how to spend your cash in the game.
There are sections dealing with trading and then combat tips. These have lots of tables of data but also some general advice including a return of the playtesters tip’s that were in some of the older books.
As usual, the largest section deals with the missions. The main plot is actually quite brief and a lot of it just involved flying to various places. This lets you know how it works but a lengthy guide isn’t really needed. There is also the same treatment given to all the other missions with cinematics in the game for anyone who wants to track them all down and beat them, although these other missions are basically just offered randomly. One thing I noticed here was that the missions only occur if you have the right CD in the drive. So you could finish the game and keep playing forever with CD 3 in the drive and never be offered anything on CD 2.
The bulletin board missions are also covered. Every single one of them, and this takes up around 100 pages. These missions are all fairly straightforward and this doesn’t seem like anything I could see most people making use of. There are no tips to completing them. It is just describing what you are up against which you will find out as soon as you fly the mission anyway. This looks to me like filling pages for the sake of it.
There is a short interview section at the end, which isn’t especially illuminating although it’s interesting to note that the casting for the game was an attempt to appeal to the various markets around Europe and also the USA by picking actors famous in each country.
The guide came with Prima’s customary pullout. This one had all the ships on one side and a map of the system on the other. As ever, this is all scanned in and available as a pdf in the downloads. The poster is a particularly bad effort on my part to join all the images together. A map of the system sounds like it could be the sort of thing I might have stuck on my wall as a young teen but it’s extremely dull unfortunately and the sort of thing I could knock together myself.
This guide covered the basics but most of it was tables of information I didn’t need to know or text taken straight from the game. It could have been done in far fewer pages, yet skimped on the interviews at the end. I thought we might get to hear from some of the cast at least. For a game that had such a strong visual style the book is surprisingly bland as well with most pages being straight text. There must have been a wealth of artwork that could have been drawn upon but not much of is in evidence here. This guide was adequate but by Origin’s standards I thought this it was fairly poor. I wouldn’t have been happy paying £16 for it back in 1996.