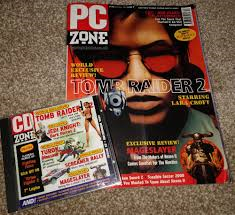 I’m sharing the love this Valentine’s day with a newly scanned PC Zone – issue #57 (December 1997). This one has plenty of games I remember but nothing really classic at least in my eyes. My highlights are a Carmageddon article plus an interview with Douglas Adams about Starship Titanic. There is also a review of Sid Meier’s Gettysburg which was playtested at Origin as I understand as well as a variant on the 3 page ad for Wing Commander Prophecy from issue #58. As always the pdf and CD image can be found at https://www.pixsoriginadventures.co.uk/PCZone

Also, I found a site (http://neil-black.co.uk/) with some of the floppy cover disks on it. The owner has kindly agreed to share these and will hopefully be providing some more in the future. I’m pained to say that while I have plenty of cover CD’s, all my floppy cover disks got thrown out years back and had probably been overwritten by then anyway. Most people probably did the same thing making the original disks quite hard to come by. I’d near enough given in on ever getting hold of any of them so it’s great to be able to fill in some of these gaps at long last. I’ll add the disks he’s done in with everything else over the weekend. Issue #56 should be forthcoming next week.