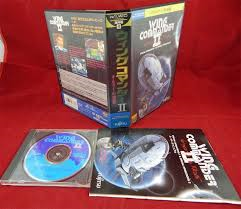 Wing Commander II was released for the FM Towns somewhat belatedly in 1995. Once again it got some cool new box art. Since I don’t strictly speaking own a copy of this one myself, the photo is from an Ebay auction where you could if you were so inclined buy it for the giveaway price of 400 Euros. I’m resorting to playing it from a burned CD instead. I’ve been looking forward to playing this one for a while now actually. WC1 received numerous ports and even a complete remake, most of which I’ve already played through on here. I haven’t played Wing Commander 2 on the other hand since blogging through it about 9 years back.

The Towns port of WC1 could be played on the base hardware (including the Marty console). WC2 needs to be installed to a hard disk however and needs a faster machine so Marty owners can forget about playing this one. The installation process is painfully slow from the single speed CD drive. I think I may prefer the pile of floppies it originally came on. Which one is actually quicker would be a close run thing. To be fair, this does include both the expansions right from the start making it the Towns equivalent of Wing Commander II Deluxe. 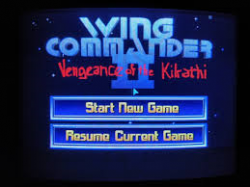 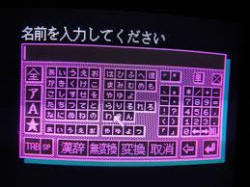 On starting the game, everything should look and sound very familiar for anyone who has played the PC original. Setting up my pilot proves to be a bit tricky as I’m presented with a screen of Japanese to contend with. I bash buttons randomly until it lets me through. Other than this, the graphics are straight from the PC version looking nice and crisp on the tiny screen. The music plays from the CD again but this time it’s literally just a recording of the MT-32 soundtrack. It may sound the same but this is a step back really as you have to wait for the CD to seek when changing track so it’s considerably less responsive than it might be. 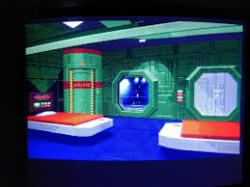 The speech has been re-recorded with Japanese actors and has new subtitles to match. The audio quality appears to be better than the PC provided you don’t object to the massive amount of reverb on everything. Giant metal spaceships probably would have a serious echo I suppose so I’ll give it the benefit of the doubt. I can’t comment on the acting but I would imagine that can only be an improvement also. These new samples do only replace the original speech so there isn’t full speech throughout like there was on the Sega CD WC1.

There are also new digital samples for all the sound effects. These are a mixed bag but I think I preferred the work that went into Wing Commander 1. Some of the sounds used here come across a bit cartoony for my liking with over the top swooshes for spaceships flying by and a particular offender being the breaking glass sound when spaceships crash into each other. There isn’t a whole lot else to say about the cinematics. The space combat is nearly as familiar with some reservations. 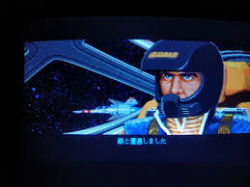 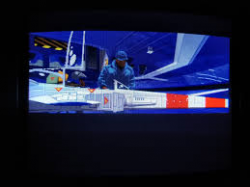 Firstly, there is no apparent support for the analog joystick that I used with WC1. Without a manual, I’m not 100% sure there isn’t a means to get it working but I had to revert to using the keyboard. I originally played WC2 like this back on the PC many years ago so it should still be playable except it didn’t respond in the way I recall. The Towns port uses a system where the pretend joystick is gradually moved further from the center as you hold down the cursor key for longer. In theory, this means you have accuracy but it comes at the expense of very slow movement when tracking spaceships which is what you spend most of your time doing. I really struggled with it. As I type this, I’m wondering if you could hold down shift to go straight to full turn on the PC version but I’ve not been back to check.

I seemed to run into issues when several keys were pressed at once. I have no idea whether this is a thing on the FM Towns but instead of turning diagonally I would often just move in one direction. Having to slowly build up turning speed again just rubs this in. Similarly, I struggled to control my speed while doing anything else. This is a particular problem on the Towns since for some reason the spaceships in this version just love to crash into each other. I was forever running straight into my enemies who would stop dead when I was right behind them. It wasn’t just me having this problem as the enemies frequently flew into each other or my wingman. Just staying out of the way could be a good tactic in this port. 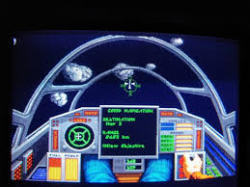 My final reservation is the speed of the game. I’m running this on a 486SX Towns – I originally played WC2 on a 386SX so I’d expect the Towns to be able to cope. Initially everything seemed OK until I got to the mission where you have to escort 2 Broadswords from the Concordia to blow up a Fralthi. The framerate in combat dropped as low as 1-2 FPS at a guess. I can only presume that some of the later more intense missions must be close to unplayable without a 486DX or better. With those sorts of specs, you could just about have been playing Wing Commander III instead on the PC.

I got about 7 missions in and decided I could have far more fun playing the PC version again so called it a day. There just isn’t much new to see in this particular port. It’s a curiosity but clearly not worth that Ebay asking price. The only arguable enhancement is the digital sound effects. If I had a faster machine and could figure out a method to use the joystick it could possibly compete with the PC original but as it stands I can’t recommend it. The only other Wing Commander to get a Towns port was Armada which was a straight up port which needed running directly from MS-DOS rather than Towns-OS as I recall. My Towns isn’t up to running that one so I’ll be passing it up.

It seems to me that Wing Commander didn’t get the best deal in terms of ports to the Towns. Love or hate them, the Ultima ports I’ve played were a whole lot more interesting. I do still have Ultima 4, 5 and 6 to revisit on this machine and will get around to them sooner or later despite the thought of all the Origin staff doing the voice acting in Ultima 6 filling me with dread.