One of the titles I remember most fondly from over a year of playing Origin games was Paul Neurath’s largely forgotten Space Rogue. Those memories are fairly cloudy at this point and it’s a game I’ve been looking for an excuse to revisit. After some searching that excuse arrived in the post recently in the form of Space Rogue for the FM-Towns:- 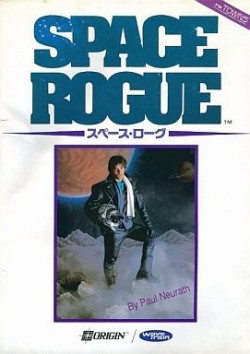 I only managed to find an unboxed CD, so I’ve had to borrow the cover image above. The photo may have looked dodgy on the regular cover but we get to see the whole thing here and realise it could have been worse. From reading through the IRC log of Chris Robert’s visit to the WC CIC birthday bash, it seems he wasn’t a fan of these cheesy cover photo’s Origin were using at the time either which is why they were lacking for Bad Blood and Times Of Lore.

I read an interview with Paul Neurath the other week where he said that Roberts played Space Rogue for several days straight and then came to him with loads of questions about how the 3D worked. He had been working on a fantasy game at the time but shortly afterward changed his mind and started on what would become Wing Commander. I’d love to know if Space Rogue really was the inspiration for Wing Commander and would have asked on Saturday morning if I’d not managed to sleep through the whole of Chris Roberts’ Q&A session.

Paul Neurath had already attempted a 3D space sim with his first game Deep Space : Operation Copernicus which was published in 1987 by Sir-Tech. That was arguably the first ever filled polygon game allowing 6 degrees of movement and is one of the games I’d like to have a go at for the blog at some point. Space Rogue took the concept further by trying to combine simulation and RPG elements into one game. These two genres weren’t truly merged however and it was more a case of swapping between gameplay styles. It still worked well enough that Neurath wanted to fuse these parts together into a more cohesive whole which is what led eventually to Ultima Underworld. If it can claim to have been the genesis of both Underworld and Wing Commander, it’s fair to say that for a game no one remembers Space Rogue made some big waves.

It was originally developed on the Apple II not long before Origin finally made the move over to PC as their primary platform. The PC version I played did support VGA but was restricted to PC speaker sound and there was certainly room for improvement from a technical standpoint which is one of the reasons I wanted to try the FM Towns version. After creating a virtual floppy to save the game, it ran perfectly in the Unz emulator. My hopes that it would largely be in English were dashed though. Flying and controlling the ship + the game menus are OK and this part of the game is playable. On landing however, all the conversations are in Japanese so I’m not going to be able to do any more than take this game for a quick spin.

The biggest change comes right at the start as the intro has been completely redone with new animation, graphics and sound. The in-game graphics are much closer to the DOS version being only marginally more colourful but the biggest improvement after the intro comes from the CD music. The original game had no music whatsoever and it helps the atmosphere no end having it here. Gameplay appears to be identical although I have to confess to struggling to control my ship and it needed some finesse to dock with the space station. I expect I’d soon get the hang of it and setting up a joystick instead of using the keyboard would certainly have helped. Initial impressions then are that this looks to be a good port, not a huge step up from the original but a definite improvement. I’ve put up a short clip below of the intro + a visit to a space station (apologies about the mouse pointer):-

All the CD music is available in mp3 format below:-

Not being able to play this game is entirely unfulfilling but on a brighter note it turns out that thanks to the efforts of R. Capowski, there is already a translation of the first Ultima Manga which I’d managed to never hear about. I guess I should have known to Google. I’ve not read it yet but intend to put that right shortly.