I’ve been hunting through Japanese auctions this last week or two, and one of the items I’ve managed to get hold of is an FM Towns version of Space Rogue. Space Rogue is a game I’ve been looking for an excuse to replay for ages and this will give just the reason when it arrives. While I’m waiting for that, here is a related item I acquired from Rhea Shelley 6 months back, the original press release for the more conventional versions of the game:- 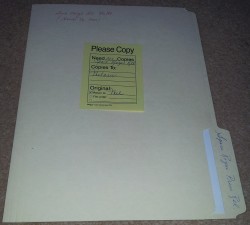 The phrase that caught my attention on here was “a multi-media sensation spawning the beginning of the Origin Cinematic Experience”. As much as I liked the game, I wouldn’t describe it as either cinematic or multi-media but standards were of course very different back then before being redefined by Wing Commander a year later. I did wonder if this might actually be a reference to Wing Commander which must have been in early development around this time. 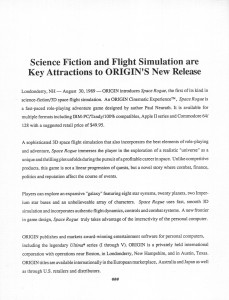 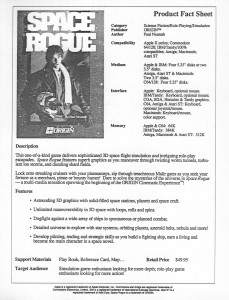