I nearly don’t notice it but a panel on the wall allows me to pick a permanent upgrade to my abilities. There is a whole raft of choices here but I go for a 33% bonus to wrench damage since I seem to be using the wrench more than anything else. I was the same in Bioshock. Ammo is seriously rare so far in this game and I simply don’t have any a lot of the time. I’m also running into new enemies such as a giant yellow robot. I run in close and give it a good wrenching and this works better than I would have expected although it does blow up with the last hit and I take a load of damage.

The area with the robot nets me an access card and I use to get into R & D. I’ve been sent in here looking for a guy called Watts who is allegedly still alive. I’m not actually expecting to find anyone alive as I remember them all dying just before I got there in SS1 but this guy manages to survive a few seconds at least and gives me the access code I need to attempt to restore power. This code gets me to maintenance access right back near where I started the game and this leads me down to a new level.

The new level is seriously radioactive and my first job is to try to fix this. This levels new enemy is a modified droid which sounds friendly but explodes the moment it gets anywhere near me. I’m still struggling for a strategy with these. I can blast them at distance but they take a good few shots. I really need some more ammo. 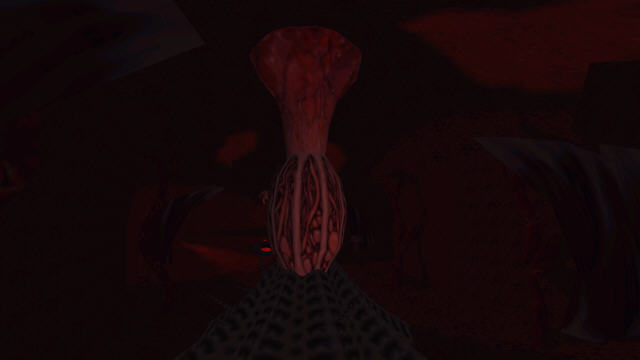 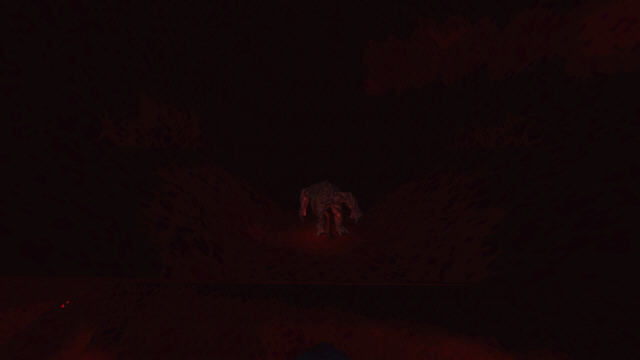 My search leads onto the cargo bays and I get a strange vision when I enter of a fleshy world and I’m asked why I don’t want to be a part of it. I really don’t know what to make of this but I’m sure I’ll find out more later. 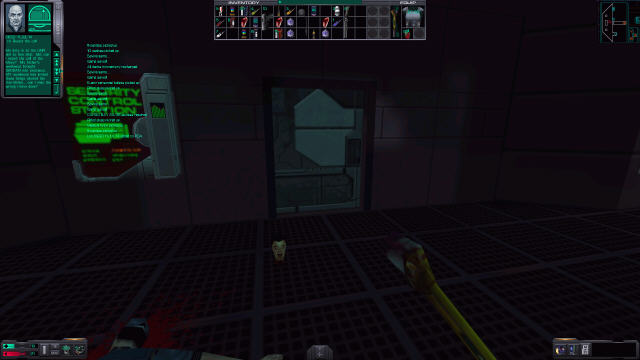 I gain access to the bridge of the ship from one of the cargo bays. The guy in charge is called Diego and is a descendant of the Diego in the original game. It looks as though he has been carrying on his work in some way. I also hear about an object picked up from a planet but I don’t know what it was. 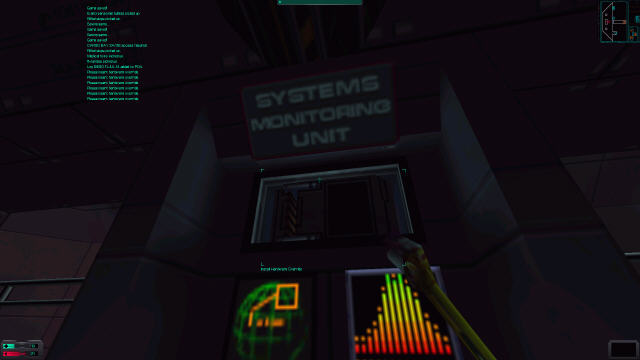 The bridge has a system monitoring unit which I could apparently attach some piece of hardware to if I had it. I expect that I’ll be back. 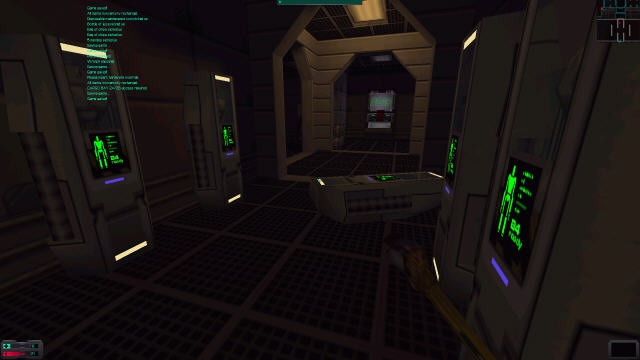 After a lot of wandering around I discover that one of the cargo bays to the South which I’d thought was a dead end can actually be reached by bashing in an upturned desk thats blocking the route. There is quite a lot of destructible scenery in SS2 which is something I need to bear in mind I guess as you don’t expect it in a game this old. This new bay contains loads of robots in storage. 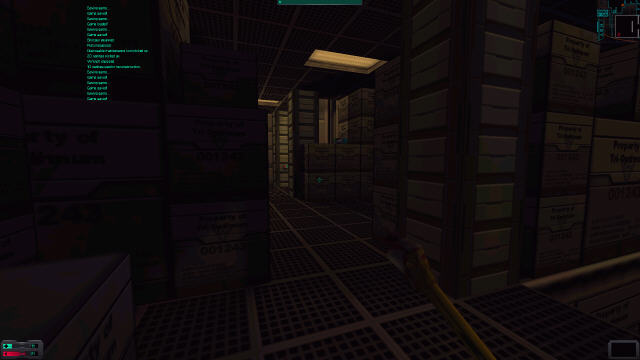 This cargo bay is pretty huge and spread over 3 levels which can be accessed with cargo lifts. Quite a few of the robots aren’t in storage and it takes me a while to work my way through them all. Eventually I clear the place out and somewhere along the way I pick up the access card I need to get into the northern cargo bays. 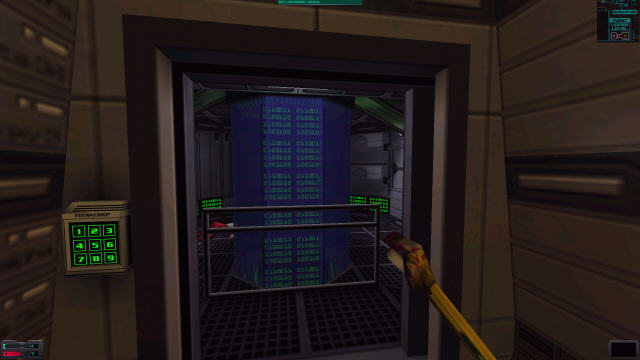 Searching the northern cargo bays nets me the keycode I need to get into engineering back on the radioactive level above. 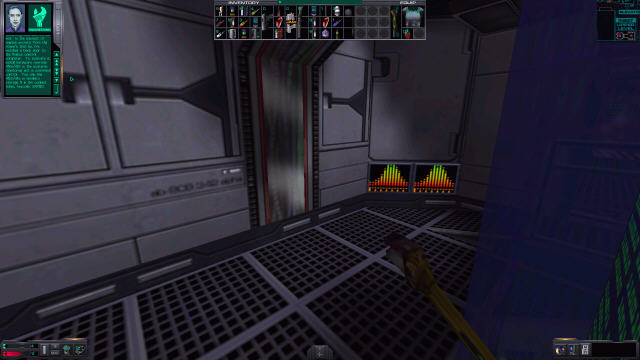 There is yet another code in here for another new area. 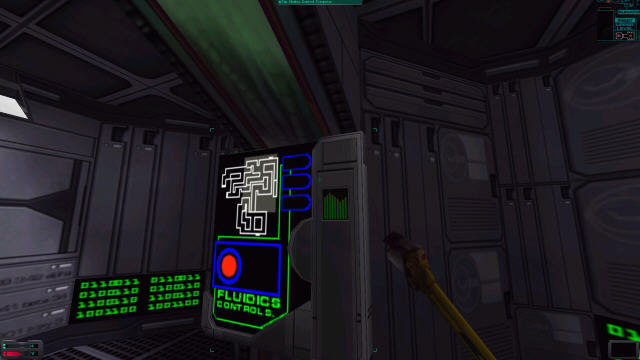 Apparently to get rid of the radiation I need to use the fluidics controls but Xerxes has already blocked these off so I’m told to look for an alternative.

I’m finding this game quite difficult to write about so far – I played for two hours last night and I’ve not got all that much to say here for all that. Either its the fact that I’m out of the habit after two months off or its the way the plot is being drip fed to me. There hasn’t been a lot of story yet, most of the time I’ve spent on this has been just exploring the ship attempting to gain access to new areas. There has been quite a bit of side story and there is easily enough there to keep my interest up but its hard to see where its going for now.

SS2 is clearly split into levels but not in the same way as SS1. Each level varies in size and it never really feels like I’m moving between independent levels (even though I am). I’ve been backwards and forwards so much between them all that it almost gives the impression of being one big map. I like both approaches for different reasons – this is more realistic but its easier to get confused and lost. There are enough little differences between this and SS1 for it not to feel like a rehash of the same thing. The big improvement to SS2 is the atmosphere generated by the game which is just excellent. This is mainly created by the audio which is amazing for a game of this age. The sound effects are clearly designed to create unease and just hearing the wet slaps of cyborgs wandering around is far creepier than it has any right to be. I partly blame my new headphones which completed my PC upgrade last week.

The other aspect is that all the enemies in this game are quite powerful and I can die very easily. In this sense SS2 doesn’t play like a FPS at all. Despite my implants, I’m definitely not an all powerful killing machine. From now on I’m going to concentrate on building up my physical stats and then move onto weapons and see if I can’t do something about that.