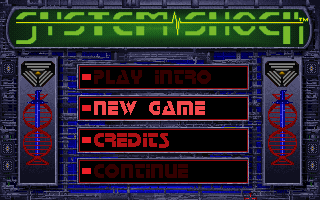 I got this demo from the November 1994 CD Gamer Cover CD. A quick google didn’t turn up anywhere to download it other than an abandonware site that expects you to register and presumably pay, so I’ve uploaded it to here.

This is the demo for the floppy version of the game and includes the entire first level, minus the intro sequence. There wasn’t room for a sound installation program (just how short on space were they?), so there are instructions in the readme for setting up the sound manually. The demo has the full choice of difficulty levels. I probably should have gone for easy, given that I’m not allowed to save at any point but I left everything on normal.

I’ve never actually played the floppy version of System Shock. It’s a game that made the transition to CD so flawlessly that it’s hard to believe it wasn’t designed for CD in the first place. I’m hard pushed to think of another game that managed the transition as well. 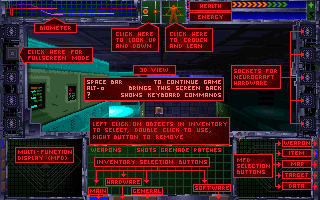 Going back and playing the floppy version now, the obvious differences are the lack of speech and no option for SVGA graphics. Both of these do take away from the game but I was soon hooked once again despite this. The controls are the same confusing mess but I got the hang of them far more quickly second time around, and it’s one of those cases where they are intimidating at first but actually work quite well when you have them learnt. 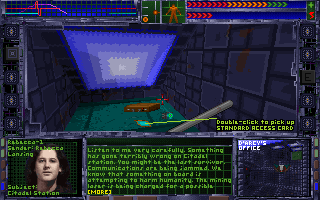 An entire level takes some playing through. I remember the layout vaguely but it’s not like Underworld where I know where every item is. I made my way slowly through and must have explored nearly all of it before I found myself being gunned down in seconds by an unseen opponent. I’d got all the access cards to get off the level and must have played for going on an hour to get that far. I should probably have headed straight for the exit to see what happened in hindsight. 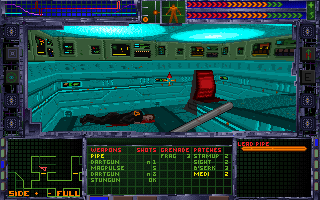 I can’t say I spotted any differences to the final game on the way, although the readme mentions a reduced number of opposition and textures. This is a huge demo and should be enough to convince anyone to give the game a go even if they don’t make it all the way through. For some reason, it didn’t convince me at the time. Maybe the controls put me off, or more likely my PC simply wasn’t quick enough. I was definitely expecting another Underworld and didn’t get it which was also an issue. Whatever the reasons, I never actually played System Shock until a couple of years back at which point it became one of my favourite games. Having got this far in the demo, I’m strongly tempted to go back and play through the whole thing again. I would seriously enjoy having another run through, but I’ll leave it for now and have a look at the Wings Of Glory demo instead.