By far the most I’ve ever had to pay for any of the books on this site was the official System Shock guide which is apparently rare enough and in enough demand to put prices through the roof. It was also the only official Origin guide I was missing as I recall and I wasn’t going to be put off. While I was hunting for that at a half-decent price, I ran into another unofficial guide written by Bernee Yee, System Shock – Strategies and Secrets, which by contrast cost next to nothing despite being twice the size:- 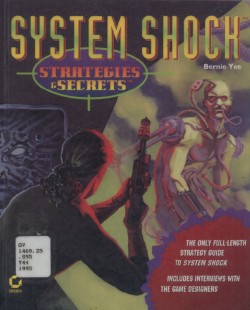 This unofficial guide was published by Sysex in 1995, and clocks in at just over 200 pages. It’s largely written from the point of view of a character construct A.I. that the hacker acquired before being put to sleep for 6 months, although this pretence is largely dropped by the time it gets to the walkthrough stages. The guide is full of original artwork of varying quality with most of the pages being spent on the walkthrough. It also has all the other sections you would expect on the likes of enemies, weapons, general strategies etc.

The original System Shock guide always did seem a little small. The maps are larger and clearer here and the extra pages give a little more room to flesh things out with this guide acting as a replacement for the manuals to some extent. It hardly makes full use of all those pages though so it’s a close run thing as to which is the better. What sways it for me is a brief interview with Doug Church right at the end which is well worth a read for anyone interested in the game.

The pdf is a little on the unnecessarily large side but the guide is now scanned and available with all the others either on the downloads page or from here.