New posts on here are like hens teeth these days but I have promised myself that I’ll try to post something at least once a week so I’ll put in a token effort at least. I was supposed to be playing Ultima 7 SNES by now and you can blame Skyrim for distracting me from that. I picked it up in the Steam Xmas sales and it’s proved to be the first Elder Scrolls game that has held my interest after the early stages. Whenever I manage to finish it, I’ll be starting Ultima 7.

Prior to that I’ve been playing a few of the games I backed in the early Kickstarter frenzy some of which are finally starting to deliver. Broken Age was decent but a slight let down I thought. I’ve definitely played better adventure games that have come out in recent years on smaller budgets and it wasn’t quite what I expected from a Tim Schafer game. My favourite game that I backed to come out of Kickstarter so far has been Spud’s Quest which is a platform adventure in the style of the Dizzy games. It might not be as appreciated by those who don’t have any fond memories for the Dizzy series but you can’t go that far wrong at $8.00. Also on the Kickstarter front my Quest For Glory/Hero U meep arrived and set up home this week:- 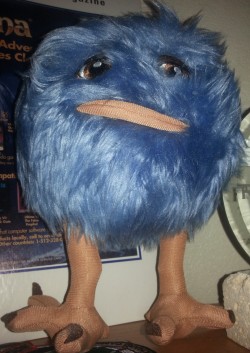 To get to the point of this post, I thought I’d dig out another Origin press release and the first I found was for Windwalker from September 1989. I get the impression that Origin were targeting the more mature gamer with this taking quite a serious tone and describing the game as both a physical and intellectual challenge (presumably referring to the arcade fighting sections and RPG components):- 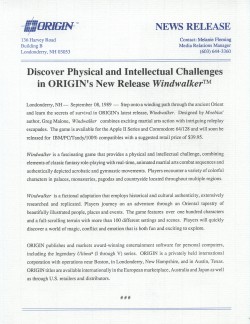 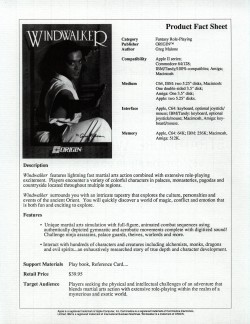