It’s two years since the last one so it must be time for another look at the games rooms. It has to be said that game playing and collecting has taken a very backward step to real life in the last couple of years and this collection will be much the same as the last time I did this. The biggest change is the location itself now that I’ve moved into a more sizable house.

Speaking of which having recently gone through it myself, I’d be genuinely interested in how fellow collectors get on when moving home. I would guess that 75% of my time packing/unpacking was spent dealing with the collection adding days/weeks of work not to mention doubling my moving costs. The final house I chose was influenced hugely by where I was going to put all this stuff with the large attic room (see part 2) being one of the main selling points. Even before then, you have the interesting experience of trying to sell a house where a third of the rooms are crammed to the rafters with gaming ephemera. During the move I had to dismantle and then rebuild dozens of bookcases, cope with removal men cursing about having to carry massively heavy boxes crammed full of magazines down/up flights of stairs, and sort through literally hundreds of tangled cables when putting everything back together. All this can make you question the notion of having a collection in the first place. Of course, I’m starting to enjoy it all now everything is sorted out and I have some time for myself again. It’s fair to say it’s a lifestyle choice when a collection gets beyond a certain size. I wouldn’t have it any other way but I really, really hope I’m not moving again for a good while now. 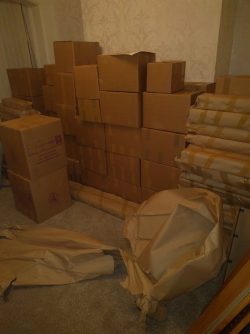 This post will cover the office/pc games room which is primarily where the piles of big box PC games are all stored. As should be clear, I can’t get enough of big box PC games which are the PC gamer’s equivalent of collecting vinyl except even less efficient in how much space they take up. Back at the end of November just after moving this room looked something like the above with a large pile of boxes and very little space to actually unpack anything.

This is the mostly finished version in dodgy panorama. Google Photos can’t cope with curved window bays by the looks of it. I still have piles of games on top of all the bookcases but there is quite a bit of room to expand compared to what I used to have. Not having to duck in the back half of the room is certainly nice also. It has to be said that the games aren’t anywhere near as organised as they used to be but I have put a little effort into restoring some order to things since the move. I’ll get around to the rest eventually but it’s seriously low priority. 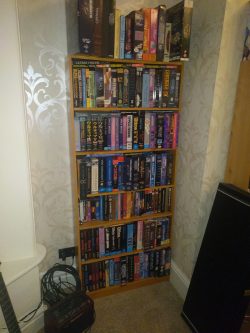 Starting by the window, this is most of the Origin collection which should contain at least one copy of every game (assuming they haven’t strayed to another shelf). The Might and Magic series is up top. It’s a North facing window so I should be reasonably safe from sun damage – this is definitely something to watch out for. 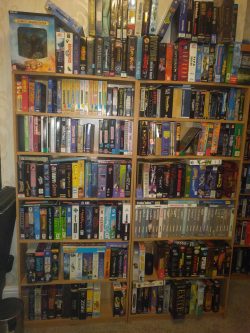 The next two cases are far more random. The Bullfrog and Infocom collections are in here along with the SSI gold box games but most of this hasn’t been sorted yet. 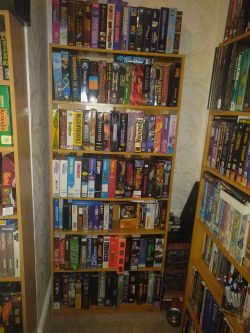 This corner is even less organised with a bit of a Westwood section + a Legend Entertainment shelf among the randomness. 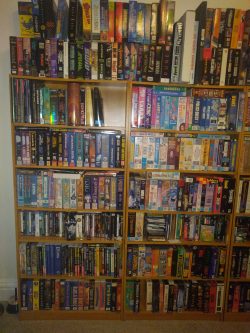 This section is more orderly with a couple of shelves of Lucasarts, a load of the larger clue books and the Alone In The Dark/Call Of Cthulu series. 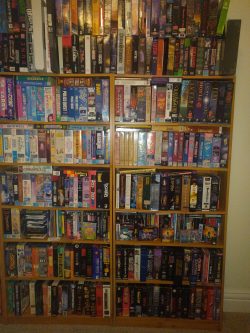 Finally all my Sierra games are in here. They were one of the most prolific PC game publishers and this is the largest section with near enough all the AGI/SCI games included. There is a Star Trek games section of which I’ve still played about one of them and finally a load of FPS’s.

At a rough guess, I’ve finished maybe 1/3 of these games over nearly 30 years of PC gaming. Most of the rest may never have even been played which is where this blog is supposed to come in. It worked for the Origin games but how many of the rest of these I’ll ever finish is yet to be seen. 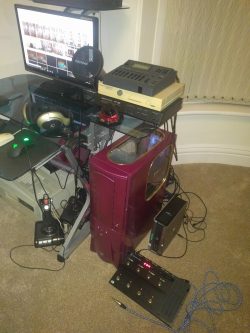 My old computer desk looks unnecessarily small in this room and might get replaced at some point. What I do like about it, is that it houses a 19″ CRT underneath the glass which I use with my old games and a more modern LCD above for everything else. This sort of desk was briefly around in the days of CRT’s as it was allegedly easier to look down through the desk like reading a book. Pretty much everyone hated the design but I kind of liked it and it works well for housing two monitors in a small space.

The giant purple box is my regular PC which is showing its age these days and due for a major upgrade at some point. The white box under the desk houses a 400Mhz Pentium II which dual boots DOS/Windows 98. By fiddling around with cache settings this serves for running nearly all old DOS games. I’ve some alternative machines for the really old stuff but they are in part 2. There is an MT-32, CM-64, and SC-155 piled up to provide the audio for all these old games with an extremely complicated wiring arrangement whereby the midi from both PC’s gets fed through these with the output from all soundcards ending up coming out of my main PC headphones or through the VFX-1 if I have it connected. I may do a detailed post on the setup of this machine at some point but it would definitely need a whole post to itself.

There aren’t any pictures up on the walls in here as of yet so it still looks a little bare. I’ll probably add a few of the smaller ones but this room is on the ground floor so I’d like to keep it normal-ish. As it stands I can just about get away with it as a “library” room. I am definitely going to put some pictures up in the attic so I’ll see what I have left over when I finish. 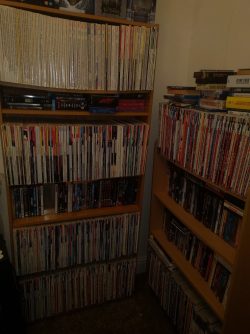 As a minor aside, the old PC magazines have been moved to what is currently my storage/dumping room along with a load of blu-rays/DVD’s. They didn’t cost much but the magazines are one of my favourite parts of the collection these days. I really like being able to (fairly) quickly look up contemporary reviews on old games when I play them. The only problem is that PC gaming mags didn’t start until the 90’s in the UK so I’ve nothing much from the 80’s.

That covers most of the PC gaming stuff. The old computers/consoles are in the attic which I’ll take a look at in part 2.