In this second post, I’ll take a very quick look through the attic gaming room. This is where all my old consoles and computers live and is a major improvement over the old room where I simply didn’t have enough space for all this stuff. Everything is set up and working although I do still need to tidy up and label all the SCART switches which are still strewn about the place. 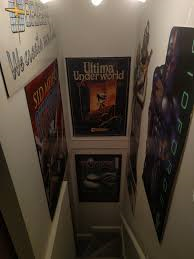 Starting at the stairs, I was wondering where I was going to put all the larger posters since I don’t really have that much wall real estate so the stairwell is now a very miniature gallery of sorts with some of the standups, posters + my giant Origin sign. 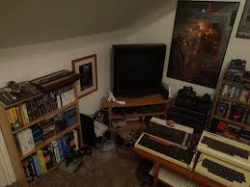 I’ll gloss over the bookcases which tend to contain all the games that came with each machine and concentrate on the hardware. This left hand corner has a giant Bang & Olufsen TV I picked up cheap last year which I thought would be perfect for gaming. I was only half right as some of the machines refuse to work with it but the majority of the old consoles are plugged into this via a load of SCART switches. There is a serious mess of power extensions and PSU’s piled up behind to power all the consoles. 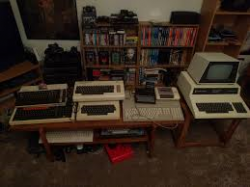 The computers on the desk in front are all connected to the same TV (apart from the Commodore PET). Most of these have featured on the blog at some point already but I really should have a look at some of Origin’s Atari 8 bit ports one of these days. My old hifi is in the back acting as an oversized cassette deck for the rare occasions I want to load something from tape. 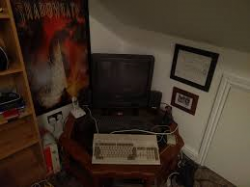 The right hand corner has my old TV and the machines that refuse to work with the B&O TV. The Amiga and Spectrum are the plugged into here along with an MSX2, Fairchild Channel F and a Videopac 7000. The MSX2 was another machine that saw loads of Origin ports which I should try out on the blog one of these days. 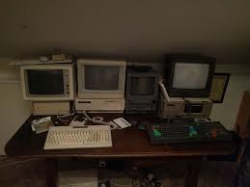 Probably my favourite section next which has all the machines that use their own monitors. It’s a little strange in that the monitor for any given computer is usually to the left of the machine in question to keep space used to a minimum. The IIGS is actually connected the nearest TV via a homemade SCART cable, with the CGA monitor on top used by the Tandy TX. The Tandy has a composite monitor sat on it with my CGA 286 on the far right driving it. That has the Amstrad CPC monitor on it. The FM Towns in the middle had to sit on the floor in the last hose but now finds some deserved desk space. There isn’t enough space for all those keyboards so they have to get shuffled around a bit depending which system is being used. 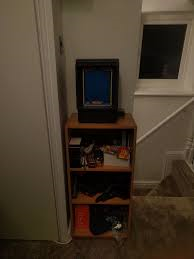 The magazine cover disks are hiding out of sight in this little alcove to the right. Finally the Vectrex gets a spot by the stairs on top of the bookcase with all the spare controllers and other bits and pieces.

Now that I have the room for all of these, what is desperately missing is some seating. I had a big sofa in the last room but would need to have demolished part of the new kitchen in my last house to get the thing out again so I had to leave it behind. Given how strewn about all of these machines are, I need something more mobile for in here anyway. All I have right now is my old office chair which is OK as long as it’s just me but not so great for anything multiplayer.

That’s the collection as it stands for now. I’ve got jobs to pay for on the house which will stop it expanding further any time soon and I’m at the stage where there is very little I want any more anyway. Too many of these machines have been barely touched as it is. The definite exception is that I don’t have an Apple Mac anywhere in the collection and really should so I hope to remedy that at some point. I’ve also got a Spectrum Next arriving whenever they get released. In the meanwhile, I’ll see if I can’t play a few more of the games I’ve been meaning to get around to for years.