The pronunciation of the title hasn’t changed from the last post but the spelling has for what seems like a appropriate game to take a look at next. The Horde is an action/strategy game published in 1994 by Crystal Dynamics originally for the 3DO but later ported to the PC and Saturn. It’s a game I remember reasonably fondly from renting it from my local library but we’ll have to see how it stands up these days. 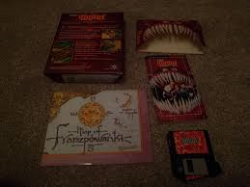 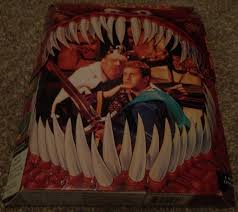 The box is certainly one of the more unique I’ve seen with a pull off top section with cut out teeth. The FMV laden nature of the game (it was for the 3DO after all) is apparent from the cover with the player character Chauncey (Kirk Cameron) pictured protecting his King inside the gaping jaws. According to the box, Cameron was on Growing Pains prior to this game apparently which doesn’t mean a thing to me but he was golden globe nominated twice so I’m guessing he was more famous on the other side of the pond.

This one is the floppy release which misses some of the point of the game so I’m going to be playing the 3DO version instead. This version has the FMV replaced with some static shots instead and doesn’t feature the CD soundtrack either. There was a PC CD release which had smaller FMV than on the 3DO but was otherwise more or less the same game. Like many games of the era, the box comes with an entirely unnecessary paper map which is also shown during the game. 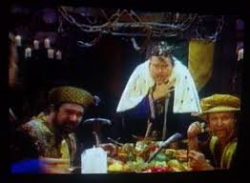 The manual and FMV intro lay out the plot in which our hapless hero Chauncey was abandoned by his parents as a child, raised by a friendly herd of cows and has worked his way up to serve in the kitchens of the King. During the introduction a banquet is being held in which the evil arch chancellor (who is actually called such in the manual) is regaling everyone with a tail apparently so amusing that the King nearly chokes to death laughing. Chauncey steps in to save the day and is rewarded by being knighted by the King much to the chagrin of the arch chancellor who had initially wanted to kill him for assault. Chauncey is knighted, given the King’s old sword which he can barely lift and awarded the deeds to the Shinto Plains where he now has to go and protect the land from the evil horde.

The FMV in this title certainly embraces the cheese factor but has higher production values than most of these games did at the time. It’s only there as a framing device rather than being integrated into the gameplay and serves the purpose quite well. FMV always worked well as the carrot to keep me moving forward in 90’s games like this even if plenty of other people skipped it.

The interactive sections contrast to the FMV being very cartoony (in a 90’s pre rendered 3D way). The game plays out in isometric 3D with two distinct stages of gameplay. In this first stage, I get to spend any money I have building, planting or transforming the landscape around the village I’m now protecting. I don’t have many options open at the start but can plant trees, dig out ground to extend waterways, remove trees, etc. I can buy cows which will return money but are a favourite food for the horde, build fences to slow down the horde or spiky pits to kill them off. Finally I can end this stage and advance to the next season (provided I can fight off the horde inbetween). For now those are all my options but I’ll get to buy more later. 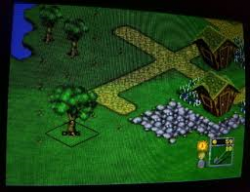 Being green pays in this game and I remember well enough that the secret to beating it is planting huge forests of trees. Each sapling I plant has a chance of growing into a full size tree at the start of the next stage. These can be dug up returning 5 gold for my 1 gold investment. All the others can be dug up again at the very end to get my 1 gold back before I advance to the next map. There is a limit on the number of trees I’m allowed but each turn is timed so managing the giant forest fills up an entire turn on its own. The trick if I recall right is to drum up so much wealth in these early levels that you just need to worry about staying alive at the end of the game. 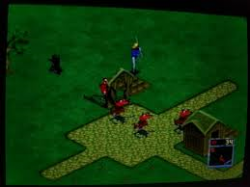 Once this management/strategy stage is out of the way, I get attacked by a predetermined and ravenous horde of bright red critters in an arcade stage. These guys spawn at various sides of the map and make their way to my village eating crops, breaking fences and swallowing whole any villagers they can sink their teeth into. I have to run around killing them all guided by an all too small mini map. I can hear them swimming or knocking things down which offers a slight clue as to their location but half the job is finding them.

Later in the game, I’ll have various objects available to help but right now I just have to take out the juvenile hordlings with the King’s sword. Using this swings me round in a circle hitting anything close enough. I have to be careful not to get too close and take damage of course. Swing too often and you get too dizzy to move for a couple of seconds. During all of this the villagers are hiding in their homes. Hordlings will try to knock these down if they get near enough. If any villagers do get eaten, there is a brief window where an engorged hordling will be sitting on the ground and if I kill it in time a dazed villager pops out of the remains. 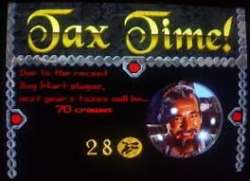 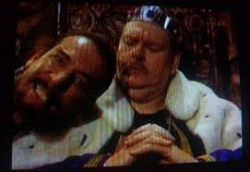 If you don’t save any of the villagers at all, then the game is over and it’s back to working in the kitchens. Succeed and you have to play one stage for each season of the year at which point the chancellor demands his taxes. 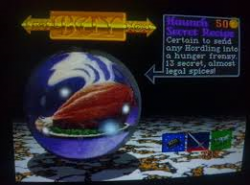 You get to save your game at the end of each year can buy some new gear if you have the funds available. The options available are things like stone walls, food which acts as a lure for the horde, bombs, knights to fight for you and a teleportation ring. As far as I recall, there are 3 years for each land and 5 different lands to get through. 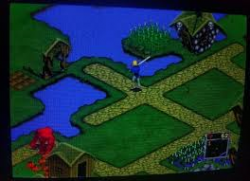 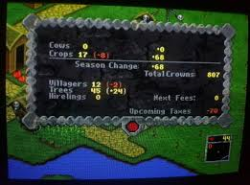 That is basically the whole game but it will get a whole lot harder. As you progress the village gets bigger and harder to defend and the enemies tend to increase in number. New varieties of creature start to appear. First are some hound-like hordlings who still die in one hit but dash around at ridiculous speeds. Far more troublesome are these guardian like goliaths who take 9 hits to kill off and merely have to touch a building to destroy it. I ran into one of these once too often on the final season of year 3 in my first session on the game. The bomb powerup I didn’t buy looks like it might have been a good idea at this stage.
So far, I can’t say much strategy has been involved. All I’ve done is plant lots of trees and relied on being able to stop the horde without the aid of any traps or protection. I’m all for a gentle start to a game anyway and will be finding things much tougher before the end.