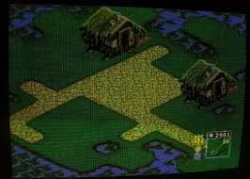 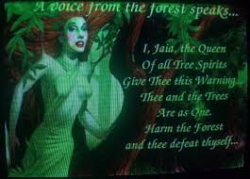 Having delved further, I’m coming to the conclusion that there is a lot more to The Horde than I recalled. I went back and finished off the Shimto Plains level and then got sent to the tree realms of Alburga. This is a highly wooded area but I’m warned early on that the trees contain spirits and I shouldn’t cut them down. Indeed doing so knocks chunks off my health thereby ruining my strategy of using loads of trees. 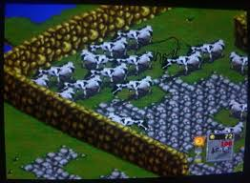 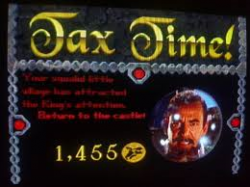 So instead to raise money I turn to cows. These cost 100 gp but return 25 gp for each season of grazing. The snag is that the horde will eat them up given opportunity which could get seriously expensive. I counter this by building a huge wall and placing them all inside. This is all well and good except these giant herds much their way through all the grass creating rocky ground that they then can’t graze on so I have to move them all about after each season. It’s well worth it as the returns are much better than they were for trees provided I can afford all the cows in the first place. There is a real knock on effect in this game. If you don’t earn enough cash in those early levels, you are going to struggle later on. I know I could have played those better in hindsight and am hoping I did well enough not to hit a brick wall in later levels.

Another bit of complexity I’d forgotten about is that you randomly get news reports halfway through some years which have effects on the game such as hot weather affecting crops, the tax collectors going missing so you don’t have to pay for a year and the like. These all get little FMV scenes to announce them. It’s a nice touch possibly adding replay value but not hugely affecting gameplay.

Finally some of the lands have unique enemies. The ones here are sneaky little thief hordlings that hide in trees, shoot at me and usually run away at speed when I get close to them. This level also introduced wizard hordlings who can teleport around. Thankfully, these are in short supply so my cows remained safe. 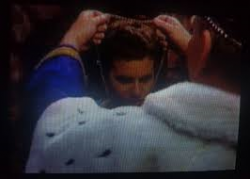 I actually had to play 4 years to get through the second map. Apparently this increases with each location meaning I’ll have to do 7 years in the final world. Chauncey should be about ready to keel over by the end of this game but they clearly live longer or have very short seasons wherever this is set. 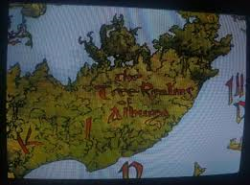 The King awards me with a new title and more deeds, this time for a swampy land where I have to plant trees to reclaim land from the swamp. The unique enemies here are alligators who swim around the swamp at great speed but aren’t much use on the ground. All the more incentive to claim back the land with trees. So far I’ve only been attacked from the East meaning I can have a huge herd of cows to the West happily grazing in the swamp. At some point I’m sure I’ll need to move them.

This is actually a pretty nice little game so far. It came across as simplistic initially but there is some real depth to it and variation in the levels. It’s highly unusual to have no penalties for removing anything from the map which arguably makes proceedings less strategic. Any wall, tree, cow, etc.. that I place on the map can be removed at any point for a full refund. It’s seemingly vital to exploit this right before moving to the next map as nothing you have bought will carry over leaving you potentially penniless at the start of a new level. This looks like something of an oversight and maybe isn’t how I’m supposed to play. I’ll stick with whatever works either way.