I didn’t get all that far into The Legacy in part 1. The wealth of options on how to approach the game kept sending me off in directions my character wasn’t able to cope with. I’d eventually decided to work my way up the house and was making steady progress exploring the second floor.

Today starts off with a simple door puzzle where I have to go through several numbered doors in ascending order to unlock another door in the middle of the level that has a knocking sound coming from it. Behind the locked door is another NPC is the shape of PI Dee Kirby who isn’t all that helpful in truth not telling me anything I haven’t already figured out. She leaves me when we are done talking with the intention to somehow leave the mansion. 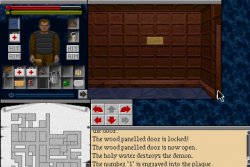 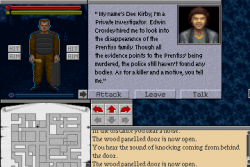 That just about finishes off the second floor so I head up to floor 3. Just when you think the house can’t get any stranger, this whole level is an asylum complete with my last remaining relative who tries to butcher me with an axe. This encounter is my abiding memory of playing the game from years back as it truly creeped me out at the time. It’s mainly the laughing my aunt is doing while trying to run that axe through me. The effect is considerably lessened with the passing of time but it’s still not what you would call pleasant. She leaves behind her axe and blood stained straight jacket which I’ll be needing later in the level to pretend to be her so I can get through an invisible barrier.

I’ll later learn that the asylum was used to provide victims for the dark gods in the lower levels of the house which at least partially explains its presence. 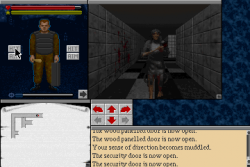 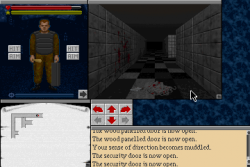 The exit to level 4 is guarded by one of the uglier monsters ever to grace an RPG and these guys are all over the asylum. They don’t chase after me at least and don’t have a range attack but I’m really not up to fighting them at close range yet. 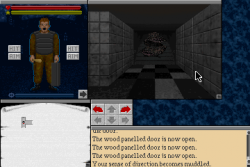 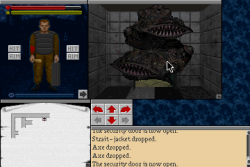 While exploring the asylum, I happen across a green gem which is just what I need for a puzzle right back in the entrance hallway where a painting had a conspicuous hole where the jewel in a pendant should have been. Sure enough placing the gem destroys the painting (begging the question how anyone ever used this in the past) revealing a door behind it. That takes me through to a room that could be straight out of Hellraiser with swinging chains and body parts everywhere. I can walk through the portal in the middle to get teleported elsewhere but have to time this to avoid the chains. 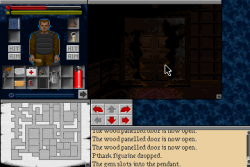 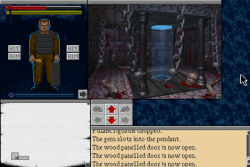 This takes me to an Egyptian temple level. I fail to get very far here running into lots of locked doors. I do learn that a dark cult were doing something nefarious here and run into one of them in his natty suit. Since I’m not getting anywhere here I decide to come back later. 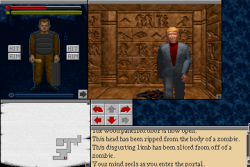 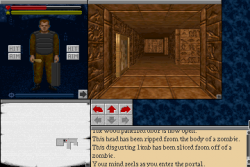 I still don’t fancy fighting my way past the two headed thing on level 3 so instead I try one more set of steps from the ground floor of the house which lead to a tomb level. The first thing I run into here is a gun toting zombie who I defeat with hit and run attacks dodging out of the way of his formidable shotgun blasts each time. The main foe down here after him are skeletons which spring back to life every time you walk over them. They are reasonably easy to defeat but do start to grind my health down after a bit.

I don’t find much else of interest other than a temple complete with organ. Using some sheet music I found near the start of the game, the window smashes revealing a swirling portal. Foolishly I head into this. 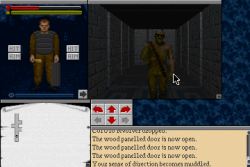 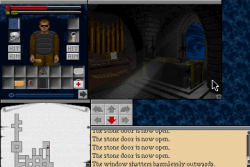 This leads to the ethereal plane which looks a whole lot different to Ultima Underworld but isn’t any easier to navigate. This one is a swirling blue vortex with invisible boundaries and precious little in the way of landmarks. It is absolutely swarming with monsters including the jellyfish on the right who I’ll learn later is one of the dark triumvirate of gods round these parts. It throws endless spells at me and I run away as quick as possible. The cubes are teleporters to various parts of the house and this level could be used at a shortcut if you can manage to learn where everything is I suppose. Most of the portals need opening up on the other side before they will work though. 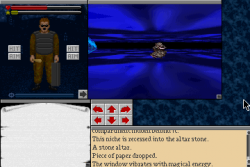 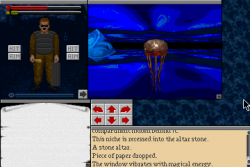 Once again, I’m unsure where to go next so I head for level 3 and find a load of rooms that I missed first time around. The place is populated with fire spawn who are invulnerable to any conventional weapons I’m carrying around right now but can be dispatched with one or two blasts from a fire extinguisher. 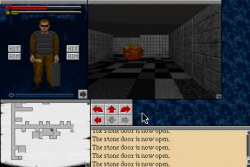 I manage to get some more of the locked doors open and explore the rest of the level. The most notable encounter is with a face bulging out of the wall in a padded cell. Whoever it is wants me to rescue them from the ethereal plane. I didn’t enjoy my first trip there much so I’ll hold off on that particular request for now. 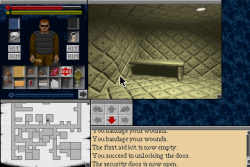 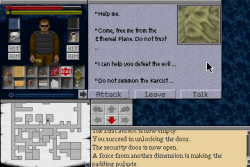 Instead, I head for the top floor which is the museum, kind of like the top floor of my house now I think about it although on slightly different scales. Nearly all the best items in the game will be found up here although not necessarily on this first visit. I also get to meet the bad guys as there are paintings of the dark gods starting with Belthegor on the bottom left. I’ll need to defeat this particular god at the end of the game. Right now, I’m having enough trouble with the crawling green slimes and pink crawling frog like things on this level. 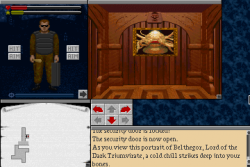 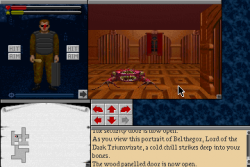 The museum has lots of plinths with all sorts of goodies on that will help when fighting the denizens of the Winthrop estate. Unfortunately for me most of them aren’t immediately grabbable and I have to replace the missing plaque on each plinth before I can pick them up. The only plaque I’ve found so far is a for a shuriken so I grab that while I’m here and then fail to use it throughout the rest of the game so I’m not so sure how effective it would have been. 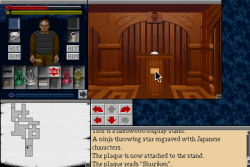 I find paintings of the rest of the triumvirate with Alberoth on the left and the nameless master of the void on the right. Alberoth hangs around in 3 locations simultaneously on one of the basement levels blocking access until I complete a puzzle much, much later on in the game. 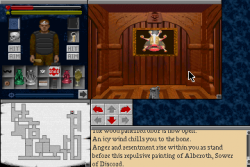 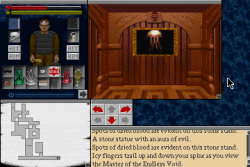 I run into another relative which is becoming a common experience considering I’m the last surviving member of the family. This time its Carl Winthrop who wants me to summon the Karcist in the temple. This probably isn’t a good idea as near enough every word this guy tells me is a lie. I’ll learn much later that the Karcist is the relative that started this whole mess 300 years ago but giving their soul to the dark gods. Carl Winthrop vanishes as soon as we are done talking. 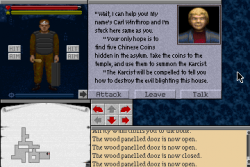 I find a room with plinths for 3 statues and I know from various scraps of paper that I can banish all the pink frog-things from the level by placing the appropriate statues on each plinth and casting a fireball spell at them. Casting the fireball spell proves to be the trickiest part of this and I have to devote a load of experience to the spell before casting starts to work. 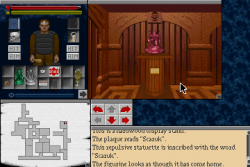 At the northeast corner of the level is another entrance to the void. I decide to take the plunge and this time find Charles Wenlock (or at least his astral projection) walking around. He is a magician of sorts who was trying to banish the evil from the house and is by far the most helpful person in this whole game. He gives me some crystal glasses to help me find a path through the void (another item I never used now I think about it), teaches me a new spell and also give me the advice that I’ll need to fashion a talisman from a meteorite fragment in the room of skulls in order to defeat Belthegor. 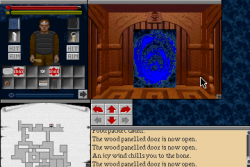 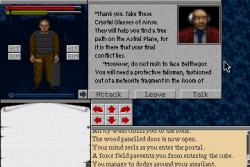 My only choice at this point appears to be to head down into the basement of the house again. When I attempt to go to the second basement level, sure enough Alberoth is waiting for me looking even less welcoming than in his picture. I’m completely unable to dodge round him but I have found clues about him disappearing at a certain star alignment. 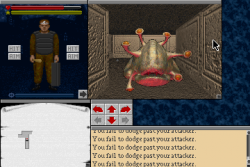 It’s fair to say I made a whole lot more progress in part 2 although playing this game does feel like stumbling around in the dark at times. I kept going back and forth trying to figure out which direction to strike out in. The story in the game is extremely sparse with only a minimum of guidance. Near enough every little clue you do find is needed to figure out the puzzles. Keeping all the screenshots for blogging has certainly proved extremely useful.

Part 3 will see me to the end of the game and should be coming around a whole lot more quickly than part 2. It’s not the way I usually do things but I was enjoying playing this enough that I ended up finishing the game instead of writing up this post.