I’ve just finished adding in all the cover disks from the recent donation. It’s plugged most of the gaps but there are still a good number of cover disks missing. I’ve drawn up a list of all the issues with missing disks which below. This list isn’t exhaustive as there was overlap between floppy/CD issues and CD/DVD issues where they were released in both formats. I’ll consider my work done if I ever get a set of one or the other for every issue but if you have any of the early CD’s/DVD’s that are missing but not on the list, please let me know and I’ll add them as well.

One thing I’ve noticed with web hosting is that while the price never changes once you take out a server, neither do the specs. It’s been a few years now and I can get a quicker server with twice the disk space for less money so the site has been moved yet again. That means loads of room for the ever growing PC Zone archive. Everything should be as it was although it will take a while for the DNS to move over to the new IP. As ever please let me know if you spot anything that is missing or not working.

There has been a glaring Apple Macintosh shaped hole in my collection for years now. I’ve always been put off taking the plunge by the ever dwindling amount of space, coupled with my complete lack of knowledge of everything Macintosh. The latest Ebay voucher proved too tempting though so I’m starting the new year with a new toy, an Apple iBook G3.

This thing would have cost around $1500 back in 2001 (price being a large factor in my Apple dislike), but to be fair it’s holding up remarkably well after all these years so maybe that price tag was somewhat justified. With a clock speed of 500 Mhz, it’s a bit more modern than I strictly needed but the price was right. This particular model has a bonus in the form of 2 USB ports, the plan here being that I won’t have to track down ADB joysticks, mice, etc and can instead plug in hardware I already have.

The first games I wanted to get working were of course Macintosh specific Origin titles in the shape of Super Wing Commander (otherwise only available on the 3DO), and Lairware’s extremely nice looking Ultima 3 port which I’ve wanted to try ever since first seeing screenshots of it a decade or two back. Before I have a proper look at either of them, I thought I’d do a short post on what was involved in getting the machine set up.

First off, you’ll need somewhere to download the software from. There are several sites to choose from and I went with http://macintoshrepository.org for no particular reason other than topping the list in Google. The first job was downgrading my Macintosh operating system. The sweet spot for running old games appears to be MAC OS 9, this laptop came with 10 installed but would have originally run OS9 when new. I downloaded 9.2.1, burned it to a CD which you have to boot to and then install everything to the hard disk. The process is quick and simple – installation takes about 5-10 minutes. I did originally try OS9.1 but it refused to boot up and apparently didn’t support my particular hardware (predating it slightly).

I started with Super Wing Commander which was absolutely flying by at entirely uncontrollable speeds when first installed. I was wondering if I’d bought the wrong machine at this point. I tried various slow down tools with some degree of success but in the end, I’m not using any of them. When first installing the game from CD, you are given a menu of options one of which includes whether to use Apple Quickdraw for displaying the graphics. When selecting the slowest, most compatible option the game ran straight out of the box at the right speed, no CPU throttling required.

Getting it working with a joystick was trickier. I’ve got an old Saitek X52 Pro which wasn’t working in the game without the addition of a tool called “USB Overdrive”. Once installed, this allows you to map controls to the joystick axis and assign keyboard presses to the buttons. It’s clunky but appears to work correctly once you go through mapping everything. My only real complaint with the 3DO version of the game was that it didn’t have true analog controls, instead having a small number of movement bands as preset speeds. I was hoping this wouldn’t be replicated on the Macintosh but unfortunately it appears that it is. The game is running well at 640×480 resolution anyway and I’m looking forward to revisiting it.

If Ultima is more your bag, then I can happily say that Lairware Ultima 3 ran correctly without any tinkering being required. It was a similar story for Wing Commander 3 and 4 which might actually run a little smoother than their PC equivalents. Super Wing Commander has proved to be the exception rather than the rule with just about everything else I’ve thrown at this running straight off the bat.

That’s basically all there was to it. I’ve done a couple of these fixing up old machines posts before now but this has to be the shortest. The Mac is modern enough to make life simple so maybe all those Apple fans did know something after all. The battery on my laptop is all but useless after all these years – a replacement on Ebay was all of £10 so that is already in the post. The Mac also uses a proprietary port for a monitor connection and would originally have come with a VGA cable to convert it into something people couple actually use. I’ve got my eye on an auction for a cable that I think will work but Apple being Apple, they have used a whole range of proprietary display connectors over the years so I won’t know for sure until I try it.

A regular PC USB Keyboard/Mouse will indeed just plug straight in and work without any grief. I’ll look at hooking this up to a CRT with a proper keyboard and mouse when I have the required cable. Even without that I can see myself using this a ton as a portable gaming rig when I get the battery sorted out. A lot of my old DOS and Win 95/98 favourites made it onto the Macintosh and I’m really curious to have a look at some of them again in this format.

A number of DOS games were improved for this platform. For instance, I tried Dark Forces which runs in 640×480 here on the Mac and Prince of Persia has spruced up cartoon graphics. It isn’t all good though. I have a number of games on dual format Windows/Mac CD’s. One of these is the excellent adventure game The Dark Eye which was always a little tricky to run on PC. That is actually worse here as it apparently won’t run correctly on anything except System 7. I expect some of the really early Mac games may cause problems also but for the most part everything I’ve tried has run fine without any tinkering being required.

It’s early days but using a Mac for the first time has been something of a revelation. Setting this up was way, way easier than an equivalent Windows 98/DOS dual boot machine and copying software to it a piece of cake using either burned CD’s or a USB stick. Given that 486’s and Pentiums are reaching a point (in the UK at least) where the price of entry is getting fairly stupid, a Macintosh may actually be a good route of entry to gaming of this era. It can cover both DOS and the Windows era and G3’s are readily available at very low prices. Of course, plenty of games didn’t make it over to the Mac so it’s not perfect but there are some exclusives to the platform making up for it. The bottom line is I should have bought one of these years back. I’ll be taking a proper look at all the Mac ports of Origin games in due course so expect some playthroughs on here sooner or later. It’s about time I gave Shroud Of The Avatar a go however so that may be first.

A couple of days ago, my webserver failed catastrophically and I’ve spent tonight trying to get everything working again on a new server. I used to be diligent about taking backups but the last one I had was from back in January, meaning that everything from this year has been lost. That isn’t quite as bad as it sounds at first. I have made sure to keep all the PC Zone scans which have been the main content this year. I have copies of Vecalabeth and the Ultima Patcher with the source code for both, and the scan of the Underworld 3 Design Docs.

Most of this years posts are on the internet archive so I’ve recreated all of those. These are a quick bodge job and I may go back and tidy them up. What has been lost in that process are most of the images and all the comments. Not ideal but it is what it is. There may still be a chance to recover my old server but my provider isn’t being too forthcoming with information and it’s probably not going to happen so we plough on from here. The lesson from this, which I already knew even if I didn’t actually do it, is to take regular backups! An old backup is a whole lot better than no backup at least.

I can’t say I’ve tested it properly yet but just about everything seems to be working now. One exception is the contact form so if you spot anything else I need to fix best leave a comment for now. 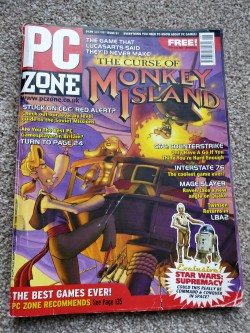 I’m going back (or technically forward) to fill in a gap with the PC Zone scans this week. This issue includes far more previews than actual reviews with Curse Of Monkey Island, Blood, Pandemonium, Little Big Adventure 2, etc.. There are some notable reviews as well with Outlaws and Interstate 76.