Since my last post, I’ve finished Force Unleashed which left me decidedly underwhelmed. I then tried the latest Doctor Who game which is free from the BBC if you live in the UK. This wasn’t great either and is so easy you could barely call it a game at all but it was reasonably entertaining if you are into Doctor Who. The whole thing only took about 50 minutes so it’s about the same as watching an episode on the telly. I then played Mirrors Edge which I’ve seen getting a lot of middling score in reviews but I was pleasantly surprised and really enjoyed this one. The story was nothing too interesting but running around the cities rooftops was always fun. I don’t think I’ve played another game that puts you in the body of the game’s character so effectively. That said, I’d seen most of what the game had to offer fairly early on so I wouldn’t rush to buy the inevitable sequel. 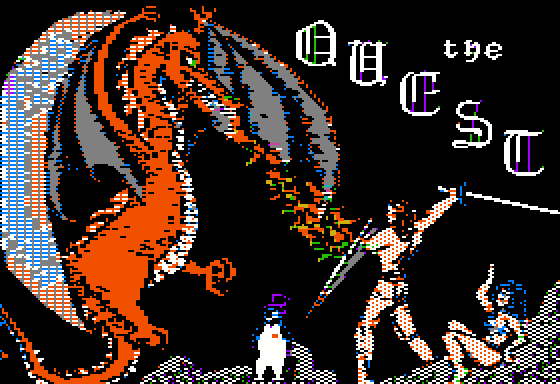 Enough about those games anyway and back onto todays game which is The Quest. This was published by Penguin Software all the way back in 1983 and was worked on by Dallas Snell who would shortly go on to become one of Origin’s first employees. He also did a sequel called Ring Quest which was originally published by Penguin but he took the rights with him and Origin also published a version of this which I played way back in the early days of this blog. 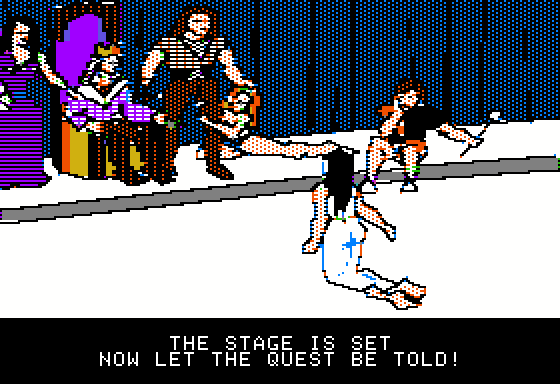 You can probably guess from the graphics, if you don’t already know, that this is an Apple II game. For 1983 it was actually quite advanced with an above average text parser that accepted sentences rather than just two-word phrases. Above all it had graphics for literally every single location in the game. The very brief intro sets the story for the game. A dragon is ravaging the land and you and the King’s champion Gorn have to go and stop it. 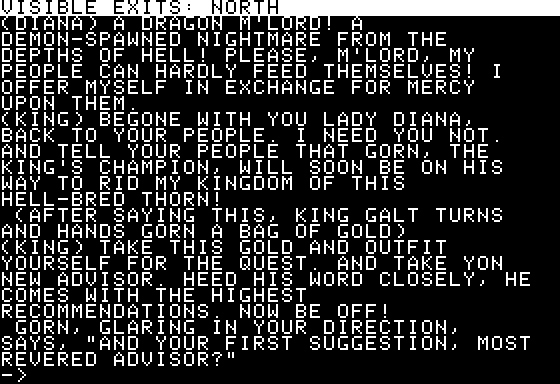 The game has two screen modes. One with the graphics and a very small text window at the bottom of the screen. The other mode is all text and also shows exits from the area + items if there are any. 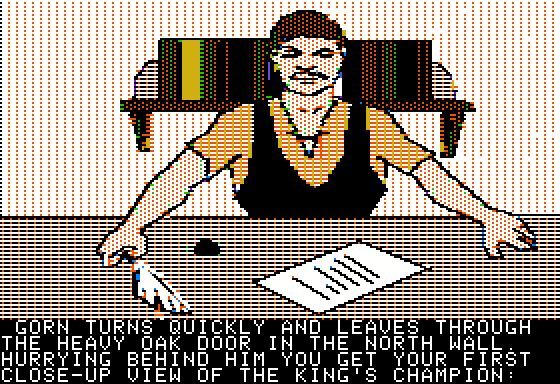 I head North to spend the gold that the king just gave me at the provisioners. 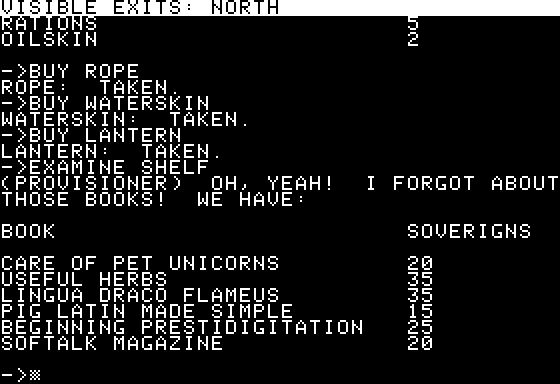 I buy what look like the most useful items. There is also a shelf of books but I only know the shelf is there from the picture. There are a couple of places like this where you need to take note of what is shown in the drawing. 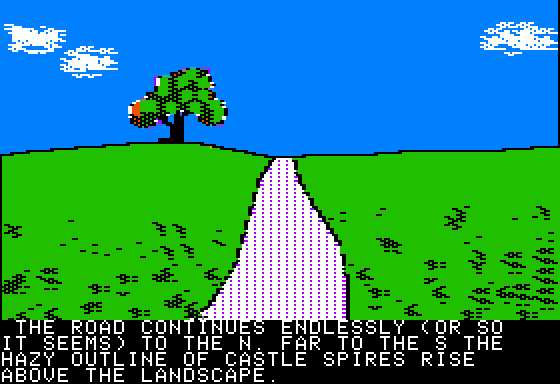 Now I’m equipped I head out of the castle and start exploring. Each location has a drawing although many of them are strikingly similar. They all take a few seconds to draw but it’s not much of a wait. It seems a little slow now but I remember playing The Hobbit on the spectrum and this is considerably quicker. There isn’t any animation on these screens except on the intro screen as a rule but things can appear and disappear. 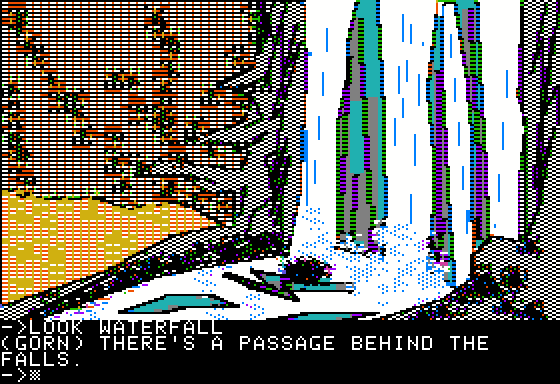 There is a lot of countryside to explore but not much in it. I do find a waterfall with a passage behind. Gorn is scared of the dark and won’t go in until I light the lantern. 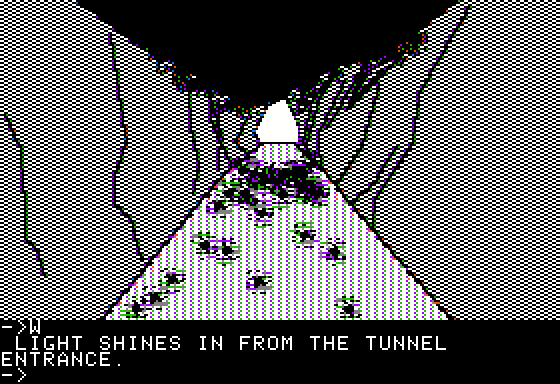 In here is a maze. I’ll be seeing a few of these screens. The trick to this one is just to keep heading in the same direction as long as possible. 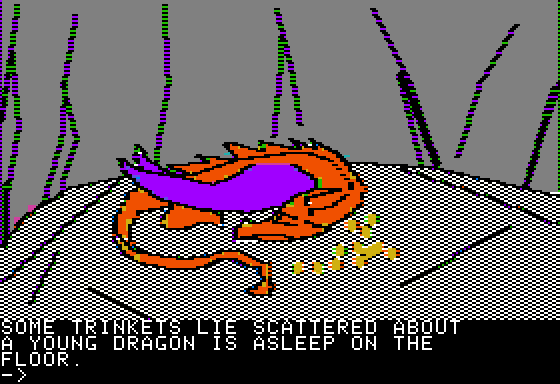 At the end of the maze is a cliff with a tree. I tie my rope to the tree, climb down and enter the cave to find a baby dragon which I pick up and take with me. I get it as far as the cliff but I can’t carry it through the caves so I have to leave it behind for now. 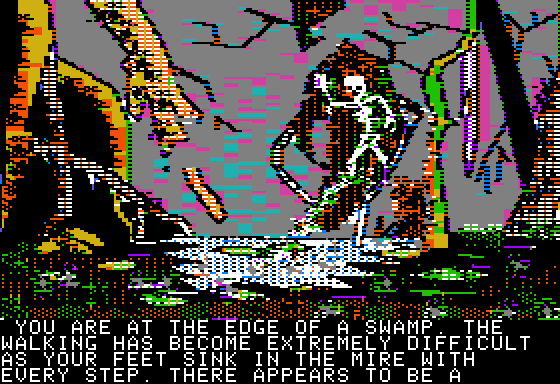 I trek all the way back to an intersection near the castle and head off West this time. I find a nasty looking swamp with Keep Out signs and the like which I completely ignore. 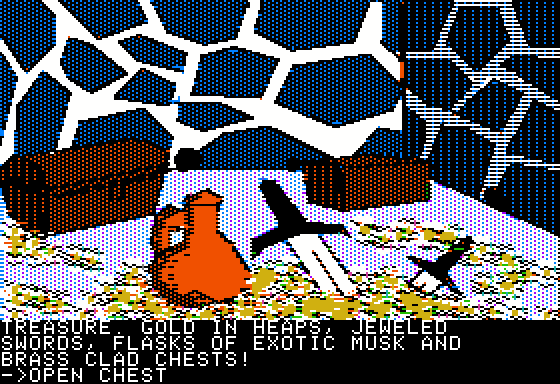 And it’s just as well I do as I discover a pit full of treasure. Doing anything in here makes a load of snakes appear but if I leave and return they have always gone again and this way I manage to get a rug out of the chest. Examining the rug I find a label with a vague hint that this might be a flying carpet. A long trek back to the baby dragon later, I use the rug and it flies me straight back to the chest again with the dragon safely in my inventory. 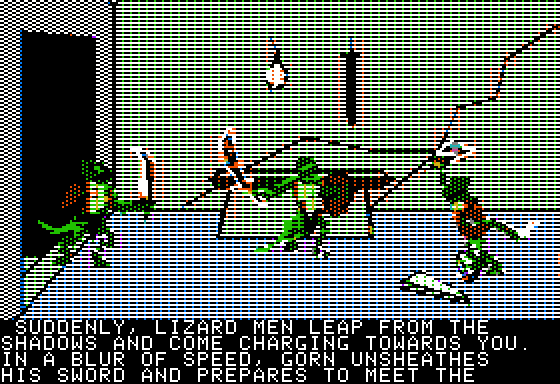 I head further into the swamp and find some ruins to explore. I head into these only to be attacked by a load of lizardmen. I could fight if I wanted but I leg it into another larger maze full of corridors looking much like the ones I was in before. I’ve never been keen on mazes but I guess they were a staple of these games back then so I shouldn’t complain. Keeping going in the same direction pays off once again. 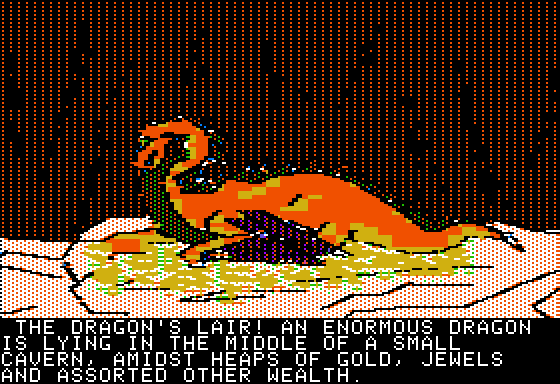 I stumble into the lair of the dragon and the end game kicks in….. 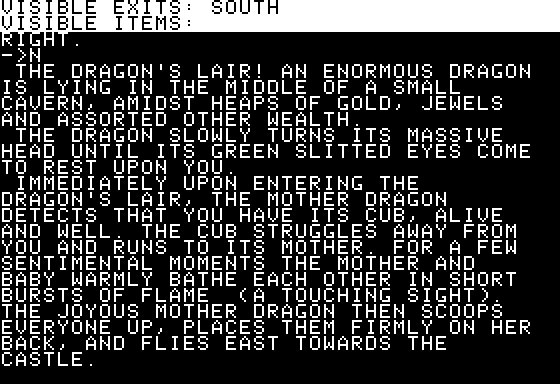 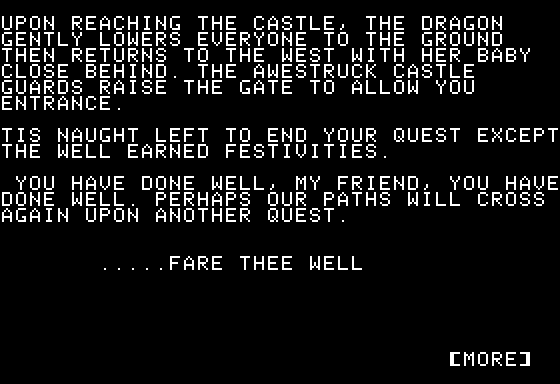 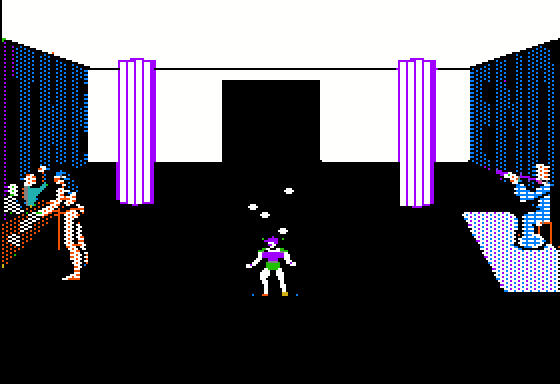 The celebrations consist of a dancer and a juggler randomly bouncing around the screen. 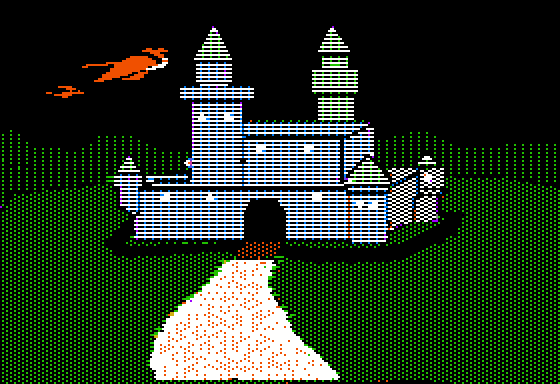 The two dragons then fly off over the castle and all is right with the realm once again.

This may have looked good at the time but in terms of gameplay it was an extremely simple adventure game by any standards with hardly any puzzles at all. There was a reasonable sized world to explore but looking at this I can see why Kings Quest was so impressive when it came out the next year. The graphics may have been nice, but from a modern standpoint they are the games downfall as you couldn’t fit that much on a floppy disk with all these full screen images. There wasn’t any story to speak of and the only real puzzles are which items to buy at the start and how to get the baby dragon off the cliff. I expect I’m a lot older than the games target audience though and I would have enjoyed this back in 1983 so I shouldn’t be too harsh. It’s a decent game for its time but not really worth going back to play it now.

5 thoughts on “The Quest”