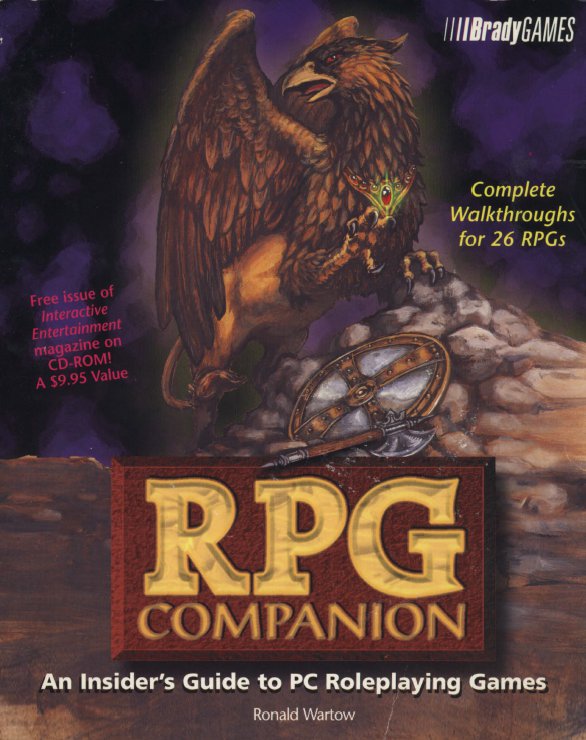 This was published in 1995 by BradyGames and was written by Ronald Wartow. The author has the curious distinction of being referred to in all 3 of the major original CRPG series. He was a farmer in New Magincia in Ultima 5, appeared in Might and Magic 3 and a fountain was named after him in Wizardry 4. The book doesn’t have any official links to Origin but it was requested by someone and since I happen to have it, I thought I might as well add it onto the list.

The RPG Companion weighs in at just over 500 pages and appears to be designed to introduce novice players to the concepts of RPG’s. This sounds like a strange notion these days, but old RPG’s were definitely intimidating to anyone who hadn’t played them before and it was something that put me off playing many of them for years myself. I’m not sure a 500 page tome is less intimidating but once opened it’s easy to read and I got through it surprisingly quickly. There isn’t a whole lot of text on each page in all honesty. If it had used a normal font and didn’t have the massive spacing, this could have been 150 pages.

It starts with numerous sections on the RPG basics. It doesn’t apply them to specific games but instead goes through the areas they have in common. This covers things like party creation and how virtual dice rolls work. It usually sticks to AD&D rules and classes in order to keep everything generic which is fair enough since most RPG’s are variants on this theme. If you are new to the genre, it’s all solid advice and includes tips like the age-old but extremely useful exploit of forming sacrificial party members at the start of the game in order to steal all their gold and equipment.

There is a brief section of interviews with developers and expert gamers, including Richard Garriot. This is unusual since it isn’t the expected career retrospective but is asking them for their tips on playing RPG’s. As you might expect there is a lot of contradiction. One of the expert gamers basically just tells you to find exploits in the games to shortcut your way to the end which didn’t strike me as especially helpful advice. The whole thing is something of a throwaway section, that does little more than allow a few familiar names to be put on the back cover. One of the main appeals about RPG’s is that you should be able to play them however you like if they have been designed well.

The last 350 pages of the book are taken up with game walkthroughs for the 26 major RPG games at the time. It sticks to the same huge text size so when I say that when a game as huge as Elder Scrolls Arena is covered in 12 pages total, only 7 of which are actually the walkthrough it should give you an idea how brief these are. They have a page of power tips which give some good general advice, and the walkthrough quickly covers the steps required to win the game. It also mentions if games have bugs that you need to watch out for, which anyone who played Arena for many hours only to find out it wasn’t completable (i.e. me) would have appreciated at the time. The games covered include several Ultima games as well as System Shock.

I didn’t read through all these walkthroughs and I’ve only ever played half of the games. From the games I do know well like World Of Xeen, the advice wasn’t too much better than a task list even for some of the key events. For instance at the end of Might and Magic 4, Lord Xeen can only be damaged by the Xeen Slayer sword and unless you cheat there is only one of them. Only getting one hit in a round doesn’t make things easy when he can annihilate half your party in his first attack. The way around this was to toss the sword between characters by trading in the inventory at the start of each turn so all 6 of them can get a strike in, but this isn’t mentioned. The walkthroughs could clearly help people out but they leave most of it up to you to sort out for yourself. There are no maps or tables of creatures/equipment and all the usual things you might expect. The Quest for Clues series was largely contributed to by amateurs but did a better job with a similar number of pages per game. I did quite like the power tips for some of the games though.

There is a CD included which is a free edition of Interactive Entertainment magazine. I’ve not looked at this as of yet. I gather it’s a multi-media game magazine which given the space limitations of CD’s and the state of video compression at the time doesn’t sound like the best of ideas. It doesn’t matter these days with fast Internet but at the time I liked my magazine discs full of demo’s and possibly game patches, and was happy to keep the reviews on paper. I’m slightly curious but the CD is still sealed in the back cover of the book so I’ll probably leave it there.

All in all, I wasn’t too impressed with the RPG companion. For it’s size, it is lacking in substance and the walkthroughs are fairly poor unless you just want to be told what tasks to perform. If you expect a thorough guide to any of these games, this isn’t the place to look. It has made me curious about some of the other games that are mentioned though and I may try a few of them out in the future.

1 thought on “The RPG Companion”