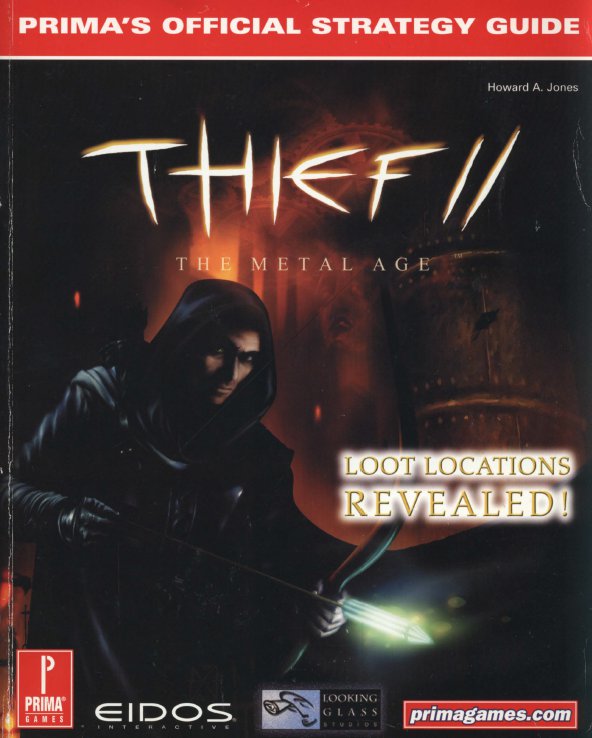 I’ve had a policy of saving the best till last with these books recently. This means books like the final Technocrat War novel and More Avatar Adventures are getting held back while I get through some of the one’s I’m not expecting too much from. My hopes for the Thief 2 guide were never high given that the first one was substandard in near enough every way, offering little for either the fan looking for extra information or the more casual gamer who just wanted helping through a level or two.

The Thief 2 guide is arguably better, but I’m sorry to say it is basically the same again. The level walkthroughs still take the form of a lengthy series of instructions with screenshots for the game. The only maps you get are those from the game, which is fine when they are clear but useless in the levels where they weren’t. You would expect there to be a list of loot, but you have to read your way through the whole walkthrough to find loot locations. Whether all the loot is mentioned is hard to say, although it does admit not doing so for at least one of the levels (despite claims to the contrary on the front cover).

Because of the format used, if you do need help with a level you are reduced to reading the whole walkthrough until you can spot something relevant. At least in this guide that help will probably be there but I’d have expected something better than this. If it was done in the form of a narrative, perhaps from Garrett’s point of view, I’d be more forgiving but it isn’t anything you would want to read through for fun.

The first 30 pages or so of the book, give some general background information but there is little of note here either. There is a short interview with the project lead to give some insight into the design process which is the highlight. Other sections go through the various weapons, items and enemies but this doesn’t tell you much that you wouldn’t pick up from simply playing the game.

This book does strike me as being more helpful than the Thief 1 guide but it’s still one of the worst that I’ve looked at for the blog, with little to offer over an FAQ. A classic game like this deserved far better. Against my better judgement, I’ve just ordered the Thief 3 guide. Let’s hope that proves to be better.

Apart from Thief 2, I’ve scanned the guides for Clandestiny and Galapagos since the last post. I expect most people haven’t heard of either of these games, possibly for good reason but they are both of interest at least to me. Clandestiny was by the same people as The 7th Guest and 11th Hour and follows the same formula as both of those. It takes a more cartoony approach and has lower production values than either of those games, but is still worth a look for anyone who enjoyed those first two. It sold incredibly poorly, but can still be picked up relatively cheaply thanks to the low demand.

Galapagos is an even more obscure game which came out around the mid 90’s. It had an almost unique premise of using an A.I. creature as the game’s protagonist, which was entirely out of the control of the player. You have to manipulate the environment around the creature to get it through some bizarre 3D levels. Your little creature allegedly learns as you progress, making it easier or harder to shepherd around depending on how you treat it. The dodgy camera, high difficulty and the uncontrollable player character made this a serious test of your patience, but there is something about it that appeals to me. I’ve certainly never played anything else like it.

I’ve also been sent scans for The Dig which aren’t anything to do with Origin but I’ve added them onto the list anyway. Many thanks to Matt for these.

The Deus Ex – Invisible War guide will be next, probably tomorrow.