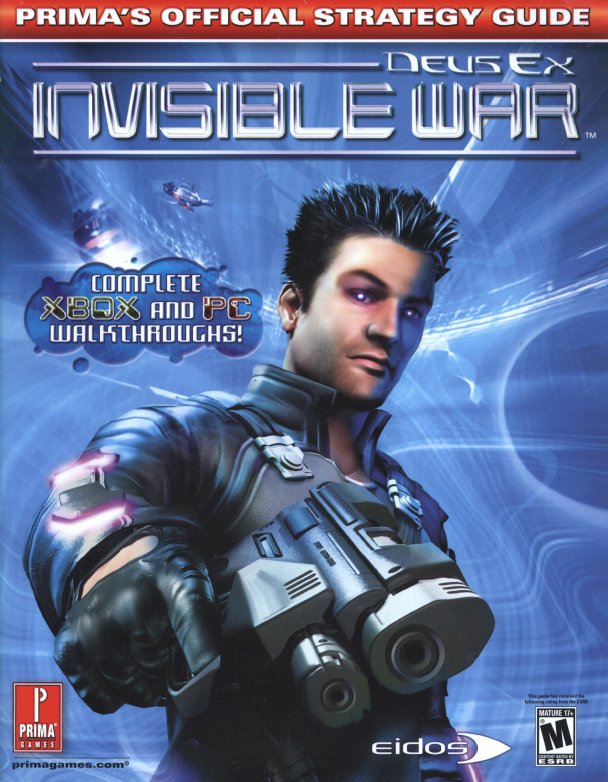 This was published in 2003 and is a joint XBox/PC guide, possibly explaining the extremely large format. It’s relatively short, but there is plenty packed onto each page and the whole thing is in full colour with loads of artwork scattered throughout.

The early pages give all the background detail to the world and it’s characters, including a full summary of the events in Deus Ex. It’s stated clearly amongst all this that in the world of Deus Ex Invisible War, all 3 choices at the end of the previous game were taken. I spotted two of these when playing the game but not that JC had also sided with the Illuminati which I don’t recall being apparent at any point. The reviews I remember reading for the game, stated that it had followed one of the 3 possible outcomes and other sequels would pick another which was clearly not true.

There is a section with general advice on which mods to take and weapons to specialise in. Very unusually, the author just tells you what he tried in his 2 playthroughs and the pros and cons of this. I quite like this approach as there are no right or wrong choices and it leaves you to make the call for yourself. This makes it a better informed choice, without guiding everyone down the same path.

There are backgrounds for all the major characters, and specs for all the weapons and creatures. These are accompanied by notes from the Ion Storm playtesters offering helpful advice. The best general tips for how to play the game can be found in these, if you want to avoid the full walkthrough.

The walkthrough sections each start with transcripts of some of the conversations you will overhear in each area. These are shown out of context but they still get across some of the storyline. The walkthrough itself uses annotated maps, and is fairly entertaining to read throughout, without going into the plot in any real depth. The 4 various endings are spelled out for you allowing you to take your pick, although I expect most players will go back and try them all.

I would like to have seen lists of the more important items somewhere in the walkthrough. I’m sure the vast majority get mentioned but it is definitely the main downside of this guide. The walkthrough is much better organised than Thief 2 was anyway, giving simple indications of which locations and instructions relate to receiving and completing particular quests. I do quite like to see some artwork in these guides, but it did seem a little overdone here with the same images appearing over and over again.

On the whole, this is another decent guide from Prima though. There is a lot less superfluous text than plenty of others I’ve looked at, and this keeps it entertaining and relevant throughout. It is scanned in and available with all the other downloads. I’ve started reading the final Technocrat War novel which will be the next book on here. I’m also planning on a playthrough of Freelancer, possibly starting this weekend.