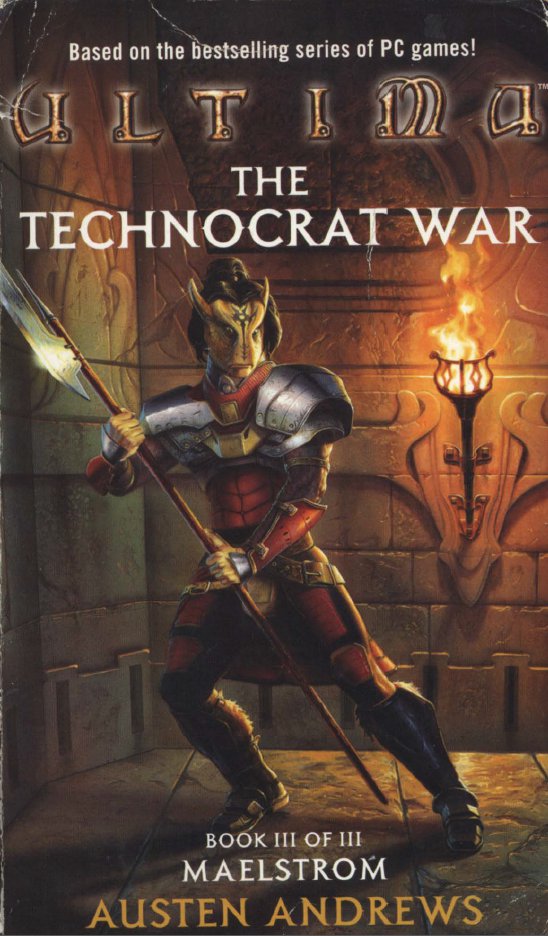 This was the final novel in the Technocrat War series and was published in 2002 by Pocket Books. It picks up immediately after the events of the previous novel and follows all the various characters as they attempt to do their part in the war against the pact of four.

Once again, Blackthorn is in no way the enemy in this novel and is even fights on the side of good in the later stages. The book is instead about the battle against the pact, making this a civil war in effect although this isn’t apparent to most of the people doing the actual fighting. Only the pact members and their direct associates could be described as being on the side of evil as such.

All of the main protagonists have split up into their own groups, and a large part of the novel flits between them as they each pursue their own agenda. Montenegro has joined up with the Technocrat’s at this point, to the extent of leading troops into battle against the rogue Jukan warlord Bahrok. Raveka in the meanwhile goes back to Britannia, in an attempt to delay their fleet launching to join the war. The Jukan side of things is told through Thullan, who attempts to get her side to accept a truce with the Technocrat’s. That just leaves the Meer, who haven’t figured largely in the series so far, leaving the ambitions of their pact member a mystery. This part is briefly told through the misadventures of Jatha and Fairfax who end up being teleported to the Meer homeland.

It turns out the cataclysm was actually the result of 3 separate catastrophes in different worlds. Sosaria as it is now, is actually the remnants of those worlds which have joined together. There are 3 splits in these joins, which allow the holder to claim huge amounts of power. Controlling all 3 would give the power to split the world apart and hence control everything. The meer chamberlain Kavah is using the war as a distraction to claim these 3 “beacons” for himself and hold the world to ransom.

I’ve tried to avoid too many spoilers with these books so I won’t say any more about the plot. There is certainly enough going on to make this another page-turner and it’s up to the standards of the previous books. I’d have preferred it to concentrate a little more on specific plotlines rather than the incessant switching which prevailed in the middle stages, but it’s only a minor criticism and the strands start to converge in the later chapters.

The final part of a trilogy is often the least interesting as events work toward an inevitable conclusion. That is arguably the case here as there is less character development in favour of pushing along the story. Thankfully the characters are well enough established that I was happy enough to go along with this. The ending when it comes is the inevitable huge battle but it does still hold a few twists and turns.

Ultimately, I’d prefer that this series had been steeped in the Ultima lore I know from the main series rather than this UO2 offshoot but anyone with an interest in fantasy novels who can look past that, or has never played an Ultima should enjoy these. They were the best novels I’ve read for the blog, and I wouldn’t have been sorry to see another trilogy of them. This was actually final published novel based on Origin franchises (so far) and is now available on the downloads page with the rest of them. I do still have the “new” Wing Commander novel to read, which I’ll be starting next.

I should quickly mention that GOG are back to publishing EA games as of today and have released Dungeon Keeper 2 and Wing Commander 1/2. I gather that as with every previous EA release, this news has been tarnished by the add-on packs not being included. This is particularly surprising for WC1/2. The same expansions were initially missed off the Kilrathi Saga compilation but later released as patches for the game for free by EA. These patches are still hosted by EA and linked from wcnews, so I gather there is no legal problem with the Kilrathi Saga version of the games even though it’s exactly the same content. If that is the case, why not just release the Kilrathi Saga on GOG instead and everyone would be happy.

I’d be interested to know how the legal rights over something like SM1 ended up being different from WC1 in the first place. It was after all originally released as part of WC1 in a special edition version. I assume my copy must be one of these. There is nothing on the box or disks obviously different, but it has SM1 included straight from being installed. If anyone can shed any light on the legal situation, I’m curious to know what the problem is.

Even without the add-on packs these are still great games of course and worth a lot more than the $6 asking price. If it was me, I’d buy one the compilation CD’s on Ebay instead, but that will probably cost a little more.