As usual, it’s been longer than I intended since the last post but I’m back again for another game. I’ve been playing more Steam games in the last few weeks including the Penumbra series and Bully which has been keeping me away from here. I saw that the Ultima 4 Neverwinter Nights mod has been updated over on Ultima Aiera and was going to play that next with the aim of doing a trilogy of Ultima remakes with Lazarus + the U6 project but I found out I needed the second expansion pack for NWN and I only own the first one. I’ve ordered the second off Amazon for all of 1p+postage so I’ll have to wait for it to arrive before I start on those so in the meanwhile I’ve decided to finish off the Thief series with Thief Deadly Shadows. 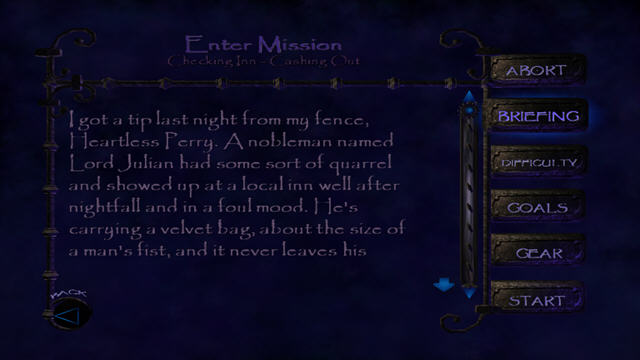 There isn’t an intro movie and it’s straight into the game’s first mission. The first thing I notice is how big the text and interface is. This is similar to Deus Ex II and clearly designed more for consoles than PC gaming. It does feel in my face using a monitor but it does the job even if I do feel like I should be sat a few feet further away. The first mission involves stealing a medallion from a Lord Julian who is staying at a local inn.

I should mention that I’m having to use a hack to get the game to play in widescreen. This appears to work well at first but I later discover than it causes the savegame screen to crash and the game also crashes when I finish the level so I’m forced into playing this in 4:3 in the end. 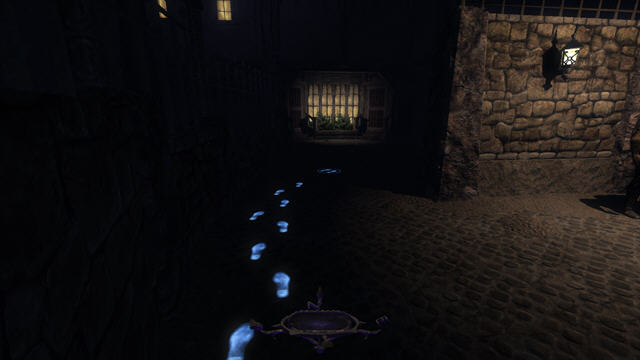 I can’t set the difficulty in the first level so I’m stuck on normal mode. It’s a training mission where I’m guided through every stage, right down to glowing footprints on the ground with my trail to follow. 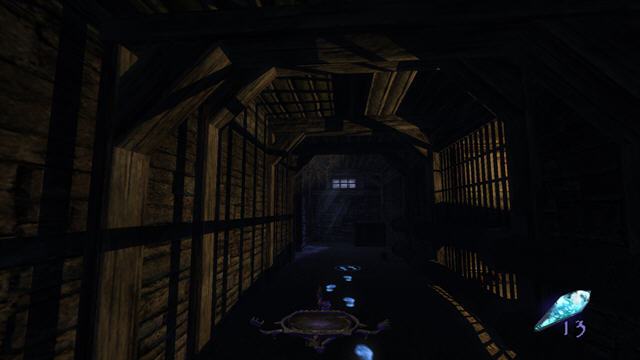 The gameplay mechanics are very familiar after 2 other Thief games. The new engine is a serious improvement visually. There are real time shadows all over the place and it still looks excellent. The character models don’t bear up too well sometimes when you get close to them but they are well animated and look fine at any sort of distance. The only snag to this engine is just like Deus Ex 2 it doesn’t half load slowly. I’m really going to have to be careful in this game not to get into fights with the guards as I can live without the 30 second load time when I get killed. 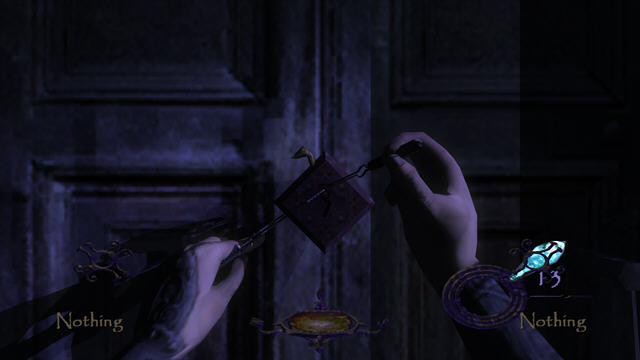 The lockpicking mechanic has changed in this new game. I have to swing a pointer around to one of the four compass directions until I see the lock start to move then hold it steady until the lock clicks. This is easy enough once I know what I’m doing, although the instructions just mention finding the sweet spot and I only work out that this is only ever in the same 4 places by trial and error. It may get more complex later in the game I guess but even if it doesn’t it’s still more interesting than swapping between two picks as in the earlier games. 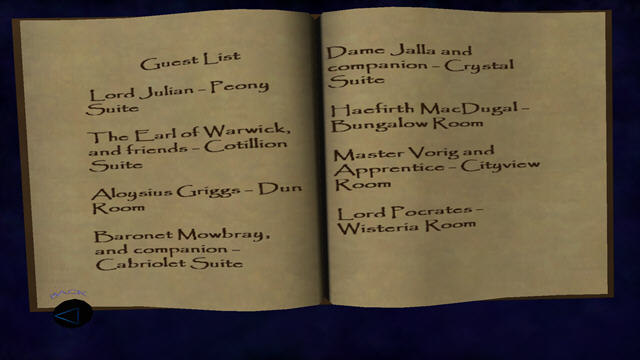 I knock out the innkeeper and have a look at his book to learn where the Lord’s room is. The blackjacking is slightly different. I just click to swing and I can’t hold to build up power. I prefer the original games system over this but it’s only a minor change. Combat with a dagger is similar – I try to avoid this but I do end up taking out one guard this way later on. If anything my combat prowess is reduced further than eaelier game and I really cannot afford to get in fights if this is anything to go by. 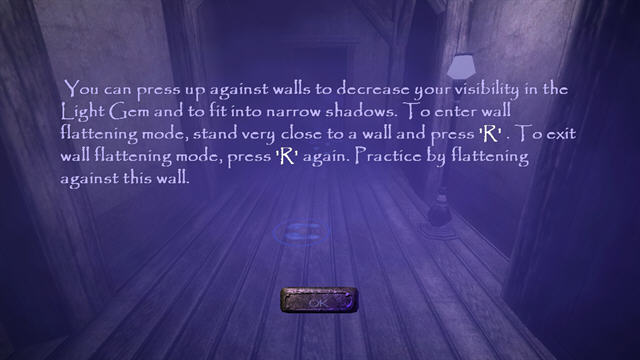 There is another new element for Thief 3 where I can hug a wall to hide against it. Not sure how much benefit this will really be in the game but it reduces my visibility a little so it might be useful somewhere. 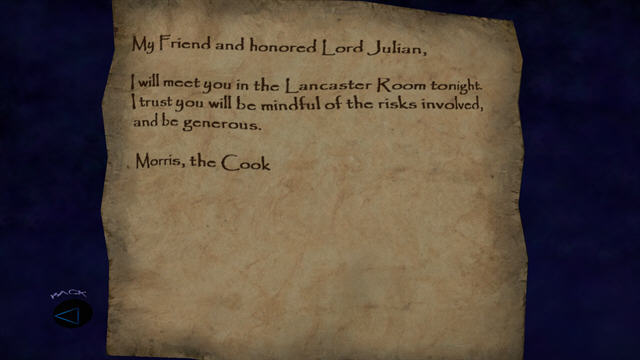 I find the Lord’s room but he’s not here and neither is his treasure. A note suggests that I should look in the Lancaster room. 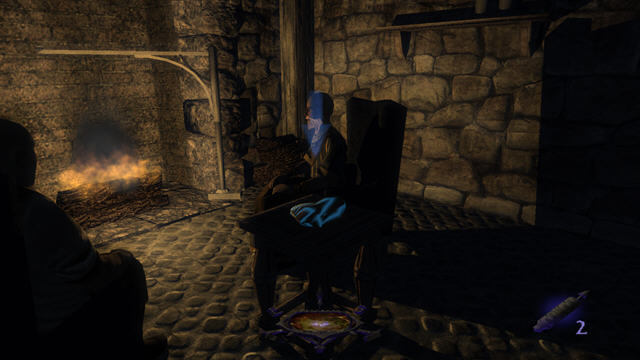 He is sat by the fire discussing a plan to steal an opal. This plan requires a medallion which he has in a bag on the table next to him which can be used to open the vault containing the opal. I sneak to this table and grab the bag before heading out to finish the level. 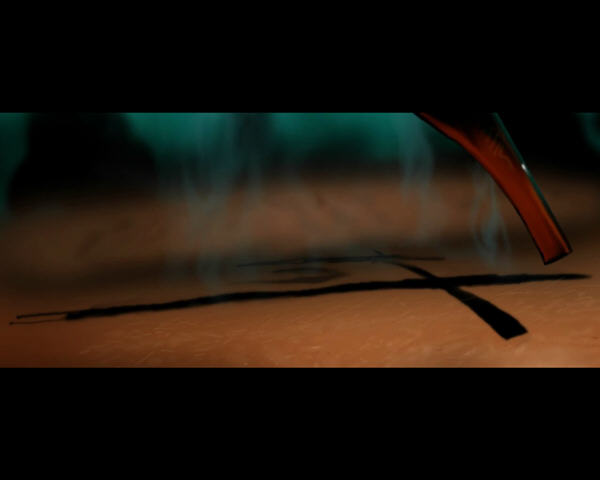 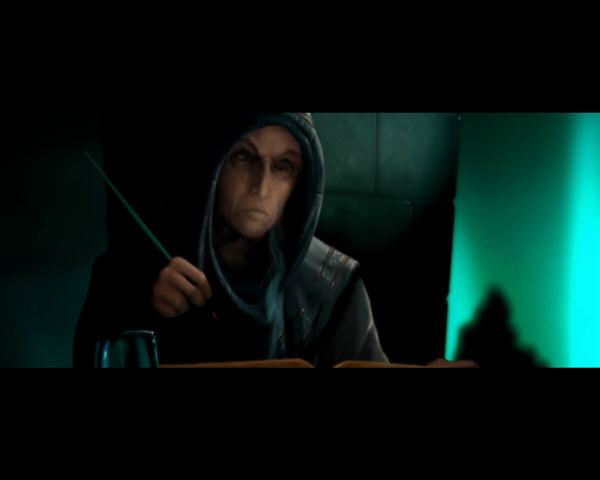 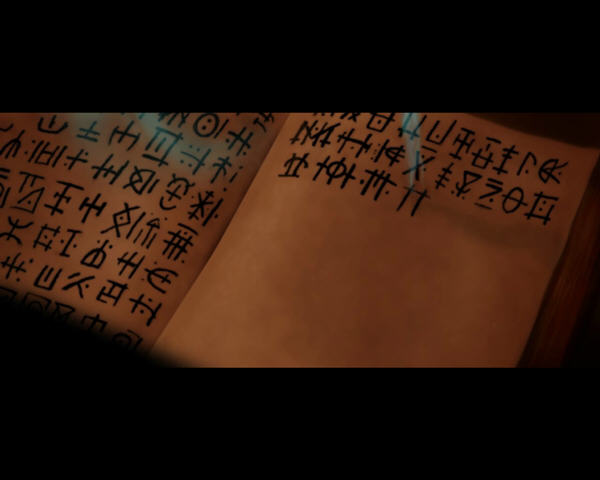 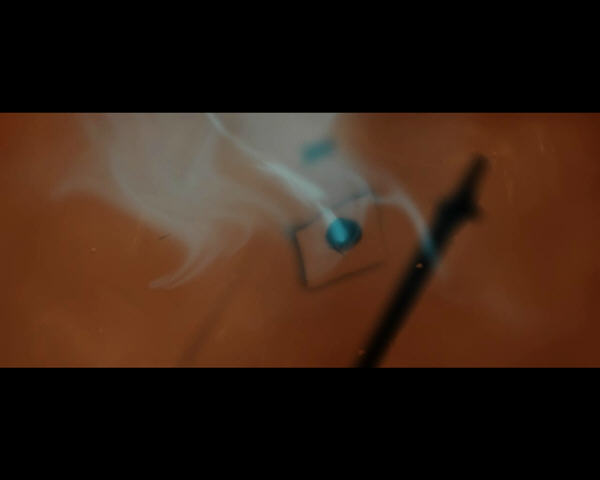 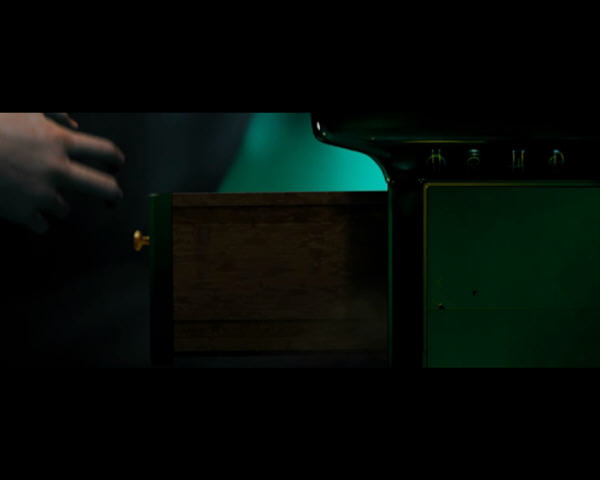 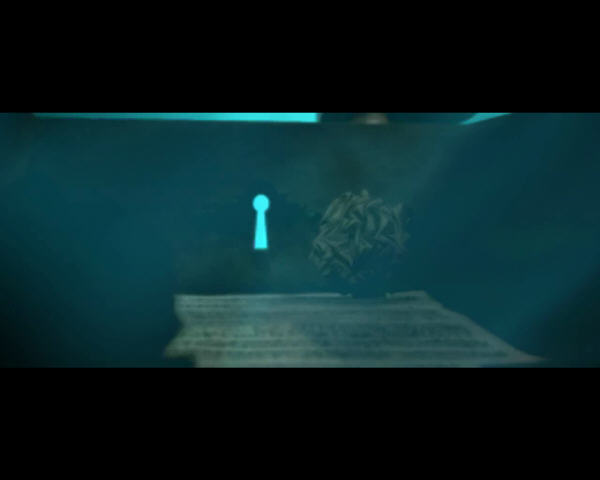 The games first cutscene follows. A man is writing smoking letters in a book. These letters then morph into other symbols, he rips the page out shoves it in his desk and I see a blinding light coming through the drawers keyhole (from an in-drawer viewpoint). I have absolutely no idea what this was about but it will no doubt mean something later. 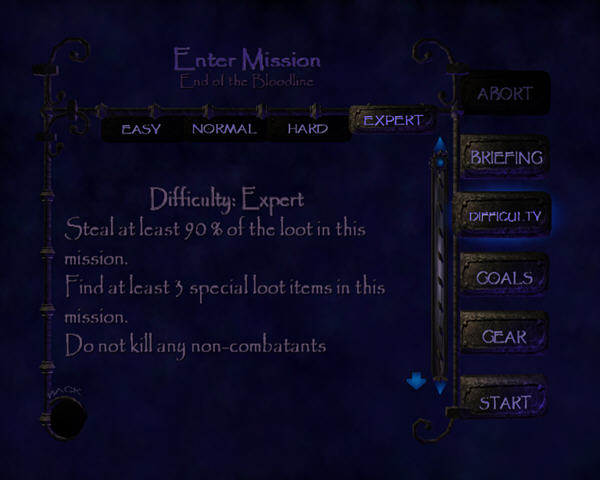 In the mission briefing, I learn that my fence has identified the medallion’s crest as belonging to the Rutherford family. The opal is in the hands of Lord Ember (Julians cousin) and I like Julians plan so much that I decide to follow it myself. I get close to the mansion on a supply cart and then I have to signal the cook to open a door to get in by dousing a torch outside the building. 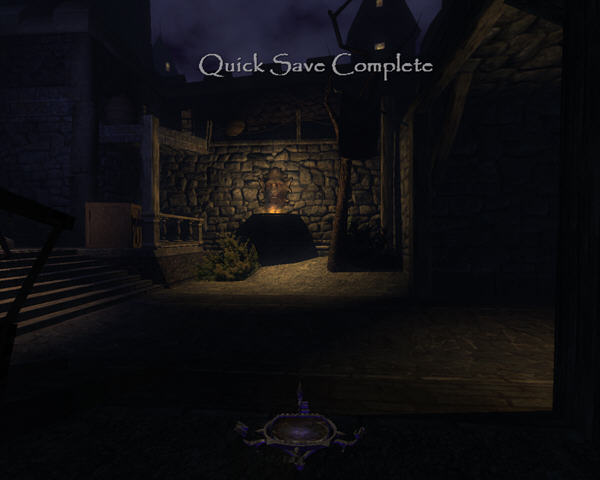 I’m facing the torch I need to douse at the start of the mission so I just shoot a water arrow into it and then a door opens up above and I climb up and into the building. 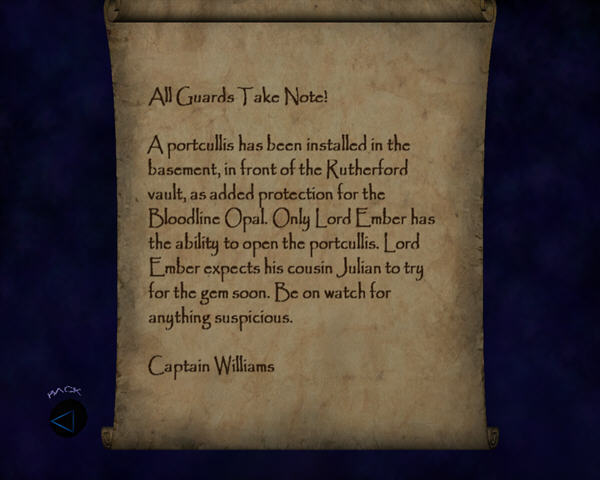 I spot a note on my way in which hints that the mission isn’t going to be entirely straightforward. I’m also playing this at expert level, which looks to be the same as normal except I need to find 90% of the treasure in the level as well as 3 “special loot” items so I’m going to have to explore everywhere. 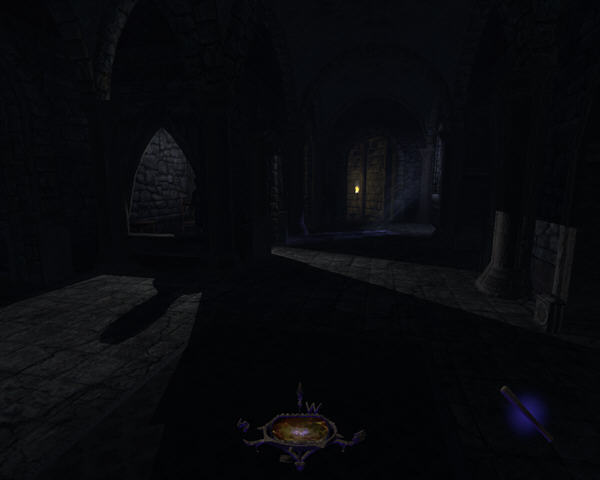 I start exploring the house. There are plenty of guards but also loads of shadows to hide in. I struggle taking out my first few guards but I soon find my feet and things get easier after that. This place is much bigger than the previous level although still not huge and I soon find the staircase down to the cellar. There is a guard standing watch but he never changes direction so I just creep up behind him and wallop. 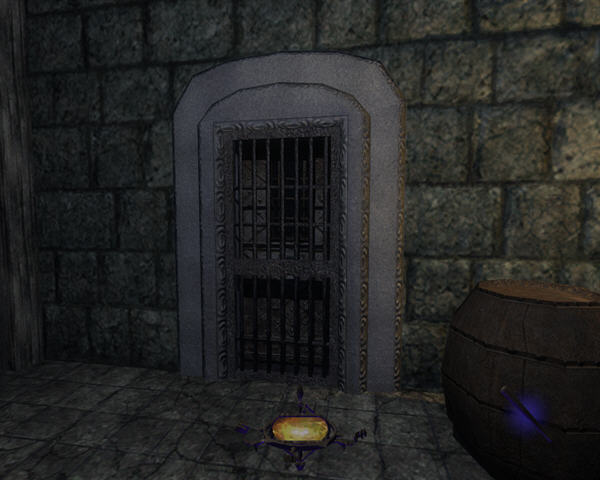 The portcullis I read about earlier is in place and I’m going to have to figure out how to open it. 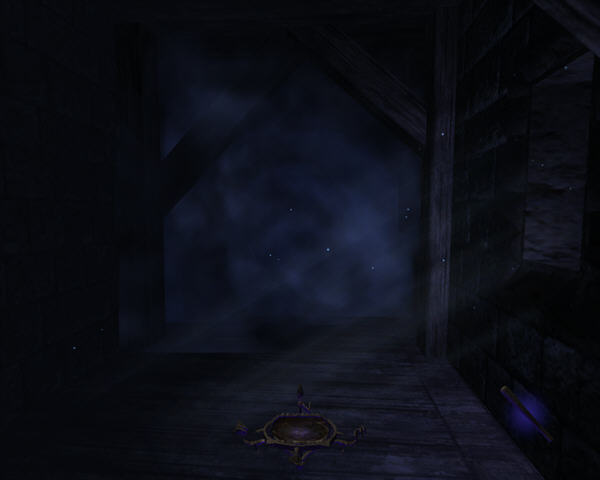 I spot a strange looking fog at the end of a corridor. This looks sinister but I walk into it to see what happens – it turns out that this is just the exit to the next part of the level. I don’t exit the level yet as I figure I may as well explore every nook and cranny of this one first. 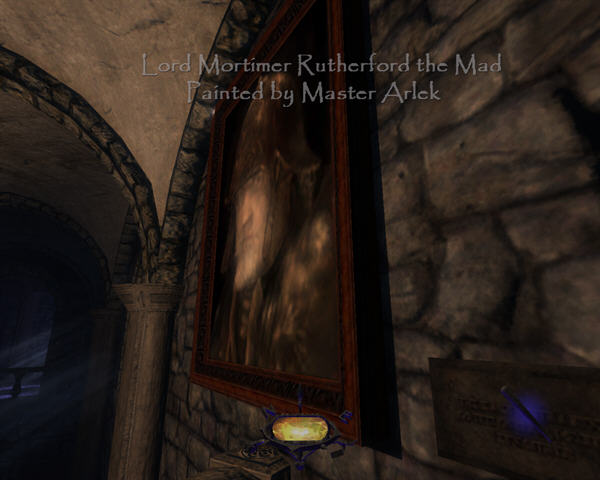 The exploration pays off. In a locked room, I find a box I can push to reveal a hole in the wall. Crawling through here gets me to a balcony with a valuable portrait I can nick. 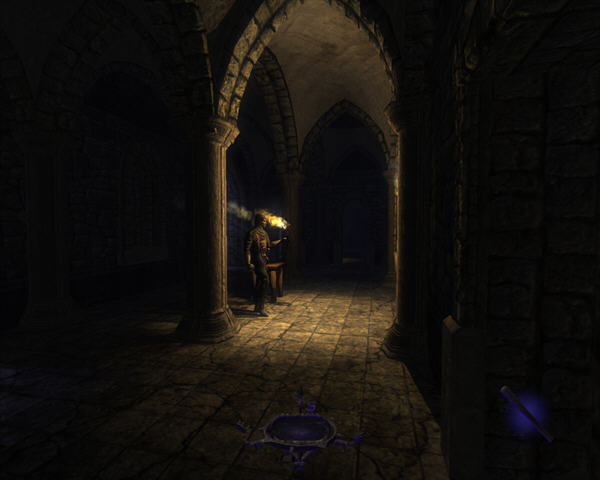 I move onto the next part of the level and get a new set of guards to cope with. Some carry torches which doesn’t make them any easier to hide from and I need to make sure I approach them from behind. 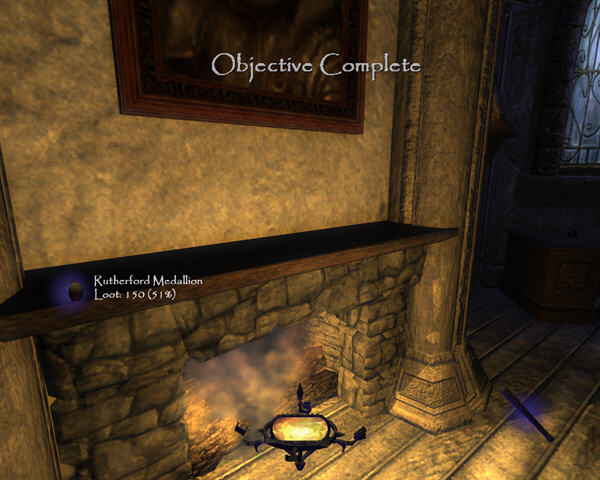 The inner quarters of the Lord and Lady are in this part of the castle. I steal the two other special loot items from their rooms but I’m still a long way from the 90% treasure I need. I learn that the Lord and Lady don’t exactly get on and she has plans to poison him. 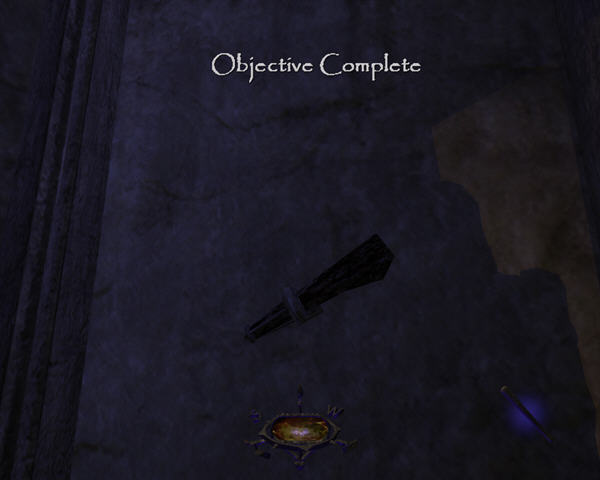 I search the Lords room until I find the secret switch in the form a torch on the wall. This opens up the portcullis back in the first level. 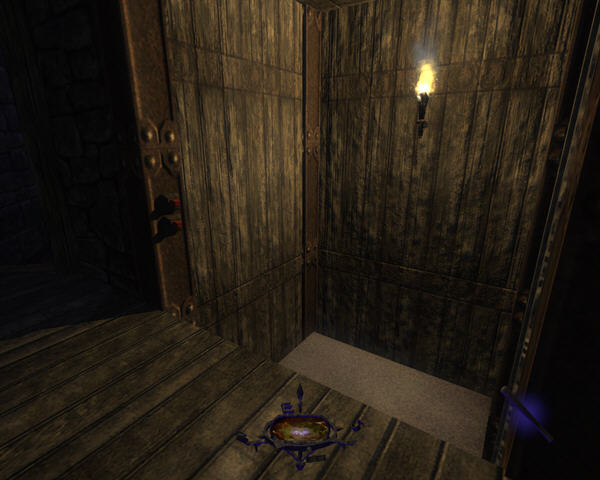 Before I head for that, I explore the rest of this level to find any treasure I can. There is a lift to get me down to the ground level and the working quarters for the house are all down here with a few treasures to steal along the way. 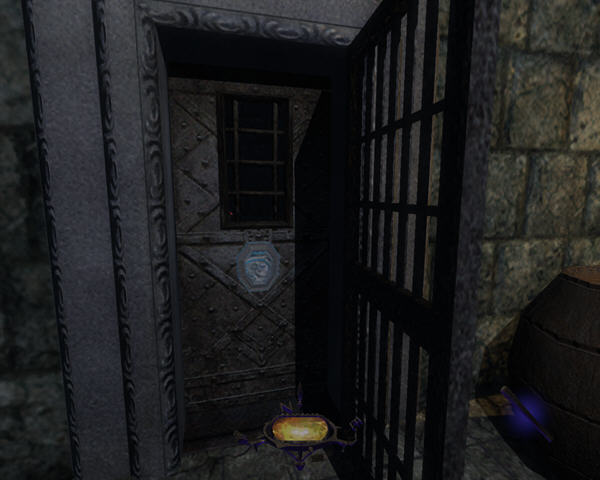 When I think I’ve explored everywhere, I head back and find the portcullis has swung open and I can now get into the vault and steal the monumentally large opal as well as a couple of jewels. 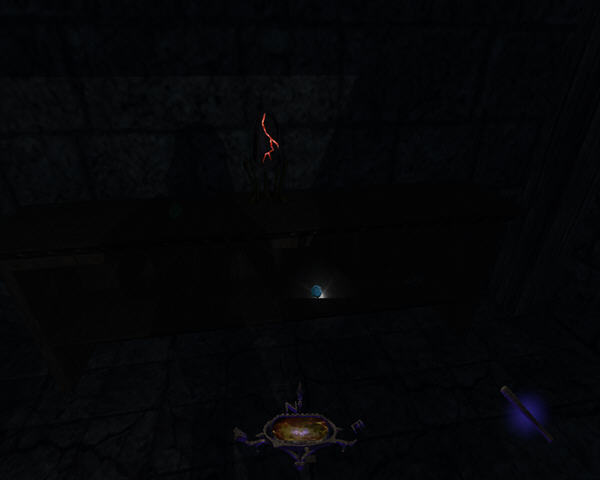 This still doesn’t get me the 90% treasure I need to I end up spending about 20 minutes wandering around trying to find the last bits. I eventually spot a ring on this statue which gets me to exactly 90%. God knows where the other 10% is but I don’t worry about it and instead head for the level exit. 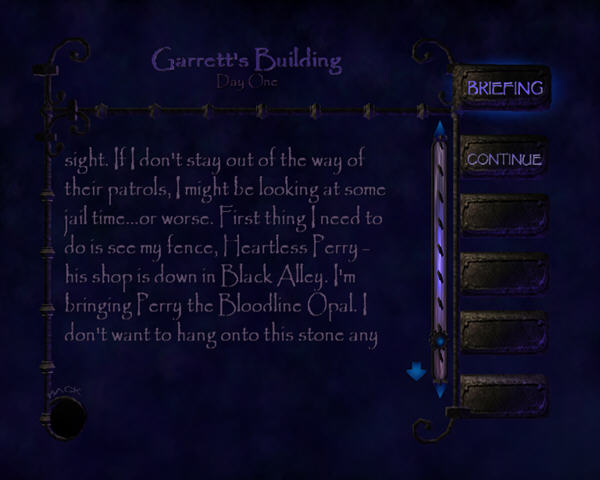 The next mission looks a bit different as it isn’t really a mission. I just need to wander through the city and find my fence to take him the opal to be cut up and sold. I guess this is going to be a hub level of sorts but I’ll have to wait until tomorrow to find out.

I’m liking the look of what I’ve seen in this game so far. It’s a modern version of the older games in the series with slightly tweaked gameplay. My major reservations for now are to do with the engines limitations. The game certainly looks good but the loading times are really poor, especially when I’m running this on a machine far faster than anything that was out in 2004. If I have any serious difficulties anywhere in the game and end up having to reload a lot, it will get seriously annoying. The size of the levels could also be an issue. The fact that it had to split the first real level into 2 sections doesn’t bode well. The whole thing put together would still have been a small level in Thief 1. Ion Storm appear to have compensated by slowing down the speed I move and this was a further irritation when I was searching around for the last bits of treasure. I’m also concerned about the games longevity, I understand their are only 10 missions in total and I’ve already done two after playing for just an hour or so. A hub level smacks of padding although I don’t necessarily have a problem with the idea provided it doesn’t prove too much of a chore.