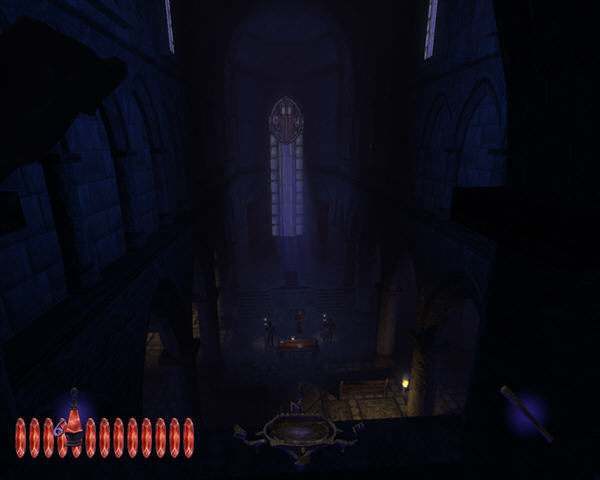 The cathedral is an impressive location. One of the things that has been done particularly well in this game is the moonlight leaking into the buildings. There is a sparkling shafts of light effect giving the illusion of dust drifting around infront of the windows which works really well in all these levels. I’ve also been using the EAX sound which is particularly in evidence in here with some serious echos although the transitions between rooms can be harsh and unrealistic. It’s all adding atmosphere though which is key to the Thief experience. 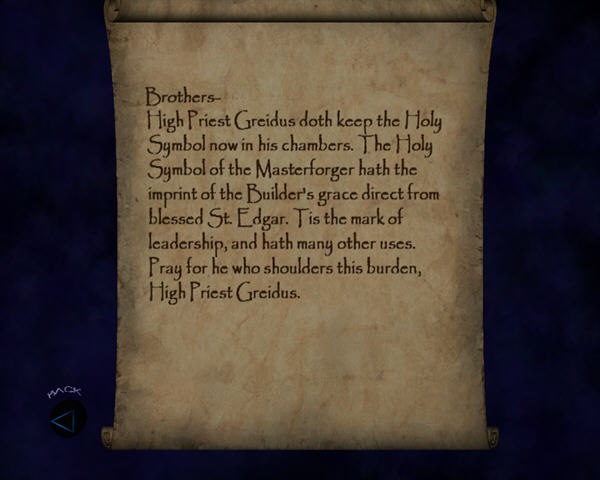 I explore the areas inside the main church and find a note mentioning a holy symbol which then appears as an objective in my list so I guess I’m going to have to find it. 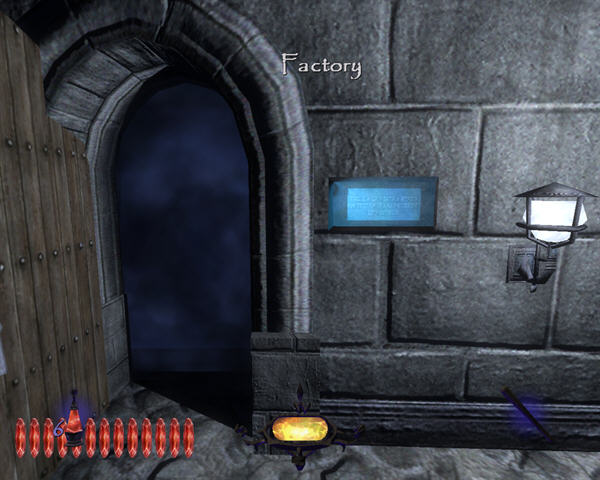 There are a few subrooms but most of it is just the central worshipping area. I even steal from the offerings bowl in here which is pretty low but if I’m going to get that obligatory 90% of the treasure I’m not leaving anything behind. I find a route into the factory attached to the church but I leave this for now to attempt to explore this half of the level in full first. 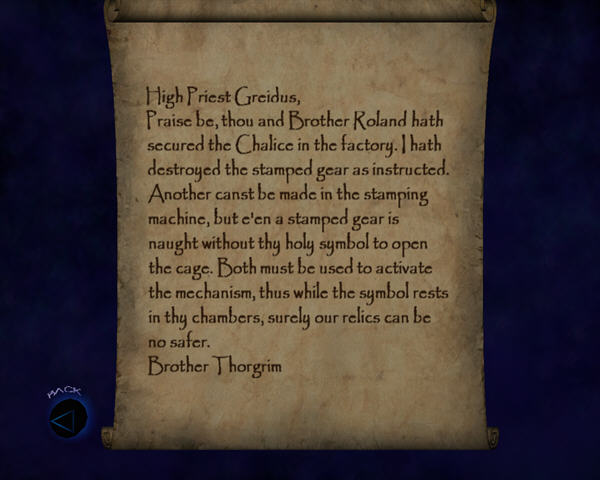 I quickly find the holy symbol when I start exploring the living quarters off to the East side of the church. There is also a note saying how I must use it and a stamped gear to get to the chalice. I’ll need to head into the factory to do this but I finish exploring first. The treasure placement is a lot better in this level and I have 49% of the total before I leave for the factory. 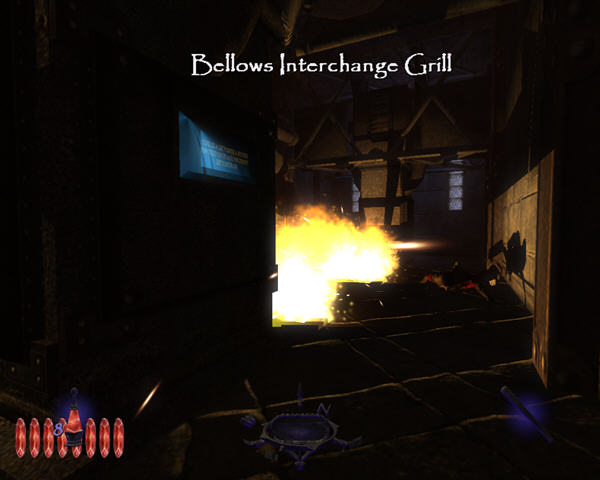 The factory is the usual giant machines you would expect to see in a Hammer temple. I can turn a lot of them on and off with large switches. This one throws out fire when switched on which gives me an easy kill on the guard in this room. Most of the other switches I find just turn off light sources though. 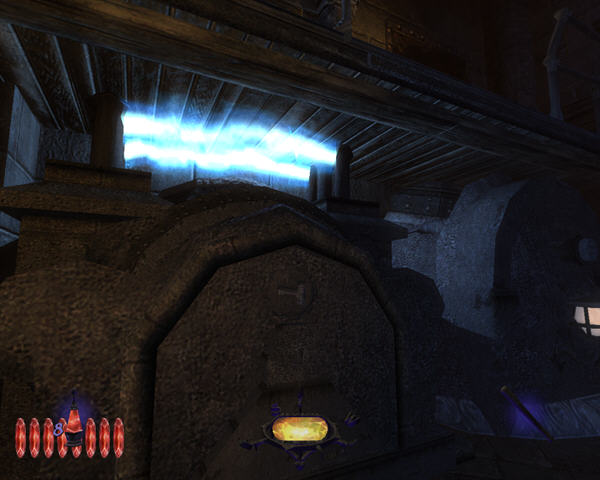 I find a machine to use the holy symbol in but I still don’t have the gear I also need so I carry on looking around. 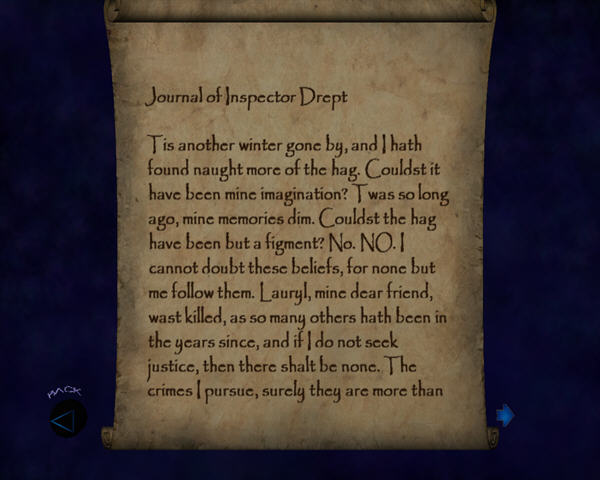 I find a room belonging to a builder inspector. This guy is the builder equivalent of the witchfinder general by the sound of it, going around the towns seeking out evil. He’s probably not someone I want to meet but his journal is interesting and talks of a hag he is chasing. I expect I’ll hear more of the hag. 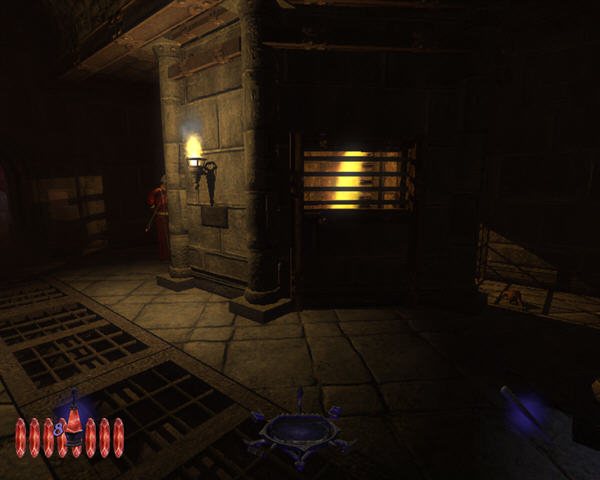 Near here is a room where a man is burned alive the moment I walk in. Having knocked out the builder responsible, I turn off the fire, open up the door and steal the valuables off the cremated corpse. Garret is showing a definite lack of virtue in this mission even for him. 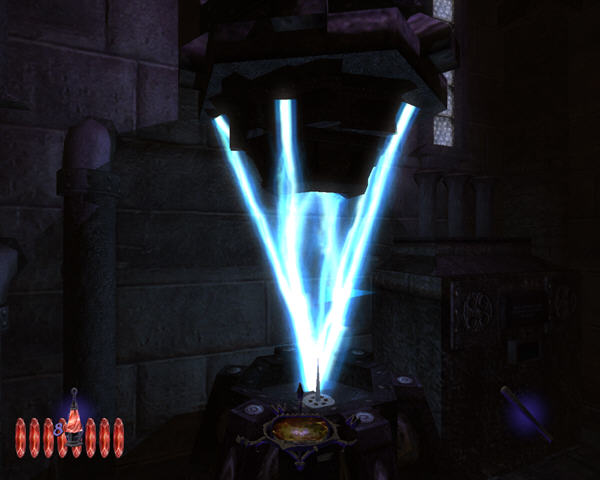 I find the gear I’m looking for nearby and get it stamped with the holy symbol. 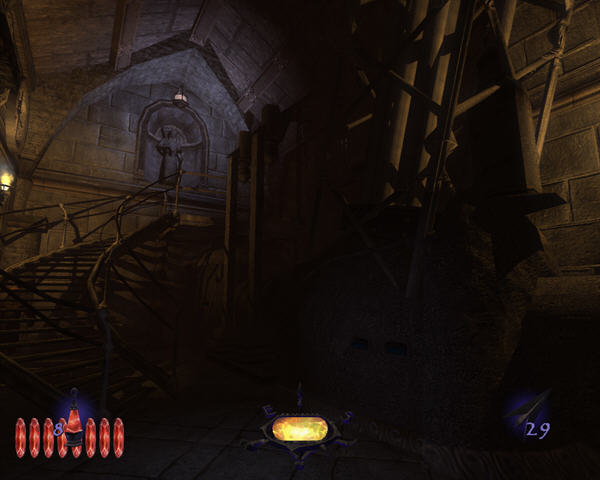 There are some great looking locations in this game so far and rooms like this in the factory are some of the best yet with the curving staircases and giant machines. I was impressed with this engine in Deus Ex 2 but it’s really come into its own in this game. 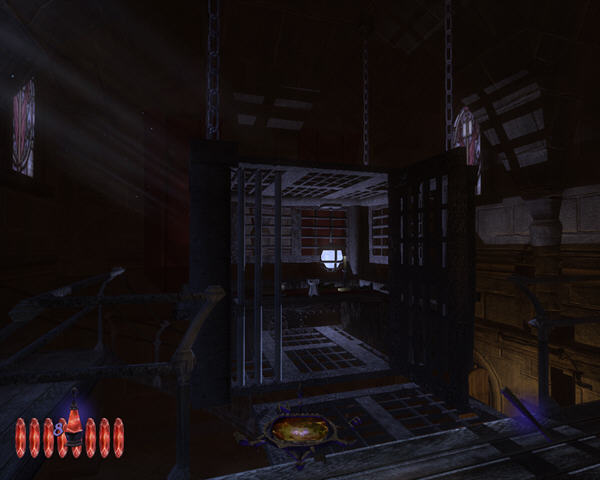 I take my cog and use it on the machine from earlier which lowers a cage down from the roof containing the chalice + a few other treasures. I’m still slightly short of my treasure target although I’m in the high 80’s by now so very close. 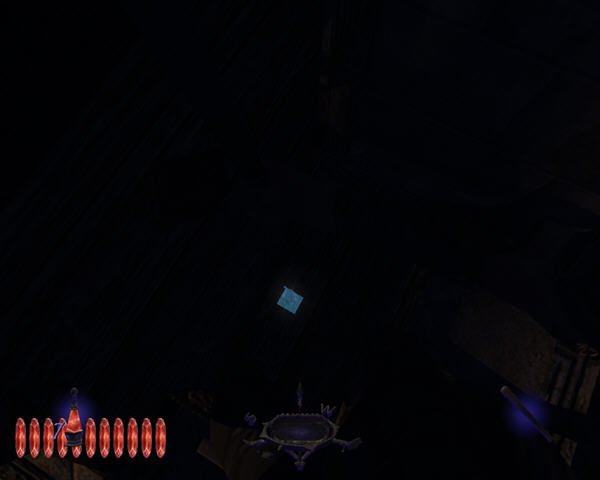 I find the missing treasure I’m after back in the barracks in a chest I’d somehow failed to see first time around. This contains the last of 3 special loot items I had to find and also takes me over the 90% to complete the mission. I leave the way I came in and wake up back in my house.

After not enjoying the last level especially, this was much more like it. Finding 90% of the treasure should be about exploring the whole map, not spotting invisible items in the dark which is what happened in the last level. The downside was that I got through this one extremely quickly. I get the feeling that if I sat down to play this game as quickly as possible, I could probably finish it in one go. That’s not likely to happen for now though as I’m short on time this week. I’ll be interested to see what the keepers have to say next as so far the game has just been building up to the main plot. I’ve listened to some conversations about the hag the inspector is looking for, the quarantine in the city and a boat arriving carrying something dangerous which are hinting at what is to come but I still don’t know exactly what crisis it is that I’m going to have to solve. I’ve also noticed a faction value in my stats which suggests that I get to pick sides but there hasn’t been a side to choose so far.