I’ve got more scans from Games Machine magazine today. First up is Times Of Lore on the Commodore 64. It gets a middling sort of review. I’ve never played this version but I can imagine the C64 struggling to run the game so it was probably better suited to the PC.

I’d give it around the same score myself having said that. It’s not a bad game as such but the most significant thing about it was the influence it had on the interface for future Ultima games. 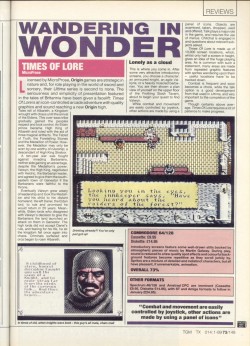