It’s fair to say that the Apple II never made much of an impression here in the UK with its hefty asking price and a burgeoning computer industry of our own in the 80’s. It was the starting point in the career of many veteran developers in the US however with Richard Garriott and Origin of course being included in that list. Origin continued to develop for the Apple II as the primary platform until around 1990 when the switch was made over to PC with Ultima 6 and Wing Commander heralding the new era. I’ve been looking for an Apple II of my own for a long time to try some of these early titles for myself but finding them over here at a reasonable price is nearly impossible. In the end I gave in and imported a IIGS which didn’t cost too much on its own but by the time I’ve added in the various accessories (keyboard, mouse, flash drive, disk drive, power converter, Mockingboard reproduction card, memory expansion card, parts to make a SCART cable, and lastly getting the motherboard repaired), I reckon I must be getting on for the price of a PS4. I’ll refrain from doing this bit of maths in case it’s worse than I think but I can see why there are so few of them over here.

The IIGS was the final variant of the Apple II series coming out in 1986 two years after the Macintosh. The GS stood for graphics and sound with the GS supporting a 12 bit palette of 4096 colours up to a resolution of 640 x 200. Only 16 colours could be shown at once without CPU intensive scanline palette swapping techniques but this still put it ahead of most of the competition back in 86. It also supported wavetable music which is of surprisingly high quality. As so often with Apple the pricepoint was well outside of the mainstream consumer and the main client remained schools with one of the key selling points here being that it retained compatibility for previous Apple II software.

Memory expansions and processor accelerator cards added to the longevity of the IIGS with cards available to more than treble the speed of the original 2.8Mhz processor. The IIGS ultimately found an extremely loyal fan base and was still being used by many people up into the mid 90’s when Windows 95 and it’s ilk finally conquered the world. This led to the final official port of Ultima 1 coming out in 1995 for a variant on the machine it had originally been released on 15 years earlier.

The IIGS port was programmed by veteran developer Bill Heineman who had previously worked on the Bard’s Tale series among numerous other titles. Bill had already ported other classic titles to the IIGS such as Out Of The World/Another World and used the same team small team for this project. These games were only sold directly through Vitesse for a brief time and later through Shareware Solutions until the all too early death in 2010 of Joe Kohn who ran the company. The rights for the software reside with Rebecca Heineman these days and while it will hopefully see a new release eventually, it is unavailable for the moment. 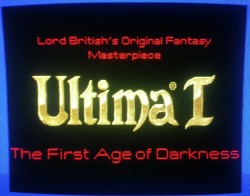 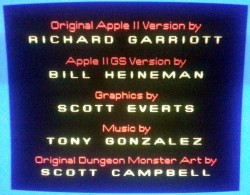 The first thing I notice on loading the game is the musical score created specifically for this version. It includes original pieces for map travel and the title screen as well as more familiar tunes such as Rule Britannia in all the castles and what I think is Bach for the dungeon music. The dungeon music in particular sounds great with the IIGS doing a good job at reproducing a pipe organ. There isn’t a whole lot of different music but it’s a welcome addition to the silence of the original and fit’s in with the theme. The introduction graphics of both the original and remake versions are both missing with only a couple of screens of text in their place. 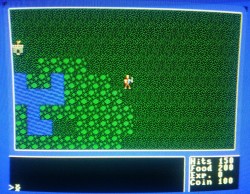 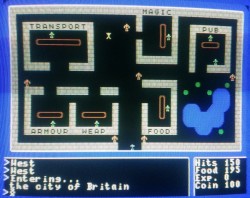 The tileset has been given a lick of paint but is instantly familiar with the towns barely any different in appearance to the 1986 remake. It’s surprising that these weren’t changed more radically but this port has clearly gone for being faithful to the original in preference to major upgrades. All the keys are identical to every other computer version with no attempt to shoehorn in mouse control.

After buying a new weapon, I head straight for the nearest dungeon to kill some monsters. The dungeons have retained their wireframe graphics but do have full colour critters instead of the stickmen originals. Unlike the last port I played on the PC-98, these scale appropriately and they go some way to bringing the dungeons more up to date. I am surprised the walls weren’t textured also given that this was 1995 but there are some digitized samples when hitting or being hit during battle to replace the originals beeps. I’ve included the usual bestiary below of everything I’ve run into so far:-

At first glance the gameplay doesn’t appear to have been altered but I’m soon finding myself struggling to progress. The creatures in this port deal out far, far more damage than any other version I’ve played. This damage appears to increase the lower down a dungeon you go. I was finding myself unable to go past level 2 for fear of not getting back out again. This improved to a degree once I got some better equipment and raised my stats but with the best equipment in the game I’ve still been hit for over 400 points of damage in one hit by a lich on level 8 of a dungeon. I’m finding it difficult to the extent of being close to broken with my only chance of getting in and out of the lower levels being loads of ladder spells. I’m coping but it’s certainly adding some challenge to proceedings. I could normally blast through Ultima 1 in an hour or so but I’m many hours past that already without the end in sight. 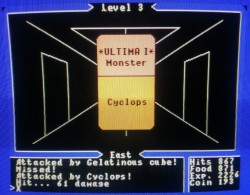 Talking about broken dungeons, some of the monsters don’t have any graphics such as the Cyclops above. This doesn’t stop me shooting at them but I am wondering if the version I’ve got is slightly unfinished. It’s the only one I’ve got though so I won’t let it put me off. 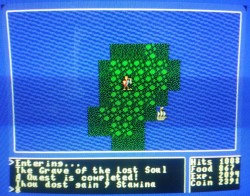 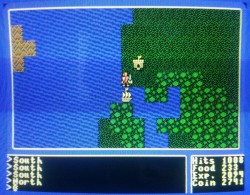 As for other differences, I was unable to buy an aircar anywhere on the starting continent despite levelling up to level 3 (which has always worked in the past). I ended up having to buy a frigate first and go elsewhere. Also, the signposts which raise stats would previously do so by an ever increasing amount as you got nearer 99. Here they work the opposite way around and raise by decreasing amounts.

I’ve been finding so far that the easiest way to raise money and HP is to continually rescue princesses from castles. This has the downside of potentially getting a key for the wrong room when killing the jester but there is something strange going on with the randomization of this. It quite definitely goes in long streaks where I can continually raid the same castle and always get the right key (or vice versa). Once on a roll this is a very quick way of raising several thousand in gold.

The ultimate aim of all this is to survive in a dungeon long enough to kill a balron which could prove quite the challenge given just how lethal the dungeons are proving. I expect I will have to max out on hp before entering to have much hope which requires plenty of cash. I’ve got as far as completing the other quests and getting all my stats into the 80’s or above so it’s the last job before I think about heading for space.

I’ve not quite made my mind up about this port yet. I like the monster graphics and the new music but the difficulty has arguably gone a little overboard. Maybe this was a deliberate choice to lengthen the game for the veteran Ultima fans who were presumably the main audience? If that was the aim, I’d perhaps like to have seen an extra digit on the stats or maybe a reworking of experience so that it actually contributed somehow. As it stands, there isn’t a whole lot I can do to cope other than increasing HP which means lots of grinding. I’m being spurred on by the curiosity of finding out if space will have seen any upgrades but I don’t like the thought of having to build up all that HP again for the final battle. I’ll feel some accomplishment when I beat this game anyway which should be coming up in part 2 next week.