I started out part 2 continuing to rescue princesses and raising my HP to a state where I felt I could survive long enough in a dungeon to bag a balron. This only required about 20 minutes of grinding so wasn’t too arduous and the amount of HP and especially gold I got returned on exiting the dungeon does appear to have been raised in compensation for the difficulty.

The balron was another dungeon creature missing its graphics but I did spot another couple to add to the menagerie, including one for you Zorn fans:- 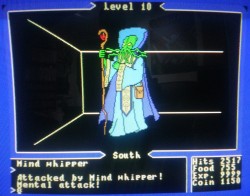 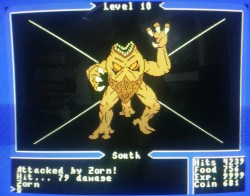 With all the gems in hand, it was time to head for space at last. As so often in all of these ports, this section of the game is little different to the original from 1980. The graphics are a little more colourful but in space no one can hear your IIGS playing MIDI music as there isn’t any. There are a couple of sound effects when docking and shooting but that’s about it. 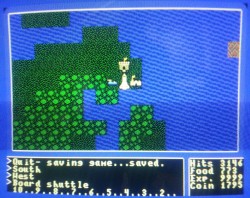 The TIE Fighters of the original look more like the advanced TIE in this port and are considerably easier to hit with the fat round body shape. On my first visit, I literally cleared space of all enemies and still didn’t get the 20 kills required to become a Space Ace. Maybe this can happen on other versions but I’ve not seen it before. I had to land, get enough money together to pay the docking fees again and head back to space a second time. As luck would have it, the invading aliens had been busy in their shipyards and I could grab the missing 3 or 4 kills required. 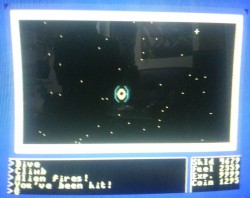 Back on the ground again, I’d had plenty of practice rescuing princesses so one more to get the time machine wasn’t going to be difficult or at least that’s what I thought:- 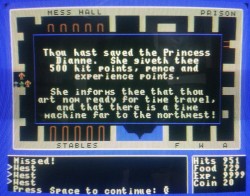 This first part went OK but was followed by a scouring of every part of the map looking for the time machine and not finding it. I tried rescuing all the other princesses to see if that would help and searched again to no avail. I can only assume that there is a bug in this port which can stop the time machine appearing and since I didn’t fancy starting from scratch, this playthrough has come to a slightly premature end.

I have seen this described as the best version of Ultima 1 and while it has plenty of good points, I would have to go for the FM Towns version instead. That has the advantage of intro and outro graphics, textured dungeons and no game-breaking bugs that I’m aware of. It has the disadvantage of sharing the music and graphics with 2 & 3 on the system but judged on its own merits has to come out on top as far as I’m concerned. I especially don’t like the fact that the dungeons on the IIGS are dangerous to the point of being unexplorable to any great depth. The use of ladder up/down spells should be optional in my opinion.

I would of course still like to see the ending of this and I expect there will be a part 3 eventually. If anyone happens to have a save game at the end and would like to send it my way to speed things up, it would be appreciated. Failing that, the next game on here and one I’m really looking forward to will be Ultimore – A World Divided.