I was hoping to make the next game on here the IIGS version of Ultima 1 but my IIGS needs some repairs doing which are beyond my capabilities so I’ve had to send it off to a professional. I don’t expect I’ll be getting it back too soon so I thought I’d have a quick blast through the PC98 version instead. This port was released in 1988 in Japan and later included with the anex86 emulator on the Japanese Ultima collection which is the version I’m going to be playing. It is almost entirely in Japanese but I was confident this wouldn’t make too much difference as I know my way around Ultima 1 well enough by now. 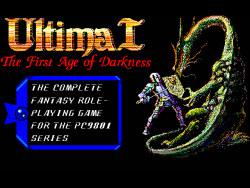 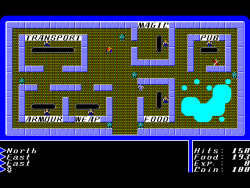 The high resolution graphics of the PC98 are immediately apparent when starting this up with far crisper graphics than you would get in the usual Western versions. The underlying worlds and towns appear to be entirely faithful though and it’s close to playing a skinned version of the original. Character creation was the same as DOS except I couldn’t find a way to name my character and ended up playing the game as AAAA. 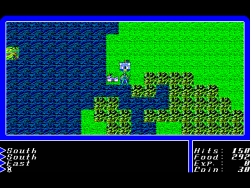 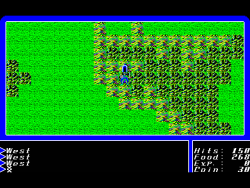 Exterior graphics use an all new tileset which is a whole lot more colourful than I’m used to, if still equally blocky. It’s not entirely unfamiliar as it’s the same tiles that were used several years later on the FM Towns port. The FM Towns had considerably more colours available however so there is some dithering evident here. It doesn’t have the music of the FM Towns port and there isn’t any sound to speak of throughout the game, at least on the emulator I was using. 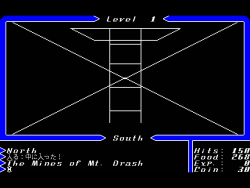 I headed for the nearest dungeon which on first viewing don’t appear to have been upgraded at all. In fact the edges of the corridor meet in the middle here making it look infinitely long which is something of a downgrade. Differences do become apparent when I come across my first monsters, a small bestiary of which is shown below:-

The monster graphics were also used in the FM-Towns version but again these are dithered with the reduced colours. One oddity of this port is that the sprites only have two sizes but still show at all distances, so if there is a chest at the end of a long corridor it looks the same size however far away you are until you are standing on it. This gives the impression that it’s running away from you when you walk towards it and is a little disconcerting. The engine also can’t cope with drawing one sprite behind another (unlike the Apple II original). If a monster is standing on a chest, you can’t see it and will only know it’s there when you start losing hitpoints. 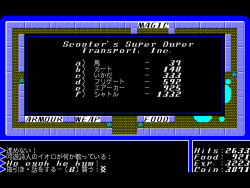 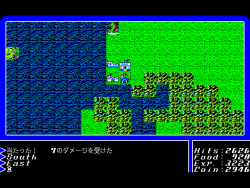 After gathering enough gold to get an aircar, I set off around the map finding signs to raise stats. The shops in this port are far, far cheaper than I would expect with a space shuttle only costing 1332 and the aircar less than 1000gp so I may have been able to do this sooner. 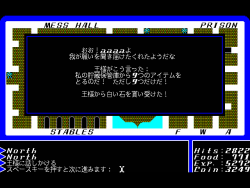 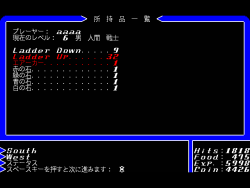 Completing quests for the Kings was interesting when I couldn’t understand what they were telling me. I ended up queuing all 8 quests up and then going on one big dungeon raid to complete those 4 together. Curiously all of the magic spells are in English so I could use ladder up and down without having to work out which it was. 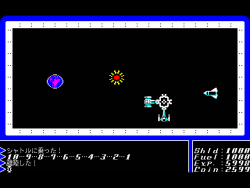 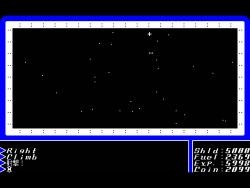 With 4 coloured gems safely in hand, it was time to achieve space acedom. The overhead view is a little more colourful but this section of the game is largely unenhanced other than the higher resolution. I would say it was markedly easier and I was only hit once by any of the TIE fighters. The difficulty level throughout does seem to have been edged a little lower in this version of the game. 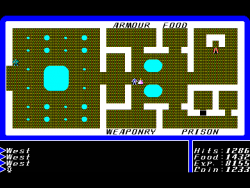 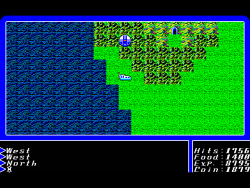 Once I’m a space ace, I slaughter all the guards in the nearest castle and rescue the princess. After heading back in and being healed up by a very forgiving King I locate the time machine and climb in for the final confrontation with Mondain. 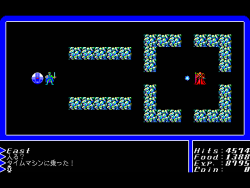 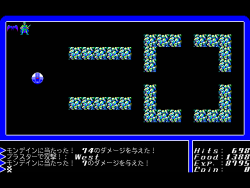 I’m a long way from maxed out for this final battle as I’ve just been speeding through this relatively quickly but Mondain falls quite quickly. Once in bat form he does prove to be particularly elusive on the PC98 but I get enough hits in after chasing him round for 5 minutes and am presented with :- 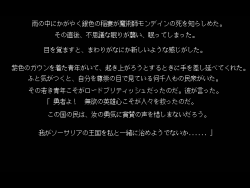 a screen of Japanese which doesn’t mean a whole lot to me followed by some credits.

As for a final verdict, I’d have to say the FM Towns port was more fun with the advantage of being considerably better looking and sounding, not to mention being mostly in English and having intro/outro graphics. With the limited colours, I probably prefer the look of the original 8 bit versions over this in some ways. They all play about the same though apart from the quirks with the sprites used in the dungeons of this port which were a definite detriment to gameplay. This can’t be right when the original could manage better on much more primitive hardware. Other than that, it’s decent enough if you can cope with the language barrier and want a little more colour in your Ultima 1 but on this occasion I don’t think those of us in the West missed out on much.