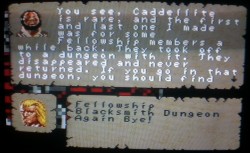 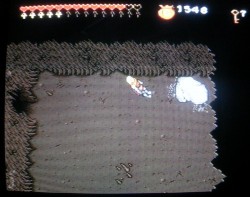 I head to Minoc to ask around about getting a Caddellite helmet. As luck would have it, the blacksmith has already made one but some Fellowship members took it into a dungeon and I have to go and get it. As ever, I have to fight a dragon at the end of the dungeon after which the helmet is underneath a giant boulder in the corner of the same room. 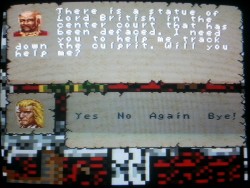 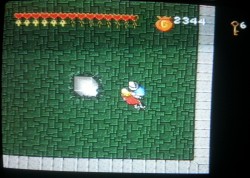 Wearing my protective head gear, I can now attend to the final generator which is in a dungeon near Serpents Hold. I take the chance to look around the island while I’m there solving a side quest to track down the defacer of a statue of Lord British. The quest is the same talk to everyone in the right order routine that I’ve seen in just about every other town. Since Serpents Hold consists of 2 buildings and roughly 4 people it’s done in less than 5 minutes and I get some magic armour for my efforts. The dungeon doesn’t take a whole lot longer and I soon have the final generator dealt with. 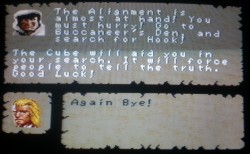 The Time Lord sends me off to Buccaneer’s Den where I should now be able to get the Fellowship members to tell me the truth thanks to the cube I recovered destroying the final generator. I loved being able to get confessions out of all the Fellowship members about what was really going on in the original Ultima 7. This is “slightly” cut down here and only affects 2 people that I could see. All they do is point me toward Hook’s quarters where I find a note saying that he is now on the Isle Of The Avatar. On Buccaneer’s Den I can also gain access to the House Of Games here which is a giant multi-level dungeon that appeared to serve no purpose whatsoever other than keeping me occupied for 20 minutes. When I eventually get out of it, I’ve gained little but my Avatar has made it to level 8 at long last. 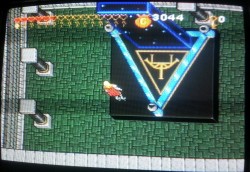 I head for the Isle Of The Avatar to wrap things up. There are a couple of buildings on here with their own mini dungeons which initially distract me. When I’ve figured out that these aren’t where I need to be, I find the dungeon I should have headed for in the first place further to the North. This has lots of locked doors and not so many lockpicks and I end up being low on magic for much of my trip through it with all the unlock spells I have to cast. My mana does recharge over time but I keep having to leave the game running for a few minutes while I wait which didn’t make for the most thrilling of finales. When I do discover the black gate, the climactic fight is done entirely in the dark as I don’t have any magic to cast illumination. 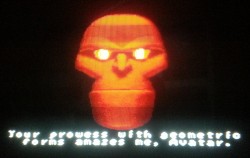 Batlin escapes but the battle goes well otherwise. After waiting a little longer, I can shed some light on the room and discover the black gate. I place the shapes in the appropriate corners of the triangle surrounding this all the while getting ludicrous taunting from the Guardian. 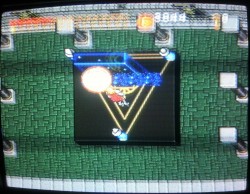 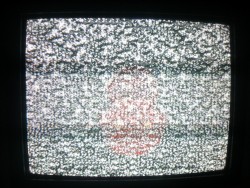 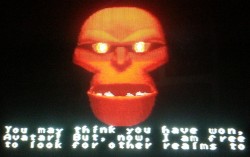 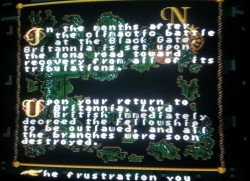 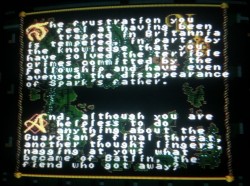 I then have a choice as to whether to return through the gate or destroy it. If I could have saved my game and tried both, I would have done but since I’d have to replay the entire dungeon I instead go for the appropriate Avatarly option to destroy the gate thus trapping myself in Britannia.

Ultima 7 is a game I’ve always wanted to return to and play through again but the SNES version hasn’t fulfilled this. There just wasn’t enough of the original here for it to be the same game. Whether it deserves its terrible reputation depends on your point of view though. Anyone who bought this expecting a port of PC game (which would hardly be unreasonable) would have been sorely let down. Putting the original game and the rest of the series to one side, I’ve had a decent enough time with it. The combat is silly but quick and simple so it doesn’t get in the way. The dungeons where I spent most of my time offered a puzzle/exploration side to the game which worked reasonably well. Combat aside (never a highlight of U7 in any version), the game engine appeared to be capable enough and worked well with the SNES controller. I could have lived without the constantly respawning creatures but other than that I think this is a passable hack and slash RPG-lite. It should have been a lot better but there were plenty of games on the SNES that were worse than this.

I’m curious to know what the story behind the port was and whether it was deliberately simplified to this extent or a consequence of time/budget constraints. I had a browse through a load of the Point Of Origin magazines to see if there was any info but it barely gets a mention. I did find references to U7 SNES going into testing in July 93 + being signed off about a month later. After that it doesn’t seem to be referred to ever again as far as I could see at least up until late 94 when I gave up looking. It’s the same for the other SNES games from around this time which does give the impression they were very much in the background compared to Origin’s PC products. The 3DO and Super Wing Commander also got a huge amount of coverage over this time period with Origin looking to be seen to one of the leader for what was purported to be the next big console at the time. There was a small article about focus groups with Billy Cain (who also worked on U7 SNES) in which he talked about using focus groups when testing Metal Morph. He isn’t specific but mentions “the kids in our group” which possibly says something about who these games were being aimed at. By contrast, the following year several people were chosen to test System Shock from Austin residents who had previously filled in Underworld registration cards – the average age of that group was 29.

It may not be mentioned in their newsletters but Origin did continue with SNES development long enough to create the Savage Empire port after this which used the U7 engine. With the smaller world and limited number of NPC’s, I can see how that could have worked out quite well. I’d certainly like to play it were it to be available in English so I hope that translation is coming along but I’ve not heard anything about it in months. In the absence of that, the next game on here is likely to be something on the Apple II (if Parcelforce ever get their act together and deliver the CFFA3000).