I’ve had a couple more sessions at this in something of a concerted effort to get my coffee table back again. 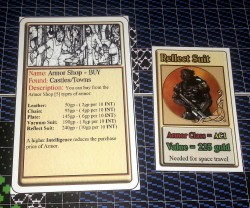 I began by heading off to buy some armour at long last. The price doesn’t drop much despite my new found intelligence but I can hardly complain at the price for the best suit of armour. The armour class of 1 means any attacking creatures now have to roll 7 higher on the D20 before they can score a hit which is going to make a big difference to my survival chances. 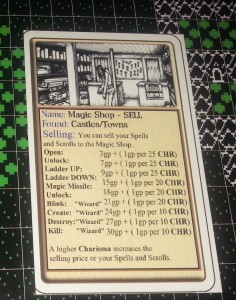 I spend my remaining money across Britain and Yew on a little food and a small pile of ladder up and down spells in preparation for the coming dungeon crawling.

I visit the two local lords to take on both quests available in this realm, although I’m not sure quite how the signpost quests are intended to work here as I can’t spot anything in the manual about how much they would raise my strength by or which signpost to head for. Without that particular stat contributing in combat, there isn’t the incentive to raise it anyway so I’m going to concentrate on the creature quests one at a time. 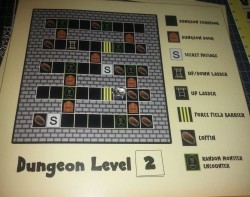 Something which hadn’t occurred to me  with the random nature of the dungeon levels is that the ladders end up being in the same places on the random levels in order for them to meet up. This can make it very quick to skip up and down levels depending on how they work out. Regarding locked doors and trapped coffins, there is only a 1 in 6 chance of either. However both can be bypassed without even rolling if you have 80 or higher agility which I happened to get to when raising intelligence in part 2. This makes agility the most useful stat in the game and it came in extremely handy that I’d inadvertently raised it by that much.

I decide to work my way down the levels the long-winded way and the monsters get progressively tougher. A couple have some additional features like the gelatinous cube which will eat your armour if it scores 3 hits. It also happens to be the object of my quest and luckily for me goes down before it can get that 3rd strike in. 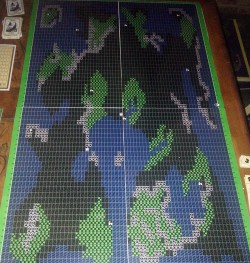 From here it’s onto a fresh monster free continent and a quest to kill a Lich. All the monsters on the previous continent vanish when a boundary is cross other than sea monsters which could potentially follow me if my table was big enough for more map pieces but since it isn’t they are vanishing here also. 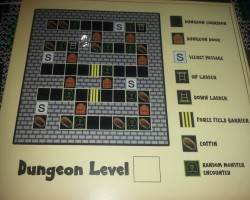 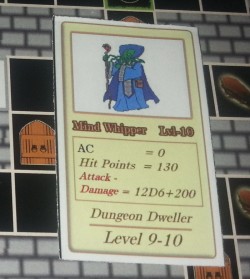 On my route to the Lich, I notice one of the dungeon maps has two ladders up and none going down which can’t be right. I use up one of my ladder spells to get around this. For some reason I’m expecting the Lich to be in the level 9-10 monsters so I foolishly take on a couple of these behemoths before I realise my mistake. The mind whipper above is no more than average for those floors and deals out some serious punishment before I run away. I do still have enough health to take out a lich on the way back up and escape the dungeon with a pitiful 100 or so HP left over. At this point I take the trouble to add up all the HP of the downed monsters and realise that I’ve gained a full 3 levels in the process. You really can rack up huge XP on the lower levels in these dungeons. 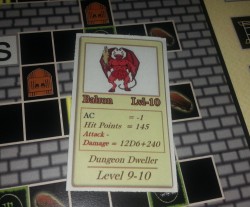 Onto the next realm and those extra levels come in extremely handy on my quest to defeat a Balron. I take the easy option this time and ladder down and up most of the way. 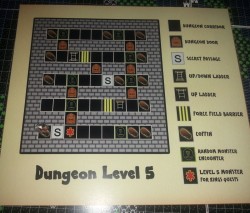 The final realm isn’t going to prove much of a challenge by comparison. I notice a level 5 monster quest square on the level 5 map at this point which I’m not sure about but I ignore it and soon kill my carrion creeper and bag the final gem.

My fighter is now up to level 8 and closing in on being ready for Mondain. With no spacefaring in the boardgame for now, I look to be all set to finish this up in part 4.

The dungeons have proved to be my favourite part of the game so far. The level of challenge scales nicely throughout each level with levels 9-10 enough to make even the most experienced character wary, whilst also offering enough reward to make it worth the risk. It’s possibly a little too much reward, three of those balrons would be about enough to raise my character a level on their own. Then again I possibly shouldn’t have that blaster I’ve been using. I’m not so sure about the secret walls. With only a 1 in 6 chance of actually being able to see them it’s not worth the detour as a rule so I’ve just been ignoring them but at least the option is there. Above all the dungeons just work well as a board game without too much unnecessary stat keeping. I simply have to draw a monster card and fight that monster without any faffing unless I decide to run away.

I’m less convinced by the overworld in this form. It’s fine in the early stages on foot but now I have an aircar and can travel 4 times faster than any monster there seems to be little point to generating the random monsters and therefore doing much more than moving my food counter down. This is especially true now that at level 7+ three monsters are being generated for every 10 moves. I just don’t have the patience to keep track of them all when I’m not intending to do anything other than avoid them. I could imagine the monsters quickly building up until the map looks something like the time of legends in Ultima 2 except I’d have to move every monster by hand. Those who are more into their boardgames may well feel differently to me but it almost renders the boards for the other 3 maps moot. Perhaps the aircar needs to be held back until much later in this version so that the player has to work with a boat for a while and travel the land on foot. To go with this, I’d much prefer to see the monsters level up instead of numbering up perhaps with extra sets of wilderness monsters for correspondingly higher character levels.

Alternatively to level matching monsters, I quite like the idea of having a different set of cards for each land so that some of the realms are more dangerous than others. Of course I always liked RPG’s where some areas were shown to the player early in the game but really off limits due to their difficulty. It gives a clear goal to work toward while still keeping an open world for the more foolhardy. I know others don’t always feel the same (for a prime example see Spoony’s Ultima Underworld 2 review) but if nothing else it would make the Lands Of Danger and Despair a lot more fitting of the name.