The first task today is rescuing a princess, so I head straight back into the castle I got the last gem from and for the first time set the board up as appropriate with all the guards dotted about. 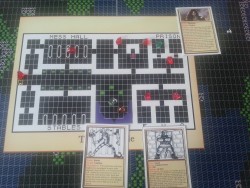 As soon as I kill the jester, the guards start making their way towards me. I’m taking the approach that they are as dim as their PC brethren and will always head towards me in a straight line, trapping themselves in corners and the like. This still doesn’t make this part of the game easy. On the PC they only track toward me when I get close enough so some are easy to avoid. Trying to stay out of their way here is a dead loss and about the best I can do is fight them one at a time.

The guards card doesn’t tell me what armour class or level they are so I had to guess. Given that they have a monstrous 500 HP, I took them to be level 10 and AC 0. The 500HP takes some whittling down even with the equipment I’ve got and these battles soon start to hurt. I get 1000XP for the privilege every time so my level does get maxed out rapidly. By level 10 I score a hit every time without needing to roll which is just as well against these guys. 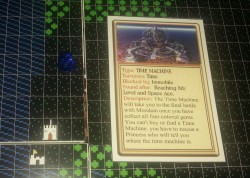 Having fought off the pack of ravening guards, the keys taken from jesters work a little differently here. Killing the jester gives me a 1 in 8 chance of opening the lock imprisoning the princess in this castle. If that doesn’t work, I can go to another castle and kill another jester with a 2 in 8 chance and so on. It does beg the question if I could just go round all 8 castles with that first key and not have to deal with the wrath of the guards for killing jesters but I don’t think that was the intention. I eventually get a key that works by castle 5, rescue my princess and bag a time machine. I spend my remaining gold on HP getting up to about 5000 hoping that will be enough.

Something that did occur to me here was that my character would now kill all level 1 dungeon critters in the first round of battle offering a zero risk means of rapid gold farming should I need it. I preferred to press on to the conclusion instead. 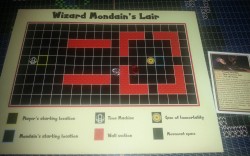 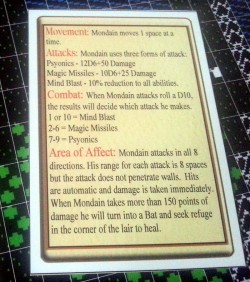 The final battle takes place in the familiar surroundings of Mondain’s lair. He has a range of attacks all of which hit automatically but don’t take effect through walls so I sneak up on him and we each face off on opposite sides of the wall.

The moment I step into the gap he starts hurling spells at me, none of which are quite as nasty as I’d feared they might be. This is especially true of the mind blast spell which knocks 10 percent off my abilities but doesn’t affect my prowess in combat in the slightest.

Mondain doesn’t have an armour class so I’m assuming 0 again which still means I score a hit automatically every time. As such it doesn’t take many shots to do the 150 damage needed for him to morph to bat form and flap his way toward the nearest corner. 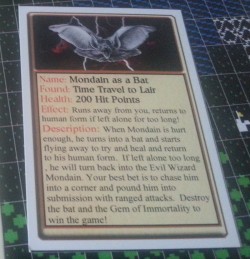 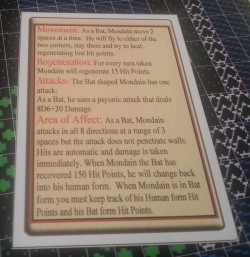 I take the chance to destroy the gem doing myself 2000 HP of damage in the process then head for Mondain who is about to start regenerating. I don’t have to chase him around the map for once and we trade blows. He needs 10 turns in the corner to turn back into a human but he doesn’t get the chance as I finish him off with time to spare as shown in the traditional triumphant screenshot at the end:- 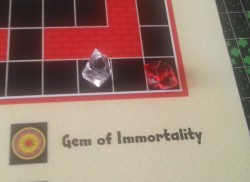 Maybe not that triumphant then. I’ve played plenty of video games where the ultimate ending is anti-climactic but little to match this as of course there is no ending once Mondain is defeated. I just get the satisfaction of reclaiming my living room from the invading army of boards, cards and dice.

I should offer a final opinion of the game at this point but I’ve never played anything like this before so it’s not easy for me to be objective. I’ll have a stab at it anyway but I should first mention that the game is still in playtesting and will evolve from the version I’ve played here. It could do with some tweaks and fixes but having come this far these would all be fairly minor.

Judging the game in it’s current state, I certainly went into this wanting to like it but in all honesty I’d never have made it to the end if I wasn’t obliged to Joseph having promised to playtest it. You have to respect any fan project where someone has put this sort of effort into something just for the fun of it but I’ve simply spent way too much time pushing bits of coloured glass around this last week for my liking.

It’s perhaps the solo nature of the game as much as anything. I always think of board games as a communal activity. Spending this much time playing one on my own doesn’t strike me as something I should be writing about in public. I can’t honestly think of anything I would ever actually do that would be more embarrassing to have to explain were some random stranger to catch me in the act.

That isn’t to say I’ve not had some fun out of it and the time has passed strangely quickly whenever I’ve been playing. It doesn’t even come close to the more arduous games I’ve blogged through on here but I have been taking more and more shortcuts as the novelty wore off. The ability to change the rules is certainly one advantage of this form of gaming.

No one will be surprised that I’m not about to recommend that every Ultima fan should rush off and play this. I expect any reader will already know if this sort of game would appeal them and if it does sound like your thing then once it’s had a few tweaks, I don’t think you would be disappointed. As for myself, I intend to steer clear of anything to do with dice for the foreseeable future.

I have to offer a huge thank you to Joseph Propati for being generous enough to send me this and of course creating the game in the first place. Whether it’s my cup of tea or not, I simply love the fact that this exists at all and it’s projects like this that have kept Ultima alive for so many years. This will be forming a welcome addition to all the Origin trinkets I’ve accumulated as soon as I can figure out where to put it.