I decided to have a concerted effort to finish off Ultima 2 last night. The first thing I discovered was that my save game wasn’t quite up to date for some reason and I had to go back to raising money again before I could use the quicksword. After 20 minutes more of this, I was ready for the dungeons again. What I hadn’t considered was that since I’m playing a fighter, I’m not allowed to buy spells in this game. This meant that I was going to have to fight through all 16 levels and back again to get the tri-lithium. 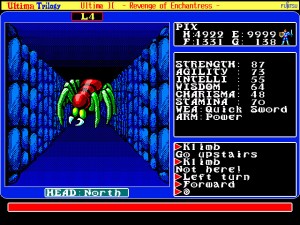 I tried one of the towers first. This had plenty of ladders going up several levels at a time which made rapid progress to the top possible but I was forced to go up and down again on some of the high levels. The monster respawn rate on these higher levels was insane to the point that I’m wondering if it was a bug with the emulator. They would literally be respawning so fast in front of me that I could hardly move around. If I had been trying this with a less powerful character, I’d have died in no time. 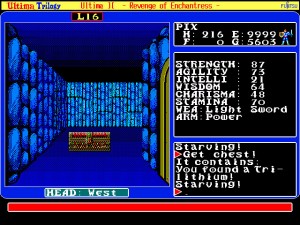 As it was I just about made it to level 16 which was full of chests containing tri-lithium but gremlins had stolen all my food by this point and there was no way I could have made it back out. I tried this tower several times before giving in and going for one of the dungeons instead. This time I couldn’t skip any levels with no ladders bridging more than two floors. There did seem to be slightly fewer monsters though and I just made it back out again. I would definitely recommend having a character with some magical abilities if you ever play this game from my experiences here.

The dungeons don’t quite play the same as Ultima 1. There are no force fields, no trap doors, I can’t search walls for doors and most significantly the monsters move around. I recognised the majority of the monsters but I’ve included screenshots of those I didn’t recall seeing last time around. 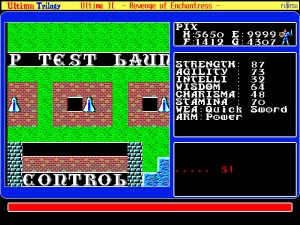 I’m not short of cash after fighting through 100’s of monsters to get a few precious chunks of tri-lithium. I stock up my character again, steal a plane and head off to borrow a space shuttle from the future USSR. 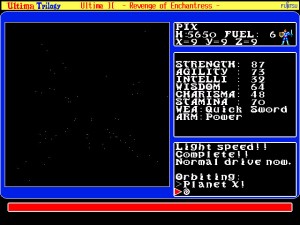 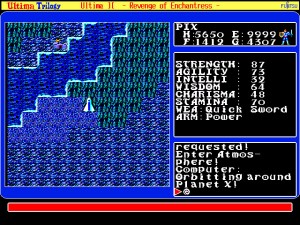 I quite fancied exploring the solar system but I was running out of time so I headed straight to planet X. It’s a pity with Ultima 2 that more wasn’t made of all the planets as it should have opened up the scale of the game rather than being an optional (and ultimately pointless) extra. At least when I get to Planet X, it does actually look quite different to Earth with a very blue tint. 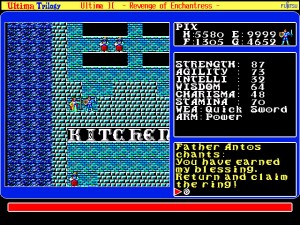 Once here, it’s straight to Father Antos who gives me his blessing. 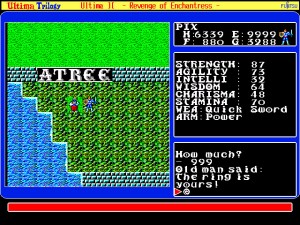 Then it’s back to Earth again, to pick up the ring from the old man under a tree.

On a side note, while travelling around I discover a sign with an Easter egg of sorts as reading it gives some credits for this version of the game. 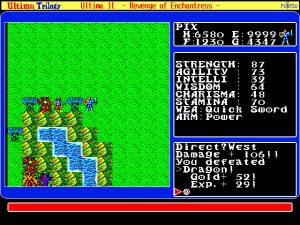 I’d been completely ignoring the time of legends so far but I head there to clear out all the monsters before attempting the final assault. Rather than massing around the entrance with the timegates, they are instead congregating in the middle of the map around the castle. New monsters spawn in about as fast as I can kill these off but most of the new ones are far weaker and I whittle the numbers down eventually. 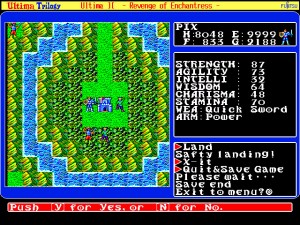 After a march back to Britain, I pay LB enough times to get my HP up to 8000 and then head back for the final assault. 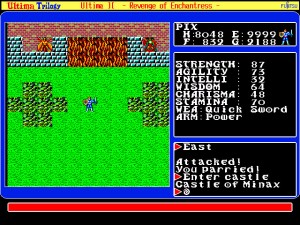 The music in the castle doesn’t seem too appropriate as it’s the same jaunty town music I would have got in New San Antonio. It hardly creates the appropriate atmosphere of dread. The castle itself is just like in previous versions except without the unkillable monsters. The force fields look more like lava but the ring has the same effect of keeping me safe walking through them. 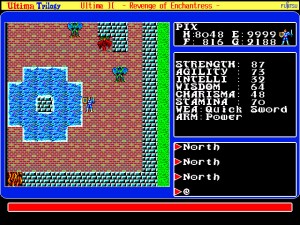 Minax is in her usual hangout in the top right of the level. She takes exactly 100 points of health each move once I get within reach, and vanishes to the other corner of the map when I get a strike in. 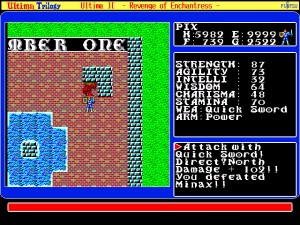 After clearing out the various monsters, this final battle becomes a formality as I walk back and forth across the map. Compared to the dungeons this place is a walk in the park and I really didn’t need all those HP’s. It’s quite an anticlimax really and was tougher on the PC.

With Minax’s death, the CD music kicks in and I’m treated to a handful of static screens for the winning sequence. Unfortunately, the text reverts to Japanese so I couldn’t read a word of it.

This has certainly been a better looking version of U2 than I’m used to although the novelty has worn off with so many shared resources with Ultima 1. I don’t know if the better graphics are entirely a good thing as it does feel less epic when less is left to the imagination. The changes to the gameplay made it a more challenging game though and it’s good to see a purpose to the dungeons. My only real complaint is the monster respawn rate which was crazy throughout. If this is carried into Ultima 3, it could be nightmarishly difficult.

Despite its quirks this is still the best Ultima 2 I’ve played. If I was recommending a version to anyone who has never played any of the games, I’d point them at this. With Ultima 3, I’m not as convinced that there aren’t better options but I’ll give it a try in the near future. I’ve heard that it has the same music as the rest of the trilogy and I need some time off before I hear that overworld music again. It will be Wing Commander 3 on the Playstation next.