It’s been a strange sort of week where I’ve struggled to find any time to devote to the blog. Not the least of my problems has been that I was interviewing yesterday to hold onto my current job amid the current wave of redundancies where I work. I’ll find out next week whether I’m one of the ones leaving and if so would be out before the end of the month. I’m not so sure I wouldn’t be better off with a move in all honesty although this wouldn’t be the time I’d choose to be job hunting. I’ll deal with that if and when it happens anyway. If it goes quiet on here at the end of next week, you can safely assume that I’m devoting all my spare time to sorting out another job.

In better (and more on topic) news, my second parcel of Origin stuff is finally on its way over from Austin. This contains all the larger items that would have been way too expensive to send via conventional means. I should have been picking it up from the airport Saturday morning, but for some reason it didn’t get loaded on the connecting flight and is currently stuck in Atlanta. After what must be 5 months setting this up another couple of days is neither here nor there, although I may have to call in a favour since it’s going to be showing up when I’m working. Not having to go the airport did mean that I could get started on the FM Towns Ultima 2 at last.

Like it’s predecessor, Ultima 2 has a new intro which is run as a separate executable on the CD. I can’t understand a word of it of course but it appears to show the Avatar being sent back through time to save Britannia via a conjured moongate. I’d be curious to know if there is some attempt here to explain it being set on Earth. 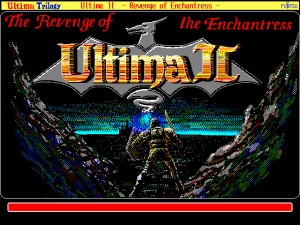 Luckily the game itself is in English and I can understand what I’m doing. It’s got another nice new start screen but other than appearance this is very much Ultima 2 as I’ve played it before with identical character creation. 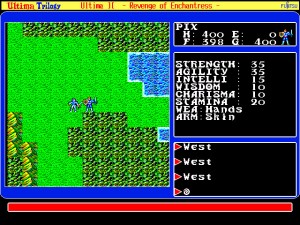 It doesn’t take long to spot some differences on starting the game though. Getting going is seriously hard as the monsters in the world map spawn extremely quickly and there is no holding back with some of the toughest creatures being thrown at me. It took me 6 or 7 attempts to make it to the nearest town with so many monsters that I was actually boxed in by them on occasion and unable to move. 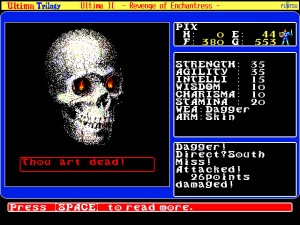 The death screen was all too familiar during these early stages and unlike Ultima 1 there is no resurrection. The game merely loads from the last save automatically. The graphics on this screen are straight from Ultima 1 and this applies to a lot of the game. As feared, Ultima 2 does have the same overworld music as Ultima 1 and it wasn’t long before I was playing without sound. 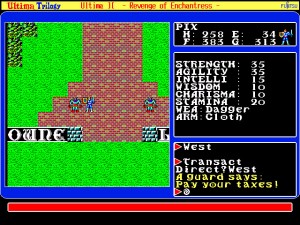 Once I’ve battled my way to a town, I find that the armour and weapons are much cheaper than expected and I can get my character quite well equipped. I can actually afford most of the best items immediately although my stats wouldn’t have let me use many of them. The towns are all close/exact recreations of the originals so I’ve no trouble finding my way around. 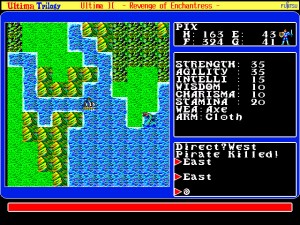 That leaves me with the question of how to go about gathering money to raise my stats. In Ultima 2, the key was sailing round and round the time of legends in a boat shooting everything with a cannon. This means getting a blue tassel by killing enough thieves and waiting for a boat to turn up. Surprisingly, I get a boat really early on in the modern-day world, only to discover that killing things with my cannon doesn’t get me any gold or experience in this version. 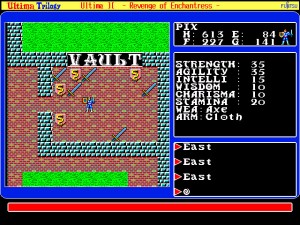 This calls for a change of plan and virtue goes down the drain at this point as I look for a way to grind myself wealthy. I discover that one of the oddities in this game is that the guards aren’t all that tough even to a starting character. This means that I can get a large amount of experience roaming around LB’s castle killing everything and everyone and I even get to raid his vault for some decent weapons and armour. Despite slaughtering the entire population of his castle, LB doesn’t hesitate to raise my hit points with my ill-gotten gold, just before I add him to the heap of bodies. 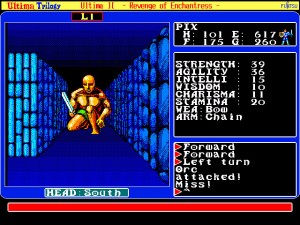 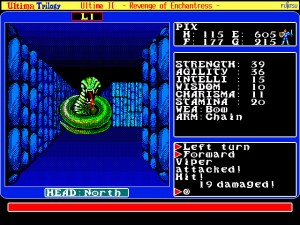 Everyone springs back to life if I leave and return to the castle which would make continual slaughters a very safe way to raise money. Only the guards ever fight back with the rest of the population being free experience and gold. Before resorting to this, I decife to try a tower or dungeon and head for the nearest one I can find to have a quick look around. These turn out to be near enough identical to Ultima 1. I spot a couple of new critters among the more familiar “faces” but I don’t hang around for long as it’s outright dangerous in there to my undeveloped Avatar wannabee. My HP aren’t increased on leaving the dungeons either and they clearly aren’t somewhere I want to be at this stage. 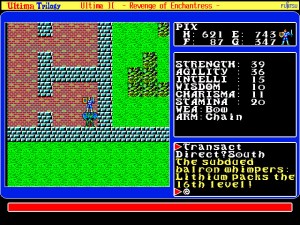 I return to my town raiding ways and after getting a good supply of HP and food continually raid New San Antonio clearing out the customs guards over and over. There are no invulnerable guards in this version and the fight is so easy I can often come out of it with more HP than I went in.

The clerk at the Hotel California behaves a little differently. I can offer him any amount of gold I like but from a few experiments he appeared to raise a stat by 1 if I offered him 101 gold or more. When I paid 500, I still only got a 1 point rise so I gave in on that and just went one point at a time. From what I saw, which stat is raised is truly random and not done on the number of moves like it was on the PC. 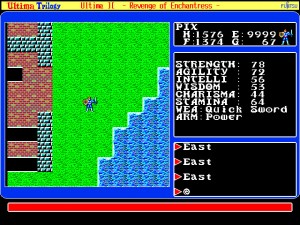 After about an hour of mowing down the residents of Port Bonafice over and over, I’d finally got my character to a stage where I can equip the quicksword and wear the best armour. I figure that this has to be good enough for now and I’ll attempt to beat the game from this position if I can.

I can’t say this has been as much fun as Ultima 1, as it’s really just been a case of mindless repetition for 90% of the time I’ve been playing it so far. There was plenty of that in Ultima 1 but it was still more varied than this. Things should start to pick up now and I’m interested to see what the planets are going to look like when I get there. Before I can think about going to space, I’ll need some lithium to power my spaceship.

I’m sure this was called trilithium in true Star Trek style on the PC. Whatever it’s called, I haven’t got so much as a scrap of it through playing the game so far. I did get a hint that there is lots of it on the 16th level so it looks like I’ll have to properly explore the dungeons next.