This is the final game in the FM Towns Ultima Trilogy. Since I’ve already blogged through Ultima 3 on both PC and more recently NES, I’ll keep this fairly short and concentrate on the differences. Like the other 2 games in the FM Towns trilogy, it has a standalone intro with some still images, CD music and a lot of Japanese text that I can’t understand. 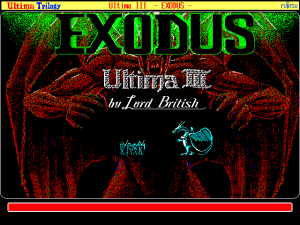 On starting the game, there is a nice rendering of a demon similar to the one on the original box cover and a much improved version of the band of adventurers shuffling back and forth fighting the dragon. Character creation hasn’t been changed and still offers the option of using races that would vanish from Ultima after this game (Fuzzy, Bobbit & Elf). 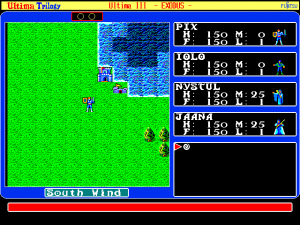 The tile graphics are the same as the rest of the trilogy and the regular overworld music is used once again. This music hasn’t been annoying me anywhere near as much though as you really don’t spend all that long wandering around the main map in Ultima 3. 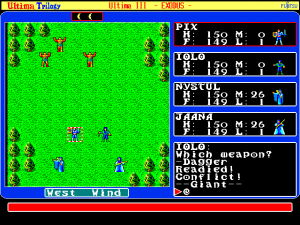 One of the reasons for this is the inclusion of a combat screen which did add a lot to the tactical element of this game even if it slows things down. There is some original combat music which fits quite well and some new sound effects which can be over the top. I see more combat than I would like at the start of the game and it’s tough to survive while my party tries to find their feet. It gets a lot easier when I can equip my front line with bows and start to level up.

When I was playing the NES version recently I would frequently use the wizard and clerics dispel spells to clear whole monster parties. In this version I can only cast this spell once per combat and it doesn’t work anywhere near as often. It’s not entirely useless but my cleric imparticular is almost useless in combat because of this. I end up using her purely for healing and opening chests. Despite this she is slowly advancing in levels with an ocassionally succesful dispel. I can only assume that it requires fewer kills for clerics to progress which is just as well if I’m ever going to get her hit points up. 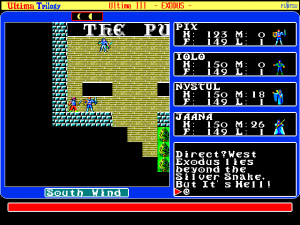 All the towns are exactly as I remember them. There are minor changes to the dialog but it amounts to roughly the same thing overall. I’ve not spent too much time in the towns other than shopping and the occasional visit to Lord British for healing or levelling up. 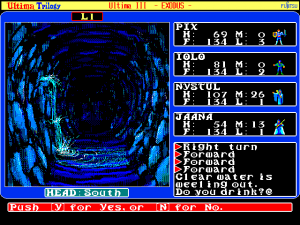 The dungeon maps are just like on the PC also, with identical graphics to the rest of the trilogy. There are some nice new fountain graphics but with the combat screens I can no longer see monsters coming which is something of a loss. With the identical layouts, I settle into my well practiced grinding technique of raiding the same collection of 6 chests at the top of the Dungeon of Fire over and over. With the convenient poison curing fountain on the way out, I can fix up my party if needed and repeat. I combine this with occasional trips to the nearby Perinian Depths where there is an easily reached healing fountain on the second level. 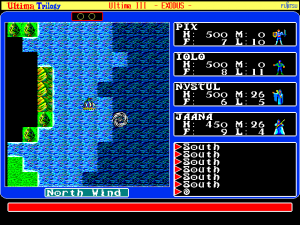 After enough dungeon raiding and my party is now lugging around 9999 gold each. This doesn’t take too long with the emulator cranked up to maximum speed as the dungeons are nowhere near as dangerous as in Ultima 1 & 2. I head for Ambrosia and finding the whirlpool turns out to me much easier than I expect and I head straight in. 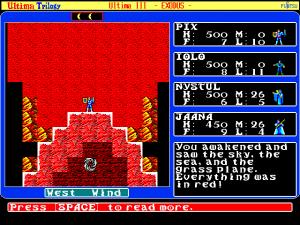 The lost continent of Ambrosia turns out to be surprisingly red but otherwise the same as ever. I realise at this point that I’ve come down here without buying any keys which wasn’t the smartest move. 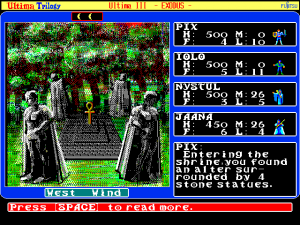 I can still get to the shrine of strength at least so I max out all my characters in that one stat and head back to the surface to start raising some more gold before I go back down. 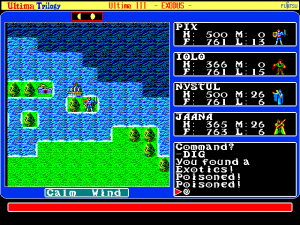 I break this up with a trip to find the exotics which I probably should have done much earlier. After the tough start to the game, I’ve really not been having any trouble with the combat though and this is arguably the easiest game of the trilogy. When playing FM Towns Ultima I and II, there was always some tweak to the gameplay that made them much harder than the PC but this has been near enough an exact duplicate except the better graphics.

I do miss the original Ultima 3 music which would have been a better alternative but other than that this has been a great port. Like all these early Ultimas, the gameplay ends up being 90% grinding but it’s not too bad if you know what you are doing. I’ve yet to go after any of the marks and will attempt to max out the parties significant stats next before I get started on that.